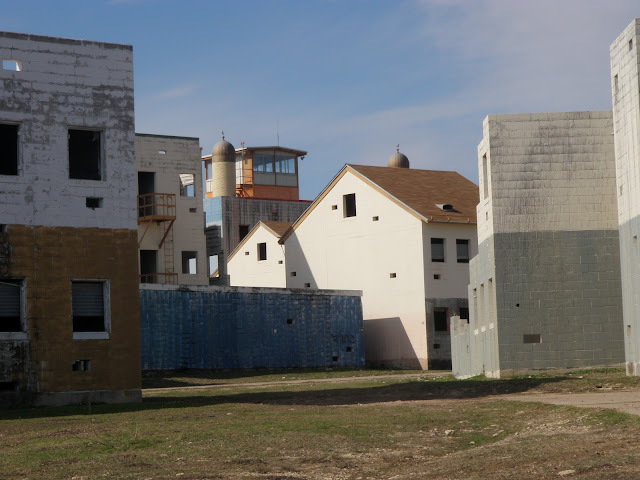 In the morning The Major took me to breakfast after he had finished his PT. We headed south to Fort Hood. The Major had some business t take care of and asked if I wanted to tag along. I said sure I have nothing better to do, I can at least check out the base. We picked up two of his captians and one of his sargents to recon part of the base where they needed to plan a training exercise. This allowed me to see one of their urban training mock cities. Built in the 80s, the mock city is modeled after a typical Eastern European town. The Army has now converted it to look more Middle Eastern by adding Arabic signs and a mosque. "Looks like Bosnia now," I said. Eventually they were done and The Major handed me his keys to his truck.

I drove from Fort Hood to Nacogdoches borrowing my friend’s Dodge Ram Pick up. The truck ran great I actually liked driving it. I’m glad I visited my friend and drove the four hours as I saw some pretty country that I would otherwise never have seen. Ever so often while driving on the 7, a 'historical marker sign in 1 mile' would be posted. After passing a few I decided to stop at one and take a picture of it if it was interesting. I was thinking it would be something cool like “Davy Crokett did this here…” When I stopped at a convenient one, I was thoroughly disappointed. I do not recall what the marker said but I was not impressed and wished that I had just continued driving.

I arrived at about 4PM at the range as I missed the barracks. At the range I saw a LMVT parked at the edge of the first range. Around it was a few of the reservists from Oklahoma. I jumped out of the truck and said hello. I talked with a few, some asking me what I did as I had a DoD sticker on the truck. They must have taught I was some contractor or something as I had unshaven (I forgot to pack my razor and was too lazy and cheap to get one) with longer hair. I let them know I was nothing more than a civilian and the truck belonged to a friend. I went to say hello to Paul who was at the other range. Paul let me know he was going to open up the barracks. So I drove back to the LMVT and talked to one of the Captains. I asked if I could take a look at the truck. The Good Ole Boy said “Hell you wanna git in it.” I replied hell yeah. He opened it up for me and I sat at the driver’s seat and checked out the layout. 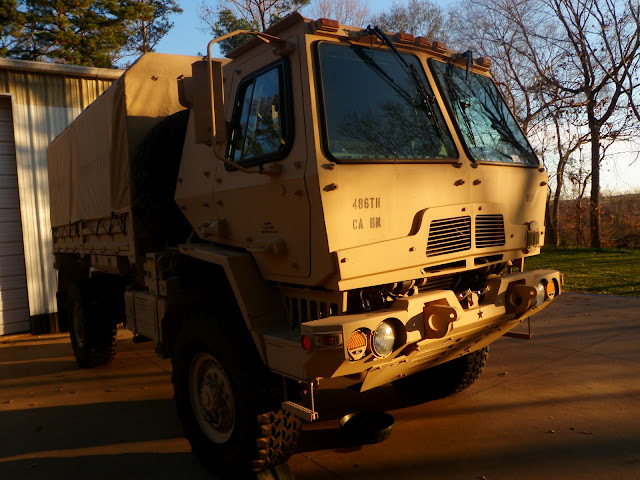 After looking over the truck I headed out to the barracks to meet Paul. He showed me around and let me know where everything is. There were already 15 Army Reservists occupying the bottom bunks. Paul let me know about the clubhouse and let me know only one person was staying there. We drove to see it. After showing it to me he asked where I wanted to stay. I figured the house was fine since I was already there. He gave me the key and took off after a brief chat about the game on his property. I unpacked my laptop and noticed that I wasn’t receiving a WiFi signal. I drove back to the range and found Paul who let me know internet is only at the barracks. So I asked if I could stay there instead. No problems.

When I got went back to the barracks another Captain showed me around which bunks were free. He asked if I wanted to sleep in the same room with a bunch of stinky, dirty army guys, and if I did not he could move his men all into another room. I let him know you don’t need to accommodate me for anything and I’ll just pick a bunk. As the reservists started to make their way back, they introduced themselves.

Later on in the night as more people made there way into the barracks. Two guys dressed in Magpul t-shirts rolling their pelican cases with Magpul stickers. They entered the room I was staying in. I walked in to introduce myself and they let me know they both worked for Magpul. I had thought one looked somewhat familiar, I then recognized him from the precision rifle trailer.

Eventually after some introductions and BSing with everyone we called it a night.
Posted by gourmetsportsman at 10:40 PM