In the Blood DVD 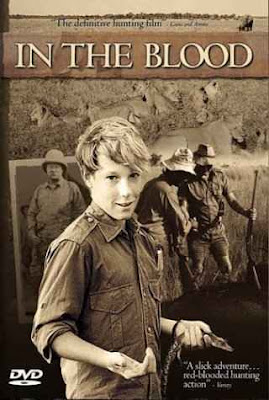 In the Blood is a hunting documentary that should be in every hunter's DVD library. If you can find it I'd suggest you buy it. I bought mine several years ago and at that time it was reasonably priced. I was just checking out Amazon and this DVD is selling for over $100 and in some cases much more.

The film follows a modern day (1986) safari and uses the Teddy Roosevelt 1909 safari as a backdrop. Some Roosevelt's descendants are also on the hunt, as well as Teddy's famed Holland and Holland he'd carried on his safari.

This movie is not a hunting film in the traditional sense. There are hunting scenes and some game is taken but the film is also explores hunting as a conservation tool. For poor African nations who do not have the economic resources to combat poachers, hunting provides an economic incentive to keep poachers at bay.

In the Blood is also a coming of age film centering around 13 year old Tyssen Butler on his first big game hunt. PH Robin Hurt acts as a mentor to Butler and the younger Roosevelt. At the end of the safari, Robin takes Tyssen on his first Cape Buffalo hunt armed with Teddy's H&H. After taking his first buff, as the emotions overcome the young man, Robin encourages Tyssen to cry and says "Let those tears come."

This film is the quintessential hunting film and it should be in any hunter's library if you can find it at a reasonable price.

As the website does not allow me to embed it, the trailer can be found here:
http://www.zimbio.com/watch/Zy2fD8b4uph/In+The+Blood/Theodore+Roosevelt
Posted by gourmetsportsman at 3:13 PM