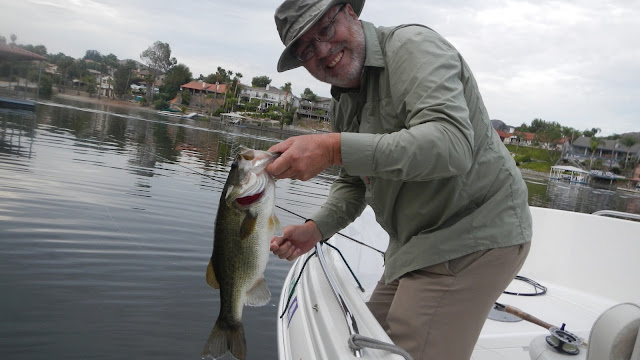 Lately I've been itching to catch some bucketmouths on poppers so when my buddy Luc texted me if I wanted to fish Canyon Lake, I jumped at the chance.  Originally Luc was to fish with guide Vaughn Podmore chasing yellowtail at Catalina this weekend but winds made Vaughn cancel the charter. 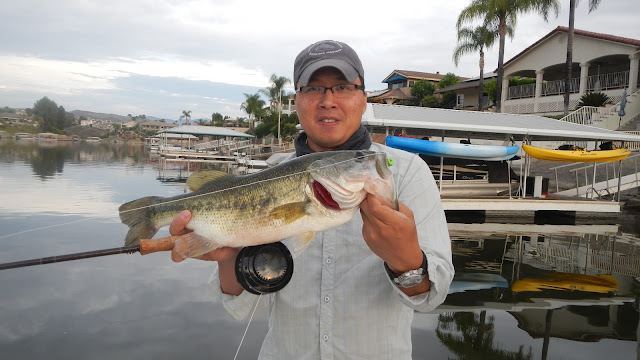 With his trip canceled Luc decided to fish Canyon for the weekend.  Yesterday he invited John and they did well with 20 fish among them in a very short 3 hour window.  And as always Luc doesn't lower himself to fish anything but poppers (at least on his lake).  Today I would join him to try our luck on the opposite side of the lake they were fishing. 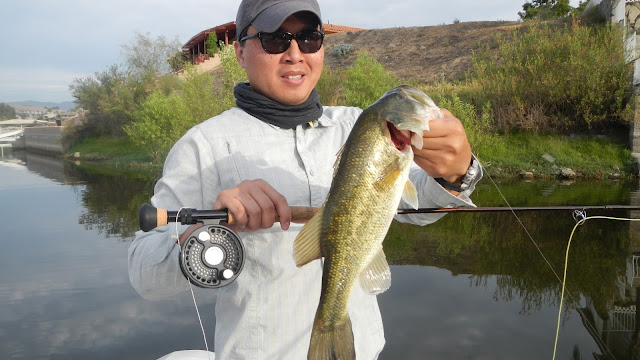 Unlike public Socal lakes, Luc can launch his boat and fish anytime he wants.  So we fished prime time topwater hours hitting the water at 5am which meant I woke up after 3 hours of sleep at 3:30am to arrive at his house on time. 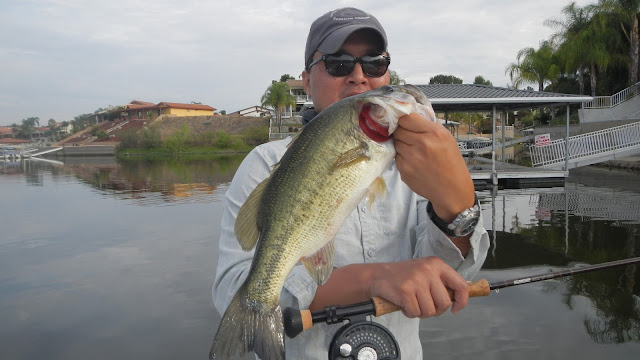 I started with the monster pink popper fly that I caught a beast at Barrett last year.  Luc was the first to hook up and after he managed a handful he suggest I change flies to a white or chartreuse popper.  When Luc makes a suggestion, it is wise to listen.  So I did as I only had one blow up (that I missed) as Luc was already managed a couple. 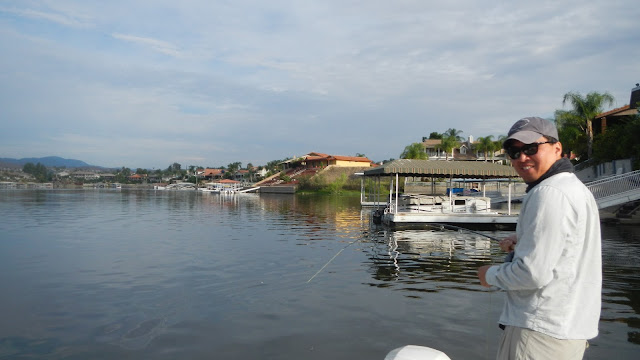 It was not long before I was on.  My first fish was a four pounder with many more that followed.  As always when Luc thought there was a fish sure enough a fish would come to the surface. 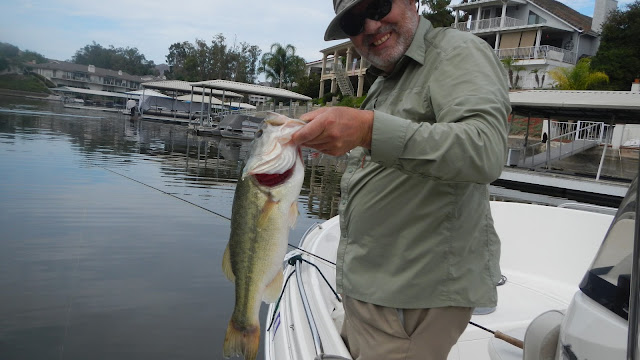 The intention was to only fish to about 9am as the topwater bite shuts down naturally once the sun hits the water but as we had some cloud cover we stay past 10am.  We could have continued but it was starting to get hot and most holes were already hammered by other fishermen so we packed it in.  I lost count of how many fish were landed but it was several, but I lost at least 3 and missed just as many if not more.
Posted by gourmetsportsman at 4:13 PM No comments: 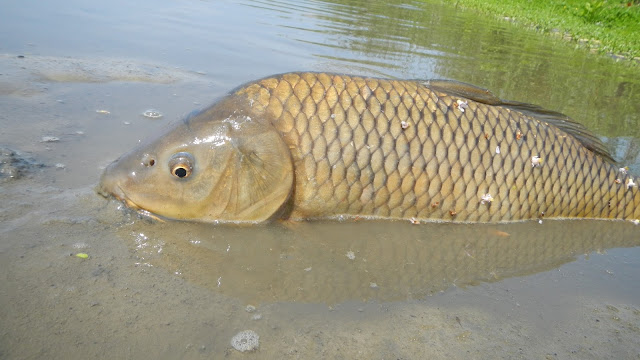 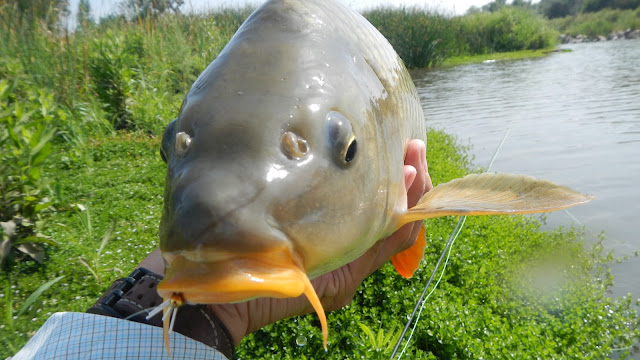 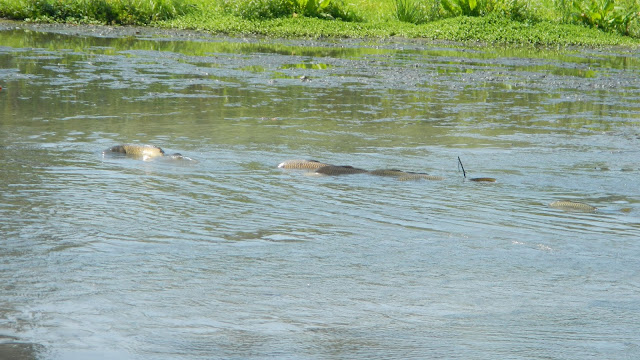 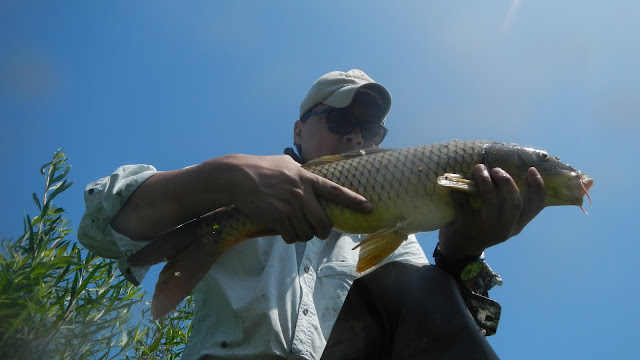 This place used to be like this but its been years since I saw action this good.  It's good to see it back.  While I didn't get my clopper it was a great day.
Posted by gourmetsportsman at 12:44 PM No comments:

Not Exactly The Yellow I Was Looking For 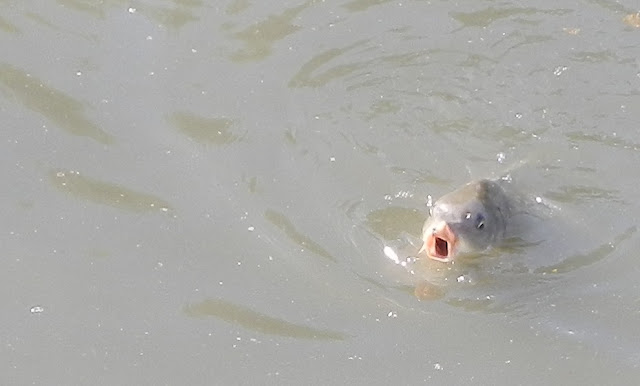 Tuesday I finally made it on board my buddy's boat.  We were chasing the yellowtail that are now up and down our coast.  Unfortunately the trip was a bust.  I didn't even take my fly rod out of its holder.  All we got were a few mackerel on the sabiki rig we were to use as chum.  Called it quits after a few hours when I started turning green.  So much for Dramamine.  It used to work for me.  Now I need to find an alternative. This morning I had a desire to feel the tug so I hit the local brown water.  I debated whether to target bass or carp.  The morning was still overcast, ideal for some topwater bassing, but since the rod was already rigged for carp that was what I'd go after.  Once I hit the water I saw carp clopping.  I've only seen this once before and that time I had no dry flies in my box.  I changed out fly for an emerger dry.  I made several cast but none rose for my fly.  Eventually the cdc got wet and sunk my fly.  I continued to strip the fly as I saw a carp feeding beneath.  It took and spooked all the cloppers out of there.  So much for my chance at getting my first clopping carp.  The carp I hooked was in the five pound range.  I managed another similar in size later on a nymph.  I moved to another area, bushwacking through the reeds only to emerge out of there with a cramping right butt cheek.  I tired to stretch it out and then decided I had a enough for the day.
Posted by gourmetsportsman at 11:00 AM No comments: 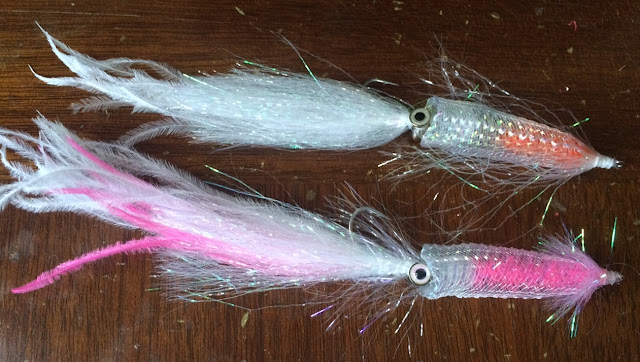 Getting ready for the Summer bite.  Trying it on Tuesday.
Posted by gourmetsportsman at 9:22 AM No comments: 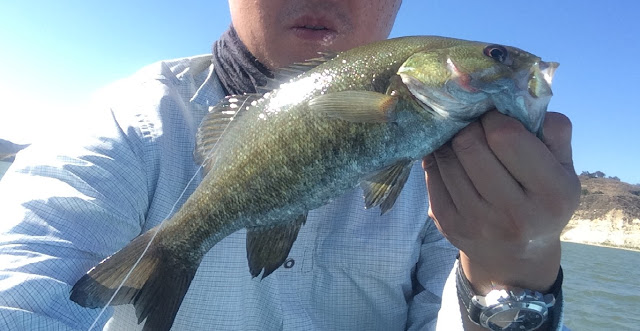 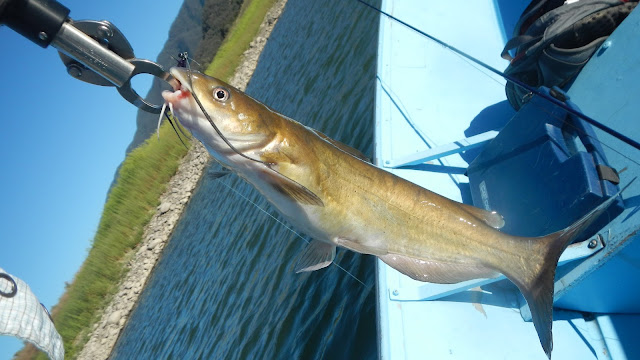 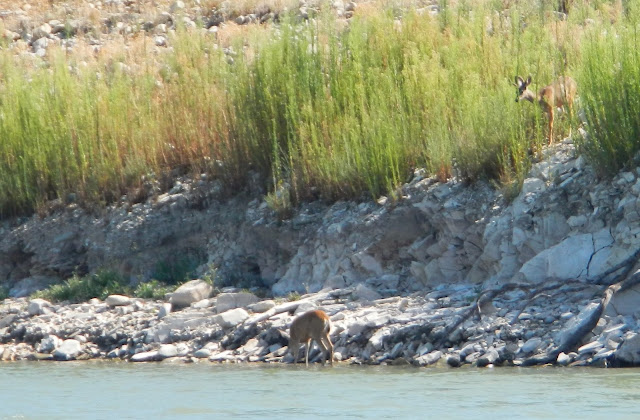 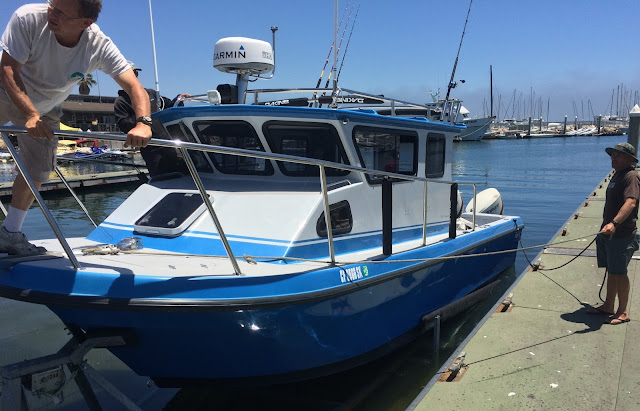 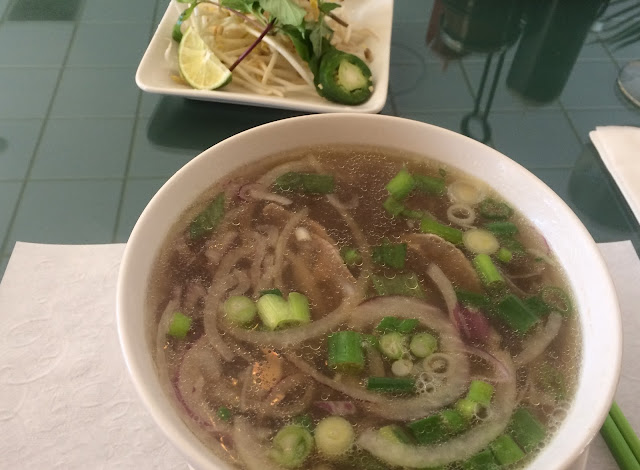 Complaining about the wind while fishing on a workday and living without a boat for a month.  Yeah, we have first world problems.
Posted by gourmetsportsman at 8:28 AM No comments: 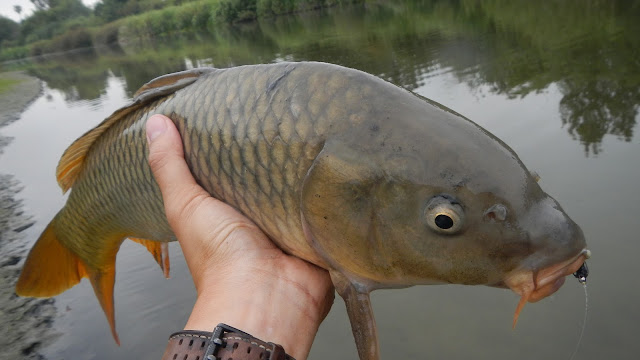 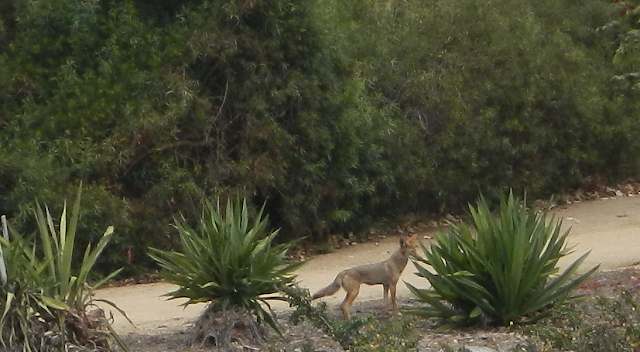 This morning I decided to return and try my luck at carp since I haven't really targeted them in a few years.  Without any polarized glasses and with the June gloom overcast day made it nearly impossible to see these fish.  I considered at one point of going after bass but decided against it and stayed with plan to stalk carp.  After searching and searching I finally saw a blob, a possible carp, in the water.  I concentrated hard on the object trying to figure out which side was the head and which was the tail.  Once I determined the carp's direction I made my first cast of the day and managed to hook him up.  Lazily it gave a half-hearted fight, using it's weight only to avoid being dragging in.  Eventually I landed him and released him.  I searched for more carp but none were easily sighted without polars so I gave up and headed back to the car.  On the way I ran into a coyote chasing a squirrel that he ended up devouring.
Posted by gourmetsportsman at 12:32 PM No comments: 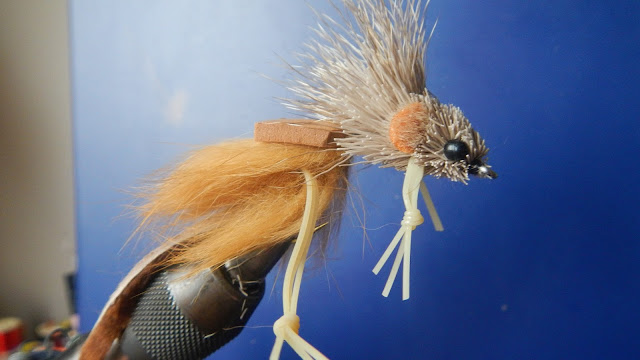 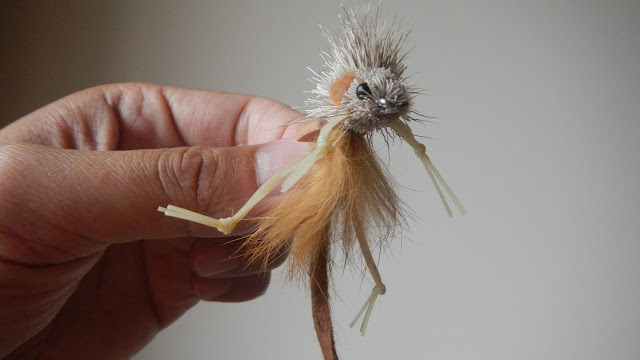 After watching youtube videos of mice swimming, I've rearranged my articulated mouse pattern.  Mouse swim like dogs with most of their body submerged and only the head above water.  To mimic this I decided to wrap the tail end with rabbit strip and add a foam collar to add buoyancy to prevent it from dragging the whole fly down.  If only I had a legitimate trout water to try these out.  There is always largemouth but it's not the same.
Posted by gourmetsportsman at 9:30 AM No comments:

Posted by gourmetsportsman at 3:42 PM No comments:

Wanting to fish for trout, Chul and I hit up a local small creek that I knew would hold fish even with this drought.  I've fished this stretch of water many times in our last drought cycle and back then the fishing was good.  So much so for a long time this was my favorite local stream.  But it's been over a decade since the last time I fished here.  The water is canopied with trees so the water generally is flowing enough to sustain trout even with the lack of rainfall.  This stream always has been some of the most challenging water in our locals.  Casting lanes are few and far between and requires a fair number of rolls casts or bow and arrow casts.  Flies were lost but none on trout.  Fish are spooky, more so than I ever remembered.  Tough day all around as fish were not too readily willing to take and those that did came off as quickly as they came on.  Movement in and off the water is slow and time consuming.  Disappointing all around to say the least.
Posted by gourmetsportsman at 10:44 PM No comments: