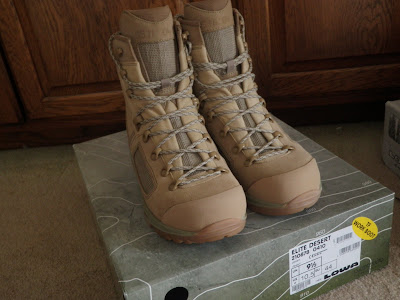 My first real hiking boot ever was a Lowa. I have always been a fan because every pair I've ever worn have been very comfortable. It has always seemed to me that they require little to no break in period. I've never had a blister or hot spot with their boots.

I have acquired two new pair of Lowa boots. My father picked a pair of Desert Elites for me. These boots retail here in the states for over $300 and I've seen them go for over $400. But for some reason, these boots in the UK are going for far less, around $200 USD. I have read that the British SAS and other Special Forces wear these boots. Perhaps there was a contract that was not fulfilled and now the UK has an overrun of these and thus the cheaper price there. My father picked these up from a UK dealer and bought a pair for himself and a pair me for roughly the price of one set that could be bought here.

Other than trying them on, I have not tested the boot. Although on our last hunt my father wore his and said they were very comfortable. One great thing about these Elites are that they are still made in Germany. They are water repellent and breathable and are 8 inches tall. Although these are desert boots they are more than capable for mountainous chukar terrain. Afterall the Brits are wearing these in Afghanistan. One thing I have to get used to is that these boots have closed eyelets. This is because these are designed for paratroopers and open eyelets can get caught or cut up cords. For me this takes some getting used to as all my boots have open eyelets. These boots will be my early season mountain quail boots or hot weather boots. 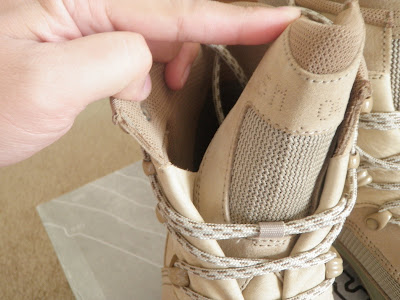 The boot is a combination of cordura and leather. Tongue is well padded and mountaineer styled. 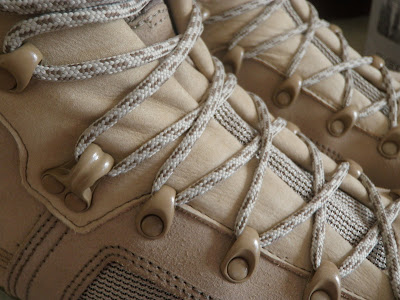 Eyelets are closed throughout. The tongue is attached to a nice soft leather. 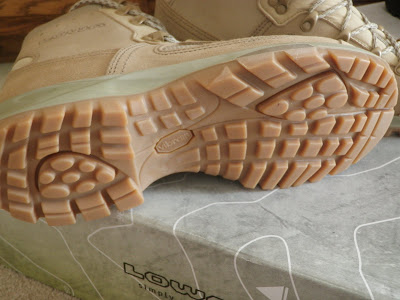 Threads are Vibram and have good grip. 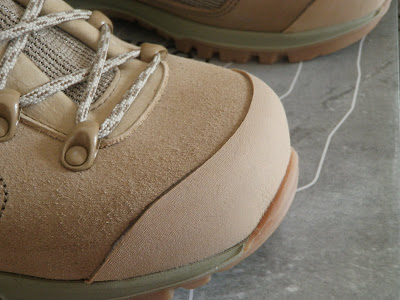 Early models had problems with the toes peeling off. Apparently the knife that cut the rubber had a silicon compound that affected the glue. That has since been rectified. I've read that even with the toe peeling slightly, soldiers were reluctant to turn them in. 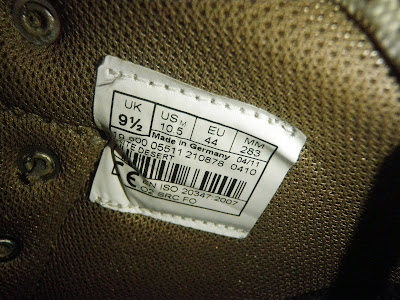 These pair are still made in Germany. The quality is excellent. Stitching is nice and tight. 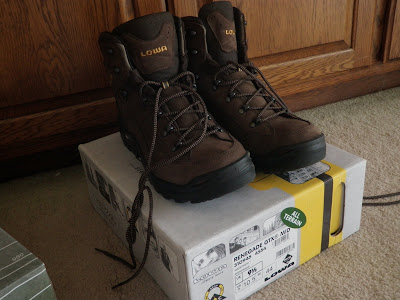 Not knowing that my father picked me up those boots, I picked up another pair of Lowa boots for everyday use or camping. I have a pair or Timberlands I bought years ago because I read that Ed Viesturs wore them. Those were Chinese made junk. I couldn't believe Ed would ever wear a boots like that. I guess he gets them free but since he makes a living mountaineering I would expect that he would go with a more reputable boot company. Maybe he just wears those while in camp and not when hiking to the base camp. Most recreational boots found at outdoors stores are now made in China. Just go to REI and look for yourself. That is just sad. I, for one, will not purchase any of those.

These Lowa Renegade GTX Mids are not German made but at least they are not made in China. It is my understanding that these are Lowas most popular boot selling more units worldwide than some boot companies sell in one year. I can see why. These are some of the most attractive boots on the market. 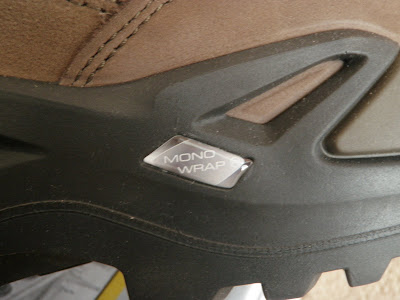 Like every Lowa I've owned, this pair is out of the box comfortable. The monowrap comes up and wraps to the middle part of the boot which not only provides stability and durability but lessens weight as well. 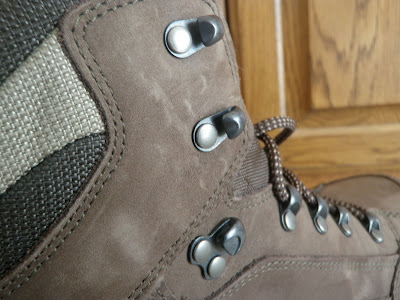 These boots have trekking style lace ups which wrap around the contours of the foot. These are open eyelets. 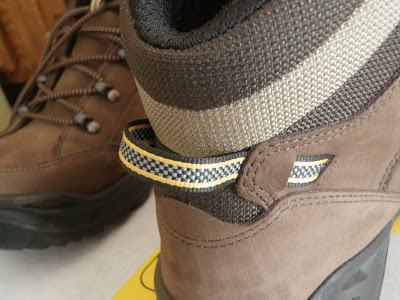 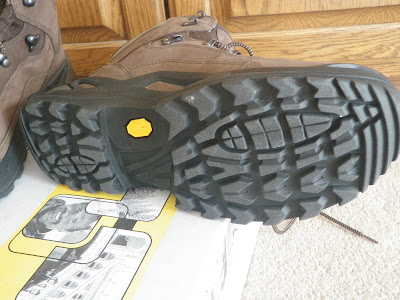 There is a stabilizer in the sole that works like a shank. The soles are Vibram. 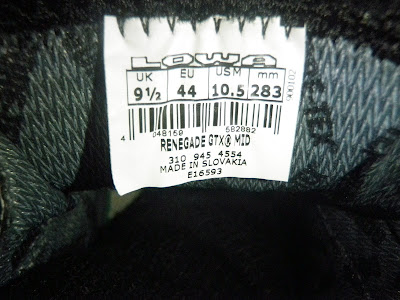 Made in Slovakia. I'll take that to China any day.

So far I've only worn these around town so I can not yet comment how they will do in the field. These boots will be for everyday wear, hiking, fly fishing, camping, off roading and other. Since I'll likely be hunting in the following months, its unlikely these boots will see any "real" use until the hunting season is over. I will however be bringing these to Texas while I take a CSAT Rifle course with Paul Howe in February.

When I get more "real" use out of these two boots I will make a new entry to report.
Posted by gourmetsportsman at 11:20 AM 5 comments: