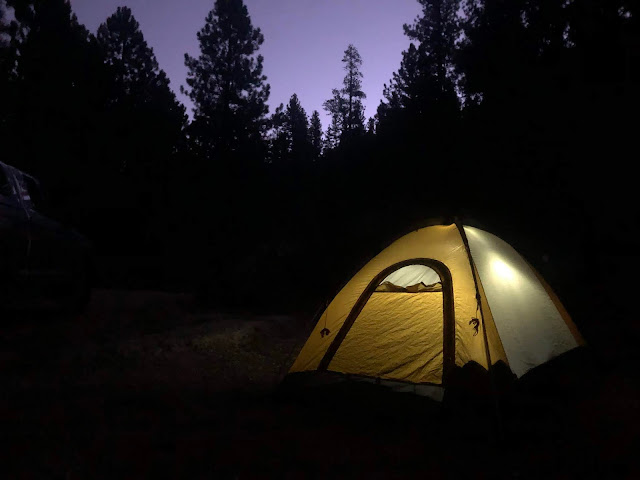 Driving up the mountain past Cedar City, a college town, we were amazed how many vehicles were making their way up the mountain. Were these people going to the same destination as us? After all this was a long weekend. Were these just college kids going to get drunk? Anxiety began to set in until we finally reached our turnoff and everyone continued straight.   Looked like clear sailing from there.

Cedar filled the air as we opened the window driving up the mountain. In no time we were above 9000 feet.  By this time it was past 9 and dark.  We had a late start in the morning and arrived at our destination near mammoth creek late.  Too late to fish as we planned.
At the campsite  it was packed but we found a spot. The only spot left.  Tired and in no mood to take all the gear out of the truck to get to the camp kitchen I made simple dinner langostino quesadilla with fresh salsa.   Went to bed about midnight after that. 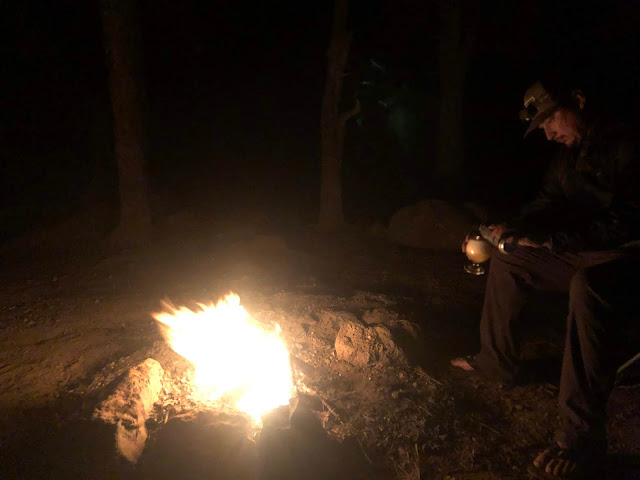 8/31/19
Woke up in the morning still in no mood to dig out the mobile camp kitchen that was buried deep within the truck bed, so for breakfast we ate instant ramen that my fishing partner brought.  I rigged up my small rod and threw a few casts near camp.  Too cold to get a fish to rise as it was still too early.  Our intention was to fish the first night for an hour or so to get our Bonneville but since we didn't make it to the water until nightfall we had a decision to make, skip the Bonneville and move on or stay here a while and fish. 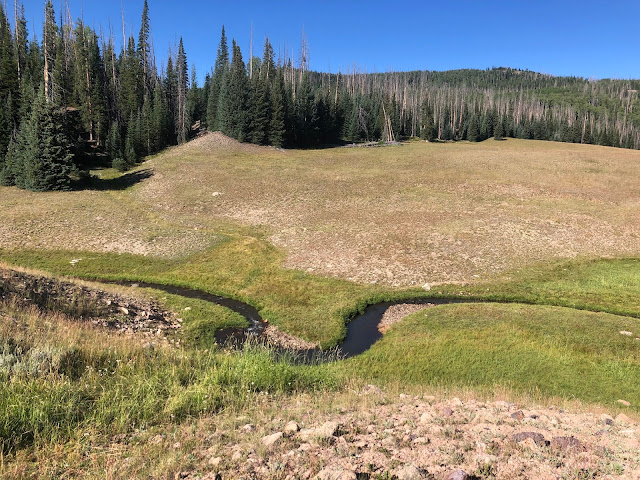 Given this location was the closest to us I voted for us to move on.  We could always come back over a long weekend and get our Bonneville but was vetoed and we choose to stay to try and get our fish.  He said it was only a ten minute drive to the water.  It turned out much longer than that and it was in the opposite direction.  We drove out to the water and parked near the water.  I was already rigged up and headed down to the water and within a few casts had my Bonneville. 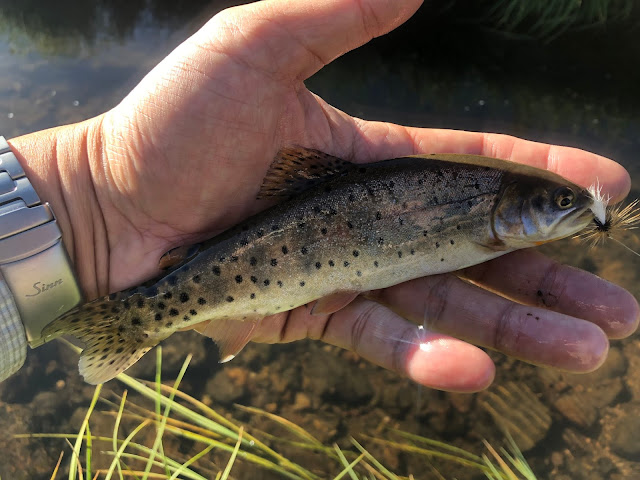 I then had to wait for him to get his fish.  We had to drive upstream a bit to get better access.  We were there much longer than planned and we headed north to our next location to get our second cutthroat necessary for the Utah Cutthroat Slam. 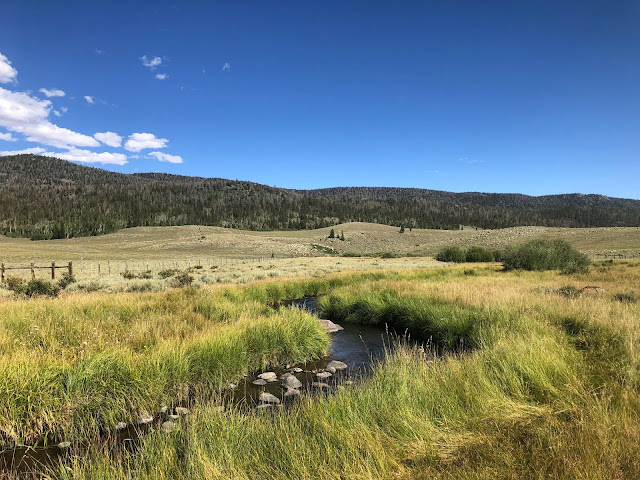 Several hours later we reached our next destination. After taking an off-road trail for no reason, I got us back on track after looking over the map and noticed there was an easier way in.  The detour took us at least an hour and when we arrived at the parking spot I was itching to get out.  I failed to get my Colorado River Cutthroat earlier this year on my Southwest (and Rockies) trout tour so I was ready to rectify that. 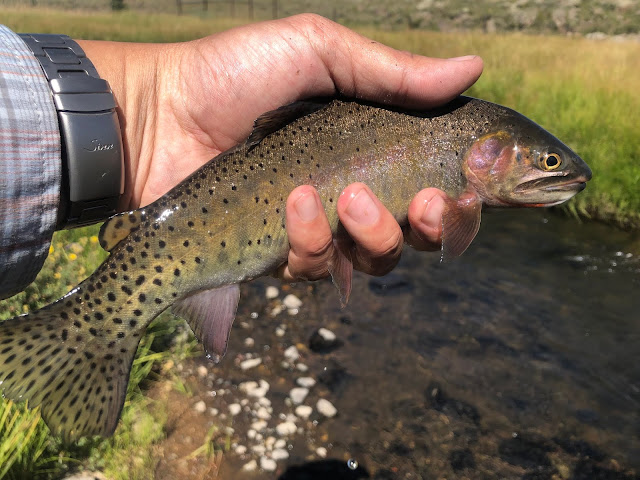 With the detour, we were short on time and were only able to fish a couple hours.  This water holds much better fish and also contained tiger trout.  Some rather large tiger trout.  We noticed one that was at least in the 16 plus inches that refused any thing we threw at it.  Although if I had any nymphs on me I think he might have taken but when fishing small streams I tend to leave my subsurface stuff in the truck.  Had we not wasted time at the first location or had not taken a poor path we would have had more time here and I imagine much better fishing. 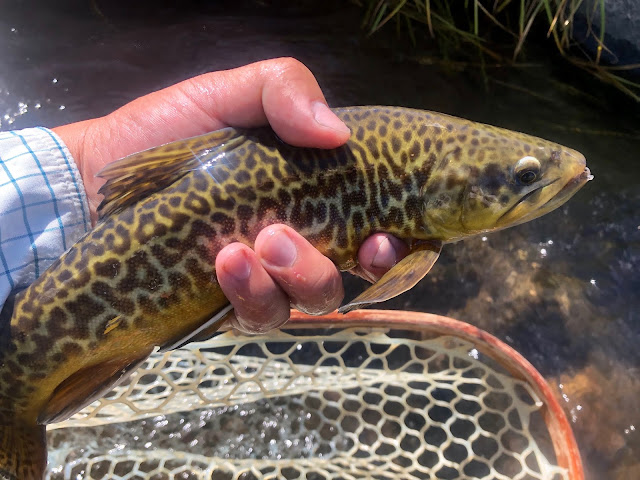 It wasn't long before I managed my second cuttie of the four necessary to complete the slam.  Missed or lost a few  along the way.  Before long it was time to head out to the next location.  My fishing partner never did get his Colorado and wanted to stay.  I vetoed that immediately.    I didn't take time off to catch small fish.  Utah is the closest state to us on this trip.  All these fish can be caught another time without taking a week off work whereas all the other states we planned on fishing requires much more planning and time off.  I didn't want to waste anymore time in Utah than necessary.  I wanted more time in the trophy waters.  So we were on the road again.  Another several hours northbound and we were in the Bear River range. 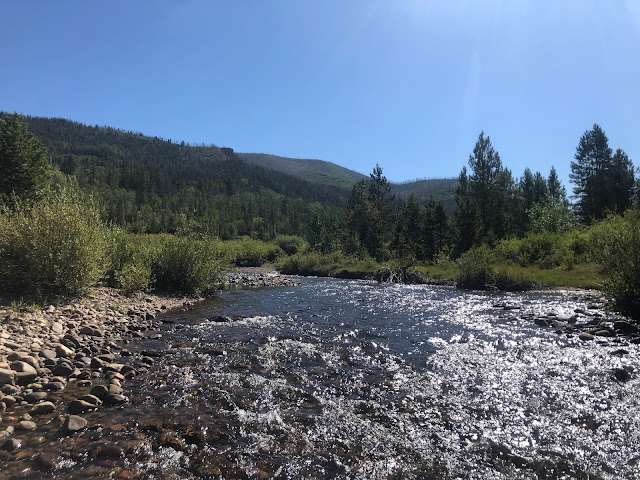 We arrived after dark and with all the campsites taken we boon docked in the National Forest.  A nice site along the river.   Having eaten a quick bite on the road we skipped dinner and went straight to bed after setting up camp. 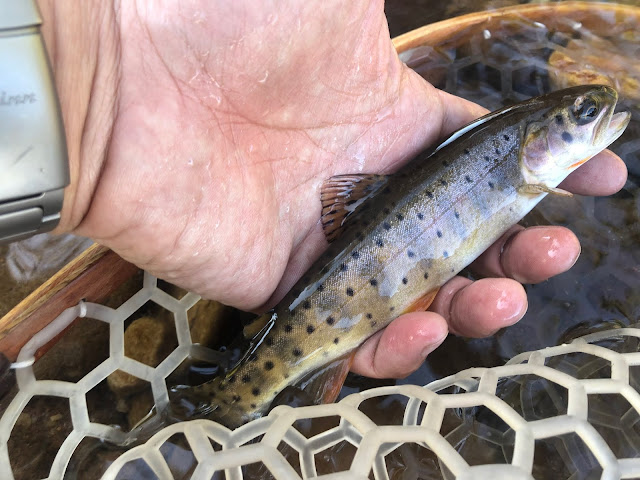 We awoke in the morning had breakfast and drove to the next destination, East Fork of the Bear River, to try for the third species.   This area was popular with the Razor crowd and quite busy but few were actually angling, at least not in the area we were fishing.  I noticed a nice rise early just under a cattle gate that dangled across the river.  While I tried my best to get my fly in position but I simply did not have an angle to get a proper drift and decided to move on to easier casting water.  Wasn't long before I managed my first Bear River Cutthroat.  We continued to fish another half mile or so before calling it quits.  Again I didn't want to spend too much time in small fish water when we were heading to some premium trophy water in the coming days. 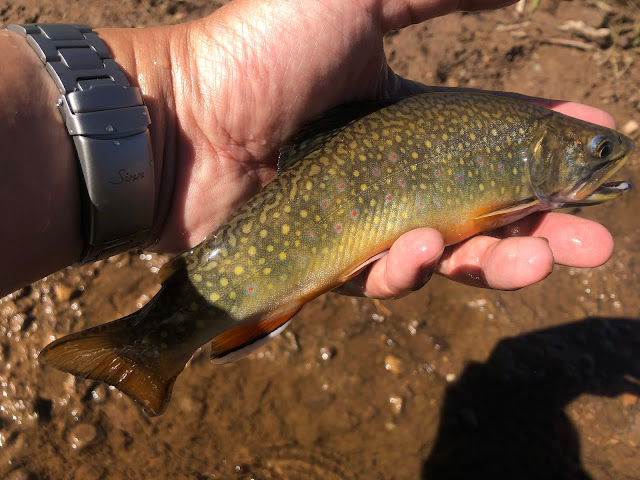 Since the last of the four cutthroat, the Yellowstone, was located in the wrong direction of our route we left that accomplishment for another day.  I'd eventually get my Yellowstone, not in Utah but in it's namesake.  I'll return someday to complete the slam so I can get my certificate and pin but that'll have be for another time.

It was time to start the journey into big trout country.
To Be Continued...Next Wyoming and the Grand Tetons.
Posted by gourmetsportsman at 1:39 PM No comments: