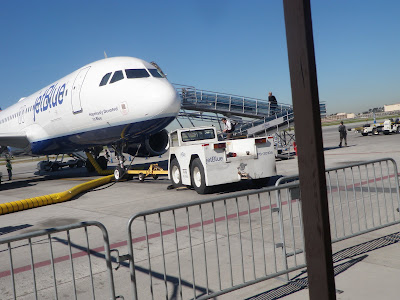 I had my first flying with a firearm experience. It was rather uneventful. I can tell you that, at least at Long Beach Airport, it's a painless procedure. All I did was go up to the counter and told them I had a firearm to declare. Once I did that the gal at the counter asked me to open the gun case. Then she asked me if I had any ammo which I responded no. After which she asked if the gun was loaded. With all the questions answered she dropped the declaration card into the case and told me to lock it up. She placed all the necessary tags on the pelican and moved it to the conveyor line. That's it. With that out of the way I headed to the boarding gate. TSA was professional and didn't fondle my crotch.

Although I have traveled quite extensively, both internationally and domestically, I was the asshole today that held up the line for the metal detector and carry-on scanning area. First I had to remove my laptop from my carry on bag and all the liquid toiletries I had in my carry on. Second my Lowa boots are not quick to remove as they have open eyelets, second I forgot I had some much crap in my pockets, camera, cell, money clip, a metal business card holder, etc. I also forgot my watch was on too. I passed the metal detector at least three times. What a clown.

Once I arrived in Austin I waited at the baggage carousel for my case. I asked the JetBlue desk if they had an oversized pick up section after all the bags came out. They directed me to the right area. My case was just lying there unattended on a conveyor belt for anyone to take. Since they do not check baggage when you leave that was a little disconcerting.

The Major picked me up in full ACUs as he had a meeting run a bit late so he couldn't get back into "civies." We headed north toward his house, not before getting some Texas BBQ at Duke's Smokehouse. "You're in Texas, we're having Barbecue" said The Major. Sounds good to me I responded. We had chopped beef brisket sandwiches. I asked if he wanted a beer with that but he said could not in his uniform so I got him a root beer instead.

After a good meal we headed to his house. After the tour of his "lakeside" home (due to drought there's not much of a lake anymore) we BSed some more and I showed The Major the castration necessary to keep my AR California legal. He laughed as I ripped off all that crap and told him I'm in a real State now. He then asked me if I had ever worn armor. I responded no. He had me try on all his plate carrier and all his gear. The armor itself with front, back, and side plates weighted about 35lbs. I then tried mounting my rifle. It's definitely different and you need to adjust your rifle to accomodate all that gear.

I'll be heading east tomorrow to Nacogdoches to stay at the CSAT facility so I can learn how to properly run this gun. I suppose this and some of the next few blog posts may be a bit out of place in a "life of leisure" blog but oh well.
Posted by gourmetsportsman at 9:25 PM