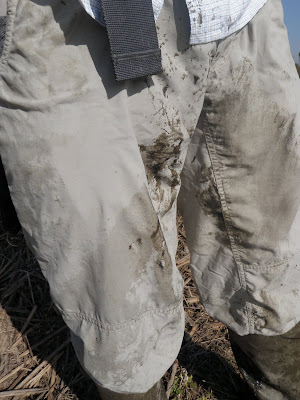 This morning it was not my intention to hit the water but after some thought I decided to head out. With no pending work I needed to get done, I said what the hell. It was just after 10am when I hit the water. With a somewhat overcast sky and the fact the water was high and murky, I knew it was going to be a rather difficult time. I was still fishing the same line I was yesterday. I really should have used another, that line is simply too old and dirty to cast effectively. I blew a few shots because of it.

I managed to come to a point and I look out in the distance and noticed a retriever in the water ahead with his owner walking on the pathway. Great, I thought to myself that dog just spooked every fish in now. The owner paid little attention to him and when the dog came to me, I greeted it only to be jump on with his wet and muddy body. I screamed out HEY! The owner didn't even acknowledge it and called his dog back. Fucking Asshole. Not only I am wet and cover in putrid black muck, now all the fish upstream and downstream are spooked.

Great, after that I basically called it a day.
Posted by gourmetsportsman at 3:17 PM