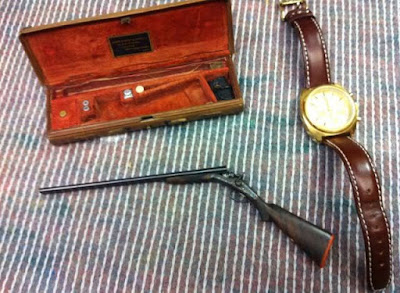 I was watching the youtube video I posted of a Discovery Channel's look into Purdey and for whatever reason I forgot about the mini Purdey that was presented to King George V in 1935.  So I decided to search for my information on the internet.  The gun is fully functional, breaks down into its own guncase and it even has cartridges made by Eley-Knoch, that are just under a half inch long loaded with 1.62 grains of powder and 2.02 grains of dust shot.  According to the video the King used it to shoot moths.  It's a fascinating piece of art for sure.  I wonder if the Purdey were to make one today what the cost to manufacture would be, assuming they could even recreate it. 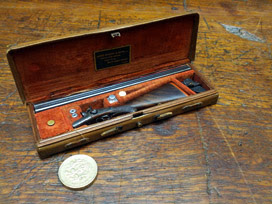 For the Silver Jubilee of King George V in 1935, James Purdey & Sons presented His Majesty with a miniature pair of hammer ejector guns, nos. 25000 and 25001. Built to exactly 1/6 the size of the king's pair of 12-bore guns, the fully working miniatures were supplied with fully functioning ammunition. The cartridges were .47 inches long, .18 in diameter and loaded with 2.02grns of dust shot. It is said that the cartridges cost as much to produce as the guns themselves.  The guns and a complete box of 25 cartridges are preserved in the Royal Gun Room at Sandringham.
Posted by gourmetsportsman at 10:40 PM

Email ThisBlogThis!Share to TwitterShare to FacebookShare to Pinterest
Labels: art, fine gun, fine shotgun, Gear, side by side, wingshooting