I'm home writing this blog entry with sore blistered feet from hiking over 10 miles in my bootfoot waders.  I thought I wouldn't make the same mistake as I did yesterday and wore my waders all day long.  My feet are paying for it now, they are sore and starting to blister.  Kaiser is the same with ripped up paws.
Last night I decided that I would spend this morning jump shooting the river after all the birds I flushed the previous day.  But before I started, I wanted to check out a couple nearby lakes.  The first was frozen solid and the other was half way frozen.  The open water held several birds including mallards, mergansers, buffleheads, and various birds I could not distinguish with my binos.

After checking out the lakes I moved toward the river.  I decided to fish the same section as I did yesterday but I would start further down today.  Within a few yards from the truck, I flushed a single greenhead but since my firing lane was obstructed by vegetation I moved quickly to my right and shot, by this time the drake was 35 years or so out.  I missed the first shot and tracked him for the second barrel.  I missed again.  By the second shot 10 more greenheads flushed further down.

After cursing my lousy shooting I moved down flushing even more greenheads.  This time about 6.  No shots were taken as I had no shooting lane.  I moved down.  And about 1500 yards I spotted a herd of Elk including a number of bulls.  We stood there cautiously staring at each other as took pictures. 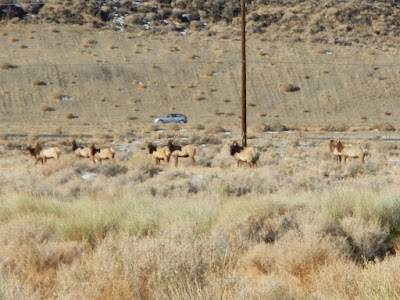 Once I had my fill of these elk I carried on with my waterfowl hunt.  I continued to flush birds out of the river.  All birds were mallards and I passed on several because they were either out of range or they were flying towards the opposite bank.  I finally flushed 6 out of the water that flew toward my side of the bank.  I check all of them looking for the drake but found none.  I took aim at the lead bird a hen (hens are permitted up to two here in CA).  I shot and I saw her flinch and shot again.  She turned toward the opposite side of the river and started flying away until she dropped out of the sky once she cleared the river. This time I made sure to mark the bird properly, she fell next to a power line tower.  I spent the next hour looking for a spot to cross the river where the dog and I could cross easily.  Another day and another lost mallard, I was beyond pissed.  I continued down the river and continued to push birds but never had a good opportunity for a shot. 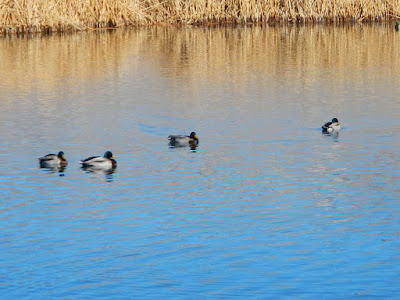 While along the bank, I nearly had a heart attack as a Navy F18 Hornet buzzed me.  This pilot was literally only a few stories high.  These planes literally are silent until they pass you thousands of yards away.  Trust me you don't want to be a Taliban or Iraqi insurgent as these planes will drop their ordnance on top your head before you even hear them coming.  After I double checked that I hadn't crapped my pants, Kaiser and  moved on.  We were in an area close to the hill we were pass shooting on the first night when a covey of valley quail flushed.  Because quail are always a possibility near the river, I carry number 5 bismuth rounds for both small ducks like teal but also for quail as well. I couldn't believe how far we hiked.  My feet were now killing me.  We run into a pair of hunters and after chatting them up we headed back to the truck.  It was a long hike and we didn't run into any birds on our way back.

Once we made it back to the Rover, we loaded up on water and rested a bit before deciding to visit my friend, Dave who lives in the area.  When I reached Dave's office, he was out so I started to scout the area near his home and found the pond my friend Kelly and I enjoyed hunting the past few years was frozen solid as well.  After an hour and half I headed back to see Dave.  He was in the office and we chatted, catching up since we've not seen each other since I last hunted this area and stayed at his house.  He suggested I hunt the pond and I told him its frozen.  Shocked, he suggested I break up the ice and throw a couple dekes and see what happens.  Its been successful for him in the past.  Since my feet were in no condition for anymore walking I gave it a try. 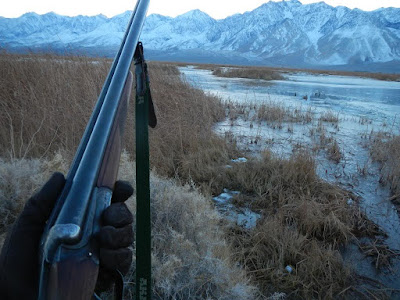 I broke up the ice, and cleared about a 10 foot diameter and threw 3 dekes in there.  I had about an hour of light left and sat behind some brush waiting for some passing birds.  Within that hour I saw two groups of 6 fly over.  But none wanted to come in.  My lousy calling did not help.  Its been too long since I've and its more than obvious that I'm out of practice.  I mean I really sucked.  With about 15 minutes of light left I gave up for this outing and started to pack up.  With the end of the season fast approaching, I'm hoping to make it out again but with the old man next time.
Posted by gourmetsportsman at 11:30 PM