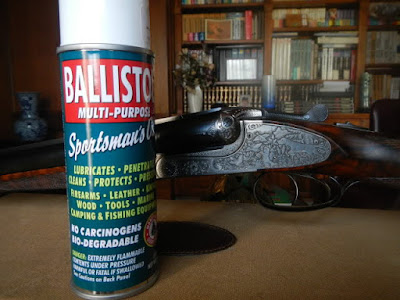 Decades ago while looking through one of my old man's issues of an old German outfitters catalog,  Frankonia, I came across this stuff call Ballistol.  Since I did not read German, all I could decipher was that it was some sort of gun cleaning oil.  Remember, this was pre-internet days so information was hard to come by.

Fast forward to a few years ago, I ordered a catalog from another German outfitter, Akah.  While perusing through the pages, I came across this stuff again.  The Akah catalog is written in English so I could read about this stuff.  It is a mineral oil based CLP (cleaner/lubricant/preservative) that is nontoxic and safe for all surfaces-metal, wood, plastic and leather.  Over the years I forgot about this stuff but it wasn't until I saw a youtuber post a video about this stuff did it spark my interest again.  I goggled it and looked for a retailer that sold it and ordered a few cans.

Being nontoxic, I really like this stuff despite the smell.  Some say it smells like black licorice, I think it smells like ass.  All I can say it works.  Before the season began I used it to clean the barrels of my Darne R13 and Merkel Model 8, both were in dire need of a good cleaning.  I had shot B&P spreader loads in both those guns for years without really cleaning the barrels.  Those spreader loads are notoriously dirty.  Prior to Ballistol I had tried various gun cleaners with little affect so I basically stopped cleaning the barrels out of laziness but since modern ammo is noncorrosive I really didn't mind.  I finally had enough and it still took me a long time to clean those guns but I finally got those barrels clean.

Originally made for the German army, Ballistol has thousands of uses.  This stuff is great and use it for anything.  I spray down a rag and wipe the entire gun with it including the wood and leather sling.  Although I've never tried it but I have read that it has been used for minor cuts and scratches.  Its truly a miracle oil.  Because it emulsifies with water, its great for an all weather lubricant.  So if it rains, the rain doesn't wash off the oils.  It does not dry or congeal.  Seal Team 6 and the USCG have adopted it for weapons maintenance in the early 90s if that convinces you.  German shooters and hunters swear by this stuff.  For me that was good enough for me to try it.

Posted by gourmetsportsman at 3:20 PM