Happy New Year.  Hopefully my new year will be better than the last few weeks of last year.  I had the intention of hunting the last week of the pheasant season but due to a serious illness that plan went to shit.  My new plan was head north and see if I could get Kaiser his first mallard.
With all the nasty weather we had the last few weeks I figured the waterfowl must have finally started to move southward.  Since I did not want to spend five hours on the road just to find out I was wrong I confirmed my hypothesis by call my buddy Bill Calhoun to see if there were waterfowl in the Owens Valley.  He confirmed that the birds have moved down and he was able to take a couple mallards, a widgeon, and a few green wing teal just before Christmas.
Since I was still not 100% I waited until after new year to make my way up.  I arrived to my first spot around 3pm only to find that this pond was frozen.  I moved north to my next destination only to find that the entire spot was dry.  I know that the LADWP creates ponds throughout the Owens Valley and they move them every few years.  So I imagined that they just moved it to a new area.  I later found out by a hunter here at the motel that Mammoth got very little to no water last year and DWP isn't moving water.

I moved to my last spot, a small pond I knew that would be in the pathway of waterfowl that would be making their way back their night roost.  I arrived at this spot with about a hour or so of light.  The pond was clear of any waterfowl except a number of coots, so I made my way down the river looking to jump shoot a duck or two.  Kaiser and I made our way down south and flushed a Ring Necked duck it flow south away from me and then turned back north just above me.  I took the bead of my Merkel Model 8 and took him with a number 4 Hevi-Shot Classic Barrel out of my right barrel.  He plopped into the water and before I could call Kaiser I heard him dive into the river to retrieve it.  This was Kaiser's first river retrieve.  I imagined to capture the retrieve on film but not the shot.  I'll upload it when I'm home. 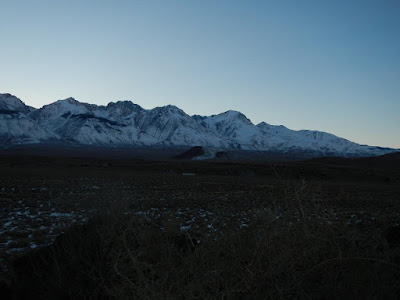 Sunshine was making its way to bed so I moved toward a hill where I gathered would be a excellent place for some pass shooting.  I made it to the base of the hill and noticed 5 mallards just overhead but I noticed them too late.  Even so I figured they would be too high for a reasonable shot.  I made it to the top of the hill and only saw two singles in the next hour and a half.  Only one was within a reasonable shot distance and I managed to muck that one up.﻿﻿

Posted by gourmetsportsman at 8:37 PM