Vogue Magazine and Shotguns? Now I've Seen It All 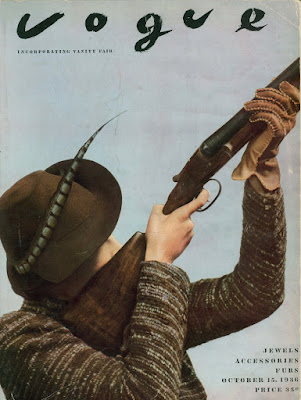 While searching the net, I found this cover of Vogue magazine from their October 15, 1936 issue which shows a lovely lady shooting a side by side wearing a brown hat and a pheasant tail.  At least the lady has style sporting a SXS with double triggers.  It's the only way to go for a true sportsman (or woman).

This cover made me think, would I ever see such a cover in my lifetime on the current Vogue?  I highly doubt it but I've been wrong before.  If they did though I'd buy it.  But I'm sure my $5.99 is safe from that.  I wouldn't doubt that those NY-types with the current Vogue have probably burned this cover and wiped out any evidence it ever existed.

Anyways it would be interesting to see what the current Vogue equivalent of this cover would look like?
Posted by gourmetsportsman at 11:20 PM

Email ThisBlogThis!Share to TwitterShare to FacebookShare to Pinterest
Labels: art, fine shotgun, side by side