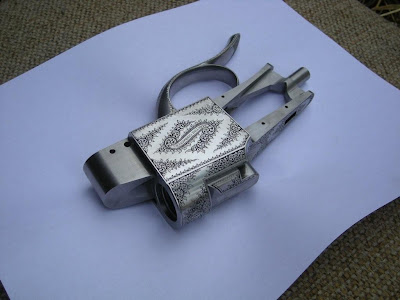 Ralf Martini sent my father an email letting him know that his action is back from the engraver Warren Smith and sent him some photos.  My father was surprised that engraving was different from the design he had chosen.  These things happen.  My father chose a very simple scroll and he is now deciding whether or not he wants to keep this design or have them redo another action.  Actually this design is more ornate than the one he had chosen and once case colored would look quite nice. 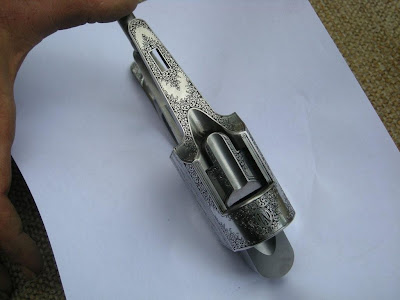 The decision is not mine as this is not my gun but my father did ask me my opinions about the design.  I told him, "you put a lot of money into this gun, especially since the dollar has weaken considerably against the Canadian dollar since ordering it, if you don't like it have them redo it."  I did tell him to have Martini send him a photo of a past action with the same design that has been case colored so that he can decided whether or not to go with this engraving.  I guess he has some serious thinking to do.
Posted by gourmetsportsman at 10:06 PM