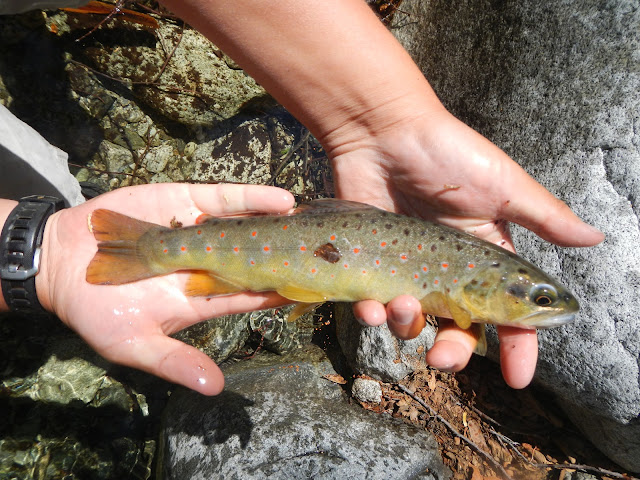 After being skunked on my last two fishing outings, I needed to get the stink off and get on some easy fish.  Knowing Chul was not feeling well and likely to call in sick to work, I managed to coerce him to get out fishing (it was not hard).  Nothing better than getting some fresh air (if there is such a thing in the LA basin) for when your feeling ill.  Who needs rest?  That's just an old wives' tale.  Just hike a few miles while fishing I'm sure that's what the doctor orders.  No wonder I never made it to Med school. 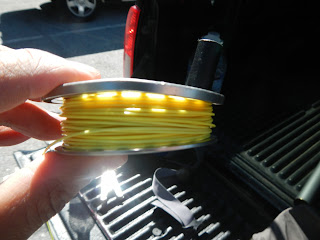 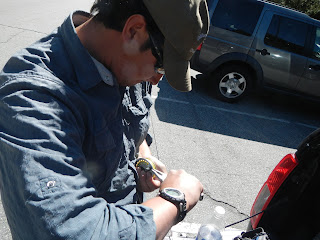 Chul let me know he was not up for work but up for fishing.  So I arrived at his house and we set off to fish some tributaries that he has had some success in the past.  Since breaking his 3 weight, Chul has been borrowing some of my spare rods.  I had brought him my GLoomis GL3 6'6" 3 weight, the first rod I ever built but since I was using my NAC 4'9" 3 weight I did not have a spare reel for him.  So I told him to bring his own reel.  When we arrived at the parking lot we began setting up.  Chul opened his reel case for his Battenkill II only to discover that the reel had been smashed and no longer rotated.  We could only conclude that it must have happened when he fell on his rod when it broke.  But if that were the case how in the world did he reel in the line?  Although we tried to fix it, it was no use.  With no other spare Chul's only option was to pull out a few feet of line and fish with only that amount and hoped he didn't need more.  All we could do is laugh at it and Chul was seriously handicapped.  Fortunately SoCal streams only really require a few feet of line to fish but even still it must have been annoying.

With my fish in the first pool unwilling to rise at the fly I presented them, I moved to the next pool.  On the second cast a trout rose and hit my fly hard.  I set the hook and felt the rod bend to the handle and shake.  This was a good fish.  All the sudden the line went flying back at me and went limp.  The knot had failed.  Damn.  It would be about an hour later before I'd feel another fish.  In the meantime, we continued up stream, pool hopping.  While fishing a hole, I was chatted up by a hiker with his Britanny and he told me that he fly fishes the Owens quite a bit.  He asked if there were fish in the creek. I replied yes.  He asked if they were brookies, this is the second fly fisherman that I've met on a SoCal stream that has asked the same question.  Is there even any brookies in SoCal?  Has there been?  To my knowledge no.  I wonder why fly fishermen who I meet here always seem to ask?  I let him know for the most part there are browns in this water. 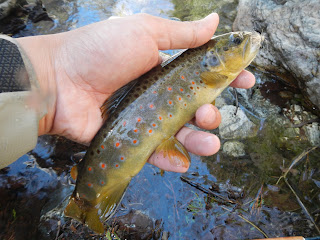 We said our farewells and I moved upstream toward Chul.  Once I made the bend I saw Chul fighting a fish.  The rod was bent to the cork and while moving toward him hooting and hollering the trout came off once I came near.  After some cursing, he said that fish was likely 15 or 16 inches.  Oh man.  He said we were coming up to some pools that hold some serious fish.  When we cam up on one, he let me have it and I casted to the left of the pool.  In front of me not a few feet was a large boulder, a large nose came up and took a fly.  I casted again toward the center of the pool and a brown took.  Not the one with the large nose but nonetheless and  decent fish.  I released him after admiring his coloration.  All the fish had blue halos around their red spots.  Some even had faint blue par marks.  In my mind I figured the pool was now finished but I decided to cast in again this time to the left.  After a few casts, another brown took this time bigger than the last.  Again it was another beautifully colored brown.  It was not the big one that lives in the hole but I was happy with it.  We moved on. 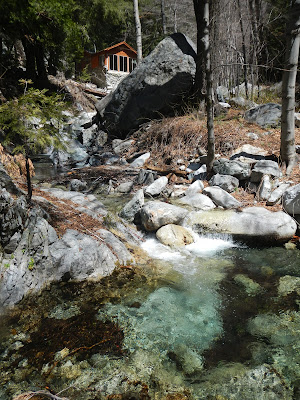 Chul and I separated for a while and when we met up again I was on a hole tying on a new fly.  I told him to fish it while I was preoccupied.  I wasn't watching what he was doing as my face was down trying to get the leader through the eye when I heard Chul start cussing.  A nice brown took his fly but he set the hook to early and ripped it out of it's mouth.  He continued to cast in the pool and eventually managed to get the old fish to take again.


We continued to about 1:20PM  started to head out.  For whatever reason , Chul was telling me, the fishing is usually better.  Maybe bait anglers are taking the fish out as he told me its usually not this tough.  No matter though.  We only managed a handful of fish but today was more about quality than quantity.  I at least got the skunk off me from the last two fishing outings.  I managed not to face or ass plant myself this outing but did almost manage to twist my ankle.  I don't know what is going on with me and trout fishing lately maybe I'm just getting old.

We stopped by a Mexican restaurant on the way back to Chul's house for lunch which was quite good.  I ordered the heart and gut busting carnitas wet burrito. 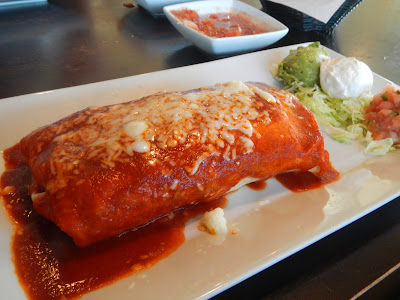 Posted by gourmetsportsman at 6:37 PM