Could Have Been Worse 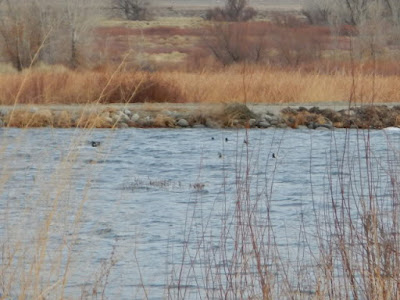 The morning looked promising as I found a new pond that was holding two drake canvasbacks, several scaups, and a few ring necks.  With little cover I had to nearly crawl on may stomach to get within shooting range.  Since I don't believe in sluicing birds I waited until they spooked and launched.  Once they did I focused on the canvasback and was dead on but the bird flew unphased.  Expecting the bird to eventually fall and therefore keeping my eye on him to mark him, I didn't even bother emptying my second barrel.  Without even flinching the bird continued to elevate and simply flew north.  I left in search of another pond that I found frozen solid.  Afterwards I moved to the river and hiked about 2 miles before heading back to the truck.

Before I got the shot off I saw a local here at this pond.  We chatted for a while and he gave me the inside scoop of where to find birds.  One spot was the exact spot Bill had success and had let me know about last week.  The local, Bob said all the big birds and stacked there now.  So I decided to head up in the hopes of getting Kaiser his first mallard.  Like the last time I was worried about the road that is now covered in snow.  Like Bill had told me, Bob confirmed all was needed was 4x4 and I should be okay.   With that intel I headed up to elevation. 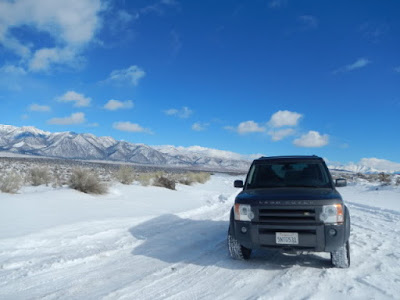 The road was no problem and I made it to the spot.  The problem now was that the snow was knee high at some areas.  Without any snowshoes, this was extremely exhausting.  I glassed to see if I could find any birds but did not.  Kaiser was having to jump over the snow just to move so I decided continuing was not a wise decision and headed back to the Rover.  While I was up the mountain I chose to do some more exploring.  As I made it to a snow covered road I made it all the way to a section where the tire marks were not as packed.  It was here I decided that it was best to head back.   When I put the truck in reverse I got stuck.  Nothing more demoralizing than getting stuck without anyone to help out.  Getting my packable shovel out of the rear compartment I spent the next 40 minutes shoveling snow out of the way of the tires.  Since the elevation over 6900 feet, I was exhausted after shoveling.  I was able to move the truck about 10 feet before I had to get out and start shoveling again.  After realizing I had the LR3 off road program on "snow" I moved it to "rock crawl" since the program is much more aggressive with locking center and rear differentials.  Once I did that I managed to get on packed snow and get the hell out of there. 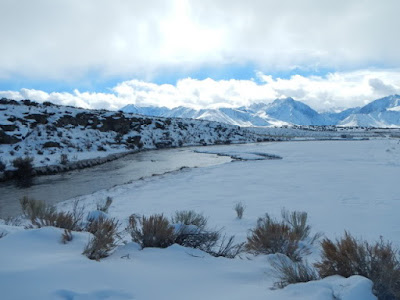 With that debacle behind me, I moved down to the valley floor returning to the pond I found earlier this morning.  This time even more canvasbacks were among the birds.  There was at least 6 of them.  this time these birds stayed way out of shotgun range and I could not even get a shot before they left.  Today was a rough one but I suppose that is hunting but at least it could be worse...I could be this guy:
I walked a different section of the river again but was unable to find any waterfowl.  This section has lower banks and lower water flows.  If I had shot those mallards I shot last week here I could have easily recovered those birds as crossing the river would have been a cinch.  With no birds in sight I moved back to the pond in the hopes of pass shooting some birds.  Biting wind made staying there unbearable.  I left just before sundown as absolutely no birds were flying.  Hopefully tomorrow... 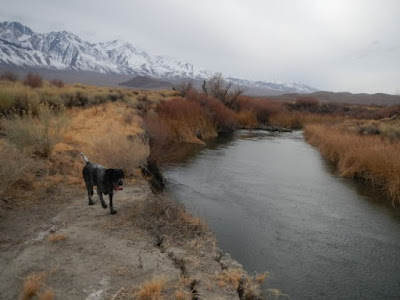 Posted by gourmetsportsman at 8:56 PM