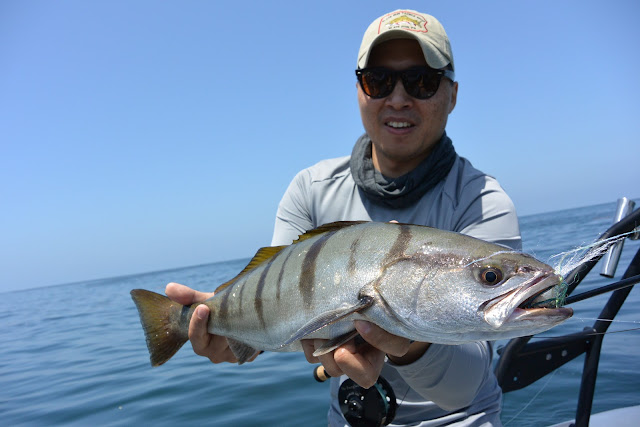 A few months ago my buddy Joel sold his old Zodiac and upgraded to a wider and longer version.  As with the old boat, he gave a key and gave me access to it to use anytime I wished.  The fishing has been somewhat slow so I hadn't taken the boat out for a while until Thursday.  Joel has been telling the kelp forest has been producing bass in large numbers so I called my buddy Jacob to see if he wanted to head out and give it a try.  I've taken him out a few time and on each occasion its been rather poor.  Of course this has been partially because of cold water and the lack of a good moving tide.  Now that water has warmed and the tide moving rather well this day I figured it would be a good day as any to give it a go. 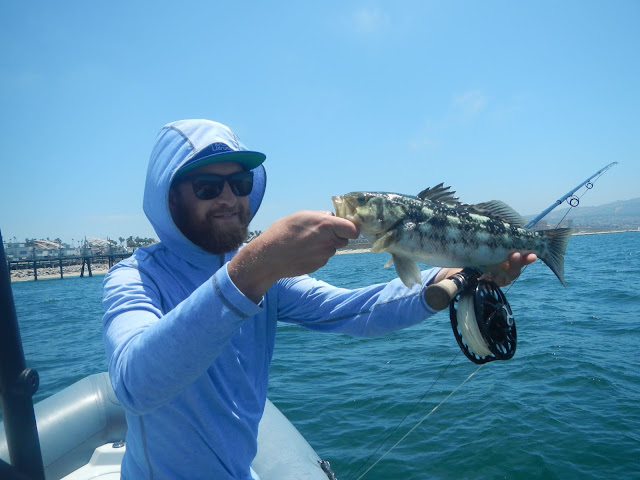 I debated on whether to stay and fish the breakwall or head out to the kelp forest.  I would decide once I made it out of the bay and check how many fishermen were actually at the wall.  If there were many I might have stayed there but since only one kayaker was there I figured it was probably slow.  So I headed south to PV.  On my third cast I got hit.  It felt heavy but I was unsure it it was just the kelp but once it began fighting I knew I was on.  I saw a elongated silvery fish.  I thought it could be a white seabass or a bonito.  After pulling him through the kelp I realized it was a WSB.  It would be my only fish of the day.  Jacob would land two calicos, one of which was a decent fish.  After about 3 hours of fishing we'd head on in for lunch before calling it a day.
Posted by gourmetsportsman at 7:49 PM