Would Have Been An Exciting Outing... 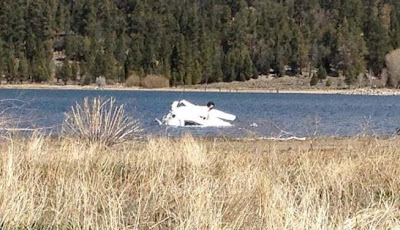 Last Saturday Chul spent the day taking his pram out with his girlfriend fishing Big Bear Lake.  While they saw fish, they got the skunk.  They should have went out yesterday.  It would have been way more exciting assuming they went unharmed of course...

BIG BEAR LAKE, Calif. (KTLA) — A single-engine plane attempting an emergency landing Saturday morning instead crashed into Big Bear Lake, authorities say.
The plane went down just after 10:40 a.m. near the lake’s south shoreline, according to San Bernardino County sheriff’s officials. The plane carried a handful of passengers, several of whom were able to climb out and help the others to safety.
Paramedics treated two passengers on the scene for minor injuries.

If they leave that plane in the lake it would make good structure for the bass and the panfish.  I'd cast to it.
Posted by gourmetsportsman at 6:49 PM