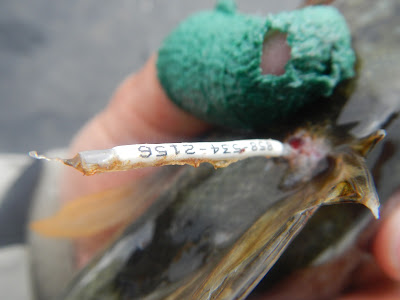 I managed to take advantage of an open invitation to fish San Diego Bay's jetty wall and after getting some intelligence from the guys at Marriott's yesterday I spent the entire night tying like mad.  I have plenty of flies to last a couple lifetimes but I have very few with weedguards.  I generally don't use them for the type of fishing I do. 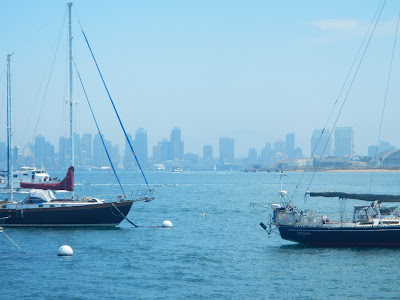 Although I've been itching to fish this bay for years, I've never made it down there.  Webb has been telling me all about it for years and what really sparked my interest is the small populations of incidental catches like bonefish and Jack Crevalle.  As I type this I'm in zombie mode.  I only spent maybe one hour last night before having to wake up and make the hour and a half drive down south. 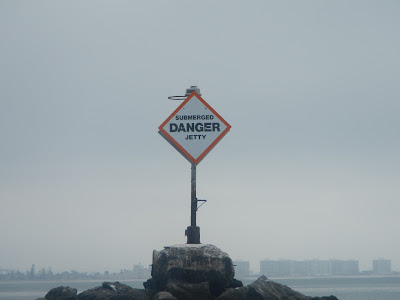 I met Scott at the ramp at 6am and I rigged my beloved 5 weight, 7 and nine weights.  Lined with 150, 250, 350 grains respectively I was ready for war.  Scott wanted to started at some shallow eel grass flats in hopes of landing a monster halibut.  While baitfish busted around the boat all we could mange were a few lizardfish.  Having never fished together Scott didn't know I was fishing a med flex 5 weight and when I connected with my first lizardfish with the rod bent to the cork he thought I was on a monster fish.  He even asked if I need him to get the net.  He laughed pretty hard after I managed to expose the dink fish.  We moved to the wall, now switching to my 9 weight Sage RPLXi and within the first handful of casts I managed my first legitimate fish at SD Bay.  While not the trophy we were hoping for it put a nice bend in my rod and pulled much harder than what its size would indicate.  Scott was fishing a new experimental fly which was basically a deceiver type fly with a worm bass hook.  He was after pigs.  I was using most of the time a fly I got from Calhoun when I borrowed his heavy line rig.  A goby imitation that I don't know the name of, I'll have to ask him the next time I see him.  I tied a boat load of them last night.  I lost count of how many fish we landed it must have been around a dozen or so.  All the fish were around a pound give or take.  No whoppers and no big halibut that Scott was wanting.
I did catch a Calico that was tagged.  That was a first for the both of us.  Having not kept up with happening of our coastal fisheries, there is a lot of controversy regarding whether one should report the information to the biologists.  Fishermen simply don't trust that the information will be used to help fisheries rather be used against them and thereby closing more sections of water.  There is a pretty good article regarding this found here.  I think I have to agree with that author at the end:


For those of you still unsure of whether or not this data will eventually be used by anti-fishing groups to further their campaign against us, all I can say is I'd rather give them actual data to use against us than allow them to manipulate the lack of data by making preposterous and terrifying proclamations about fishery collapse. Those moves helped get the MLPAs established in the first place.

Now lets see if I win that $200 gas gift card.  At current gas prices that will fill up the Land Rover once.  All in all it was a pretty good day despite my lack of sleep.  I now know how Chul must feel like fishing after his third shift work days. 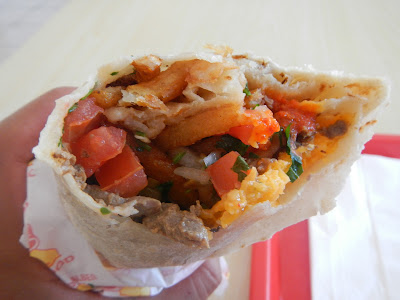 ﻿﻿
Since I was on Rosecrans St.  I decided to hit Adalberto's Mexican Food on the way home and order a California burrito.  I used to come here back in my college days when I visited friends attending the surrounding universities.  While it filled my empty stomach I recall it be much better back in those days. 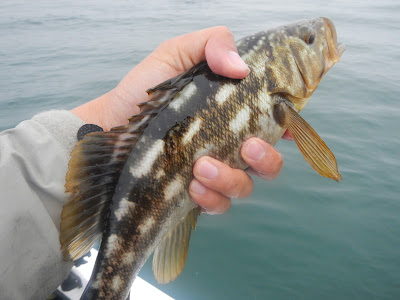 Thanks for the good times Scott.  We'll have to do it again.  There's a hog or two with our name on it.

Posted by gourmetsportsman at 9:36 PM