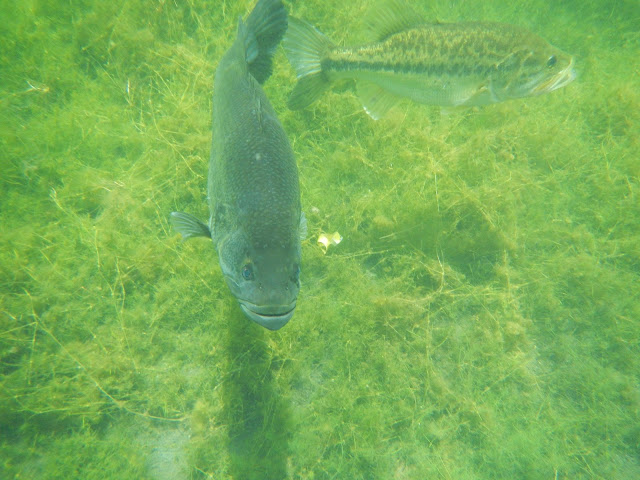 With the skunk still reeking from last Friday's outing, I wanted to get on some fish.  The easiest and cheapest option is to fish my local brown water.  I had called Greg to see if he wanted to fish as I owed him an outing and he was in.  He managed his best outing ever with three to hand and three lost.  I, in the other hand, had one of my worst.   Skunked.  I had one on for a it's initial run but popped off.  I missed several more.  Carp is usually easy for me (at least here) but I'm having a hell of a time getting one this year.  Albeit part of the reason is I'm not fishing the most opportune times or gear.  Greg was fighting his last fish when someone who works for flood control came and told us we couldn't fish here.  I was done for the day and was in no mood to argue with him so Greg landed his fish and we left.  "Ricky Ranger" is so full of shit.  There are no signs stating that fishing is prohibited.  He claimed that DFG (now DFW) regulated them and "natural habitat" so its off limits to fishing.  It's protected.  Who the fuck protects carp?  No one.  Such bullshit.  When I got home Greg emailed me the regs that actually state that you can fish there.  What a piece of shit liar.  I knew he was full of it, I just couldn't prove it until now.  I knew this though:  Interfering with some one who is LEGALLY fishing (or hunting) is illegal.  It is known as the hunter harassment :

Fish and Game Code Section 2009. (a) A person shall not willfully interfere with the participation of any individual in the lawful activity of shooting, hunting, fishing, falconry, or trapping at the location where that activity is taking place.

So if I run into this know-it-all-know-nothing douche again, we'll have words.  And if he thinks he's right I'll challenge him to call the game warden and let DFG sort it out.  I'll then show him the code that permits me fishing there and tell the warden to cite him for harassment along with a complaint to his management.  I've concluded that this is probably his favorite fishing hole, he did claim to be a fisherman, and did want people fishing in "his" hole.  Or he is some guy who is on some power trip and wanted to flex some nonexistent muscle.  Or he is some PETA cock sucker that didn't want us "hurting" wildlife so he made up some cock and bull story about this is a "natural habitat" so no fishing.
Soured I went home showered the nastiness off and headed to MVL to meet Chul and his buddy to see if I could wipe off the double skunk off.  Initially, although Chul invited me to fish with him and his buddy I thought it was probably not a good idea.  But after Ed canceled tomorrow's outing to Irvine Lake due to sickness and the fact the weather was nice I changed my mind.  I called Chul and let him know I'm in. 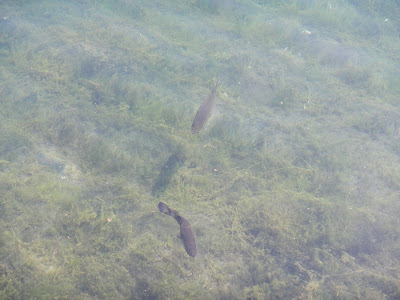 Chul spent most of his time helping his buddy Brett with a drop shot rig as Brett is a neophyte angler.  I fished in front and managed to land two trout sized bass.  At one point we had a hog follow the boat and Brett was desperately trying to place his dropshot in its face. During this time I landed my second bass, which was the smaller of the two, I released him and watched him swim away when all the sudden the hog race out from under our boat and took the bass in on gulp.  I was shocked and asked if they saw that and they all did.  I only wish I got it on film.  It was the highlight of the day.  Everyone managed at least one fish before the lake's "Ricky Ranger" pulled up next to us and cited Brett for casting too close to the docks.  At least he was cited for an actual rule and not a made up one.
Posted by gourmetsportsman at 8:34 PM