It's Official, This Place Does Suck 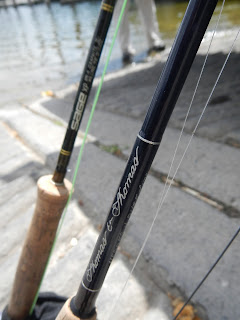 If anyone I know ever asks me "Have you ever fished Puddingstone,"  my response will be "That place can suck my..."  Seriously, I don't think I've ever hated a place more.  Chul and I hit this water one more time despite our last lack luster outing a few weeks ago.  Since Chul managed a bass on topwater and I missed two bass on my last two casts I have wanted some revenge on this lake.  Just like the last time we were harassed by Ricky Rangers that if they did not have a book of regulations their life would have no direction.  I have been on that pram more than half a dozen times when Ed owned it.  Our buddy Kyung has been on it a hundred times when Ed owned it.  Never had we ever been harassed about the decal colors or numbers on the boat, registration or anything like that.  And we've made thousands of drifts directly in front of the Coast Guard station at NHP. Never once did the Coasties who happen to be staring at us give us a hard time and yet the Ricky Rangers on this lake (who have no law enforcement capabilities) give us grief.  Fishing was poor despite seeing several good bass and monster carp.  None were willing to take a fly.  Chul missed a couple and I only had one strike the whole day that I missed.  I did have one eyeball my bluegill pattern a while but refused to even make a charge.  What a waste.  I rearranged my schedule and Chul missed out on sleep for this crap.  Never again.  I don't care if fish are jumping into the boat, I shall not return.
We hit Bruxie Waffle Sandwiches for lunch afterwards and while it was okay it was hardly anything to write home about.  My sister raves about this place and goes to the one near my house every time she visits California.  I really don't know why.  It wasn't bad but hardly impressive.
Posted by gourmetsportsman at 5:00 PM