Nothing To Write About 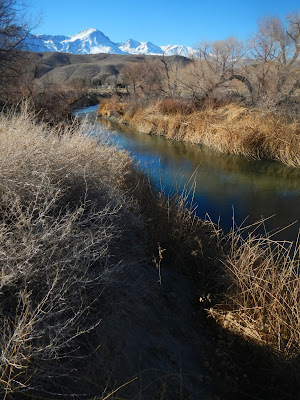 Unseasonably warm weather made today's hunting rather unpleasant.  This is the second year in a row now that a heat wave has hit the ending weeks of the hunting season.  I really hate hunting in heat.  Its not good on me but more importantly on the dog.  Last week I was freezing my nuts off and loving every minute.  That is how waterfowl hunting should be.  Today's high was 66 but in this valley it feels like 88 degrees.  I don't know what it is about this place but it feels hot when its supposed to be cold.

After a rough nights sleep, I awoke and we headed to the pond where on the last trip the canvasbacks continued to return.  When I drove up to it I was disappointed to see that its half frozen with no birds.  The rest of the day was a constant search for birds.  I managed to find a few were all out of range and did not want to be shot.

At the end of day, the old man wanted to hit the Thai Thai again but to our disappointment found that is closed on Mondays.  We headed to another restaurant and were disappointed that we paid more than we did last night for a worse meal.  My chicken pot pie was unimpressive and I have had better versions in the frozen food sections at the market.  Tomorrow, hopefully its better.
Posted by gourmetsportsman at 10:13 PM