These boots are original Meindls made to Meindl's specifications and not the Cabela's labeled Meindls. 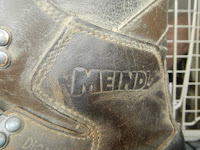 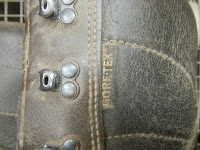 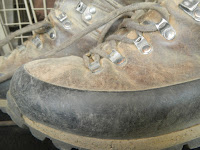 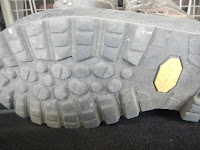 Back on topic, these boots are designed as a high mountain hunting boot.  As such they are 11 inches tall and made with Nubuck leather.  They are comfortable and after more than 3 seasons now I can tell you these boots feel great on the feet.  I have yet to get any blisters even after hunting 3, or 4, and even 5 days in a row wearing the same boot.   These hunts are not flat prairie hunts either, these are high Sierra Mountain chukar, and mountain quail terrains.  These are Gore-Tex lined so hunting in weather is no problem.  The soles are Original Meindl Multigriff® profile by Vibram®  which have provided me great grip on all the various mountainous terrain of California from rocky boulders to scree slopes to the less strenuous terrain and everything in between.

Unlike my Meindl Perfekt, the soles on the Dovre are not stitched but like most modern boots are glued and then reinforced with a high rubber rand.  This was always a concern for me, as on most boots, particularly on cheap export boots, this is a weakness as glue eventually weakens and separates from the boot.  I've seen it happen.  On these German made boots though I've yet to see or read about that happening, although that doesn't mean it won't.  Only time will tell.  I bought these boots in British Columbia a few years ago at AJ Brooks.  They owner had told me that as long as you keep them clean and protect them with cream you should have years of service.  Obviously from the pictures I haven't been keeping these boots clean as I should. 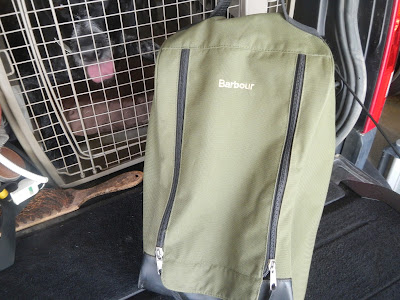 I keep my Dovres in a Barbour boot bag which I had to buy from a store in the UK.  For whatever reason boot bags do not sell in the US and so no one makes them or even imports them here.  I do not know why that is, I absolutely love boot bags since I remove my boots after the hunt.  I find it hard to drive in big boots.﻿
Posted by gourmetsportsman at 7:48 PM