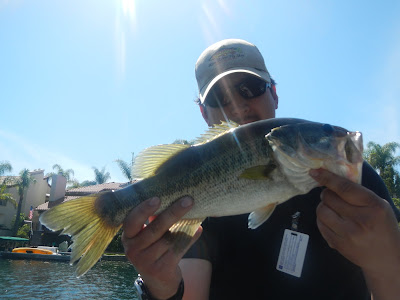 Our four day Sierra trip was somewhat disappointing.  We were hoping for a skwala and march brown hatch that never happened.  Don't get me wrong I enjoyed myself but I was hoping for more.  Chul asked if I wanted to head out for some local fishing  and I told him I'm always game.  We debated where to fish and suggested taking his new pram (which I brokered the sale) out to Alamitos Bay.  After some discussion, Chul suggested MVL.  I was somewhat reluctant since our last outing the lake was green but I agreed and met him at 1PM outside the lake.  I was already aggravated today as I spent the entire morning on the phone with AT&T for mucking up our phone lines and internet service.  I was in no mood for a poor performance on the water which I thought may happen.

I'm hardly ever wrong (yeah right) but I can say I ate a big shit burger today.  MVL was absolutely stellar perhaps one of our best.  Chul was the first to hook up with a 2 pound bass.  After a few casts I was on one about a pound and a half to three quarters.  Never could I break the 2.5 pound mark on largemouth bass until today, kind of.  I danced my fly near a submerged tire and was hooked on a monster bass.  I managed to get it to the boat before shaking off.  While I didn't get a photo of it I did get it on the headcam.  We estimate it to be 4.5 to 5 pounds.  Like always I fished my favorite 5 weight T&T Helix saltwater version and it was bent to the cork. 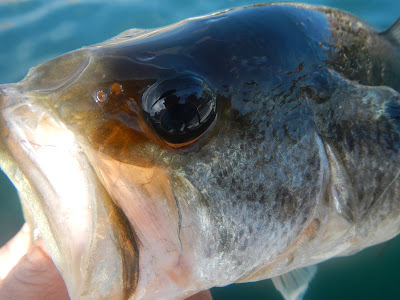 We moved on to couple other coves before hooking up again.  Chul was the first and landed a trout-sized bass that could have been one of the prettiest bass in the lake.  I once asked Ed ,while fishing with him particular lake (Barrett),  if there were crappie in that lake and after I spoke those words he almost instantly landed one.  I asked Chul the same today and told him that story and jokingly said we'll now get a crappie on our next fish.  And guess what he did!  His first crappie on a fly rod in fact.  I told him I'm going to ask that every time I fish for now on.

Off topic now, while in this cove a mother and son were on their floating deck not far from us.  They were close enough that I could hear what they were saying.  She picked up the phone as it rang and I heard her say that her father was dead.  Distraught she yelled out crying.  It was a sad scene but what made it more sad, as I watch this poor woman weep, was that her shitbag-skater-punk-dressed-in-all black kid do absolutely nothing but text on his cell phone.  Nothing.  Nothing to comfort her or put an arm around her.  Nothing.  I wanted to go over there and punch him in the face.  We stayed at that cove long enough to see her eldest son come out and as she wept he at least had the common decency to give her a hug and console her.  What the hell is wrong with kids today!?!  It is no wonder there are so many mass shooting in America.  Kids today have no compassion or even the decency to try and calm their own mother down after tragic news. Back to happier things.  I managed one more bass  of juvenile size like the one Chul caught toward the opening of this cove.  Then we moved across the lake and fished there.  There were boats stacked up in the deeper ends and one after another these spin guys were hooking up on some stocked trout from Nebraska Tailwalkers.  We fished closer in the shallows and drifted down hoping for more bass.  I got a bump and had a fish momentarily.  The next cast or so I got hit again this time I had him on.  It was one of those stockers.  These fish do not quit.  I talked shit on Chul for over a year for wanting to fish these trout and here I am laughing and giddy as this trout swam around the boat.  I can say these stock trout are fun (never taught I'd ever say that).  The fish was full finned and although the photo may not show it was nicely colored.  I'm used to CA DFW hatchery trout that look half dead when you catch them.  Since you are supposed to keep the trout in this lake, I did and according to Chul are great table fare (unlike the DFW ones).  It should be nice in the frying pan. 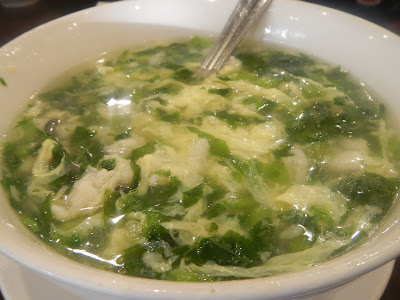 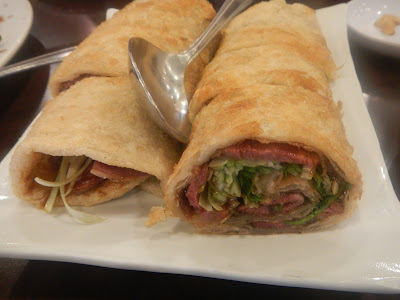 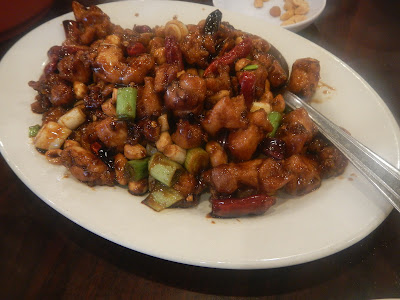 The fishing ended for the most part, not bad for couple hours on the water.  Afterwards we headed northbound for our homes not before stopping for some Chinese food at Chef Chen's in Irvine.  The fish and preserved vegetable soup, Chinese beef roll pancakes and Kung Pao chicken hit the spot and filled our growling stomachs since neither one of us ate anything all day.