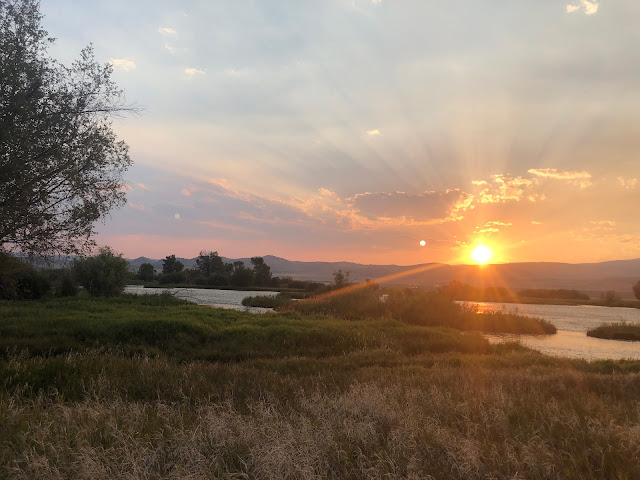 In the morning we packed up to head up to Galloup's shop.  I always enjoy paying a visit there to speak with Kelly and Jeremy for intel and general bsing.  Last year Kelly told us about fishing the Upper Madison below Hebgren and how the best way to cross the river.  Given that we we already exhausted from a week long trip we screwed up and never did find the boulder he was referring to.  This year we wanted to make sure found the spot. 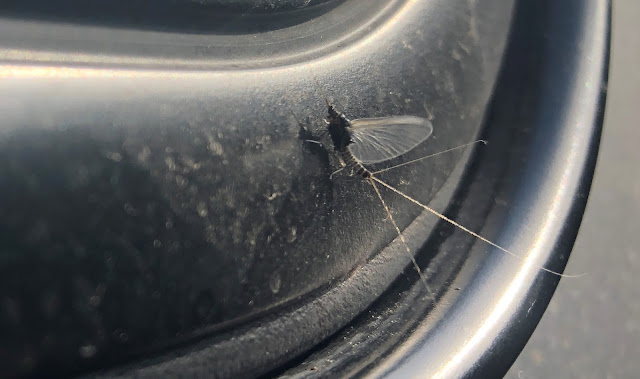 We made it to the parking lot and immediately we noticed the massive amount of baetis flying in the air.  Kelly had let us know before heading up there but I didn't rig a dry fly because I wanted to fish streamer. 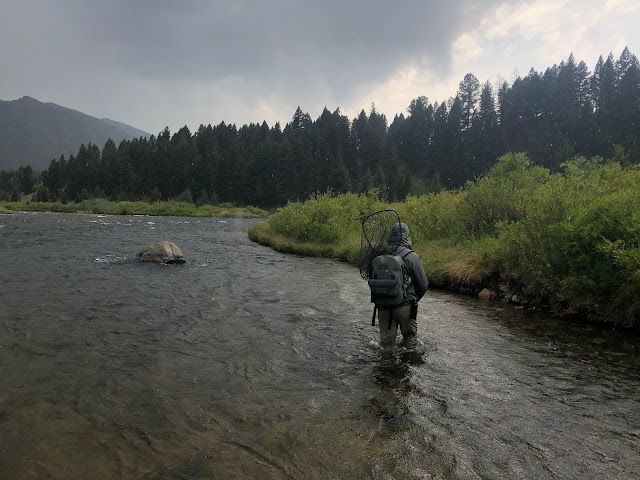 Fishing was hard on streamers and in reality I probably should have fished a dry.  By the afternoon the weather changed and rain began to fall. 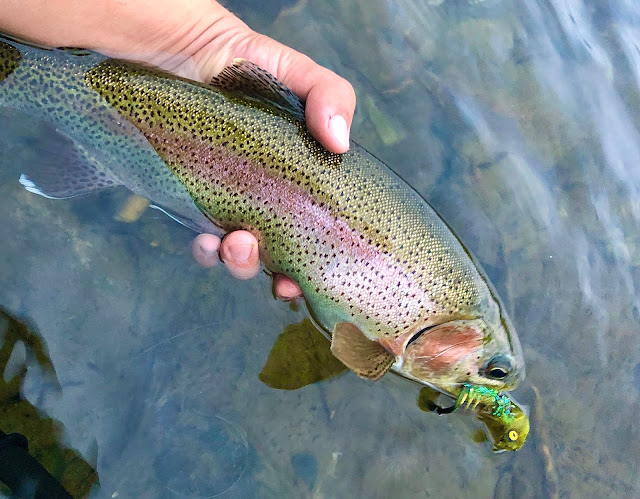 By late afternoon we were beat and went back to the shop to gather more supplies and rent a cabin from Kelly.  There it was time to make a steak dinner with mash potatoes and water spinach that was intended for the night we had three cup chick but I was too lazy to prepare it. 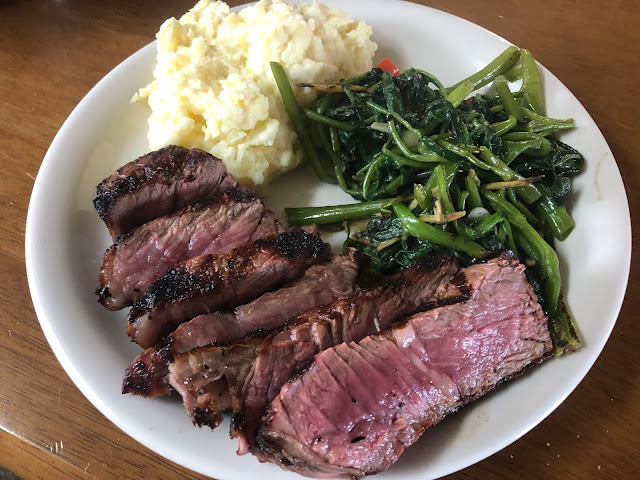 We had dinner on the back porch of the cabin with a view of the valley and Madison.  In the evening we fished three dollar bridge section.  Swapping the streamer for the mouse pattern in an attempt to get my first fish on that fly.  Still no luck but unlike my earlier Colorado trip I didn't even get a blow up this time. 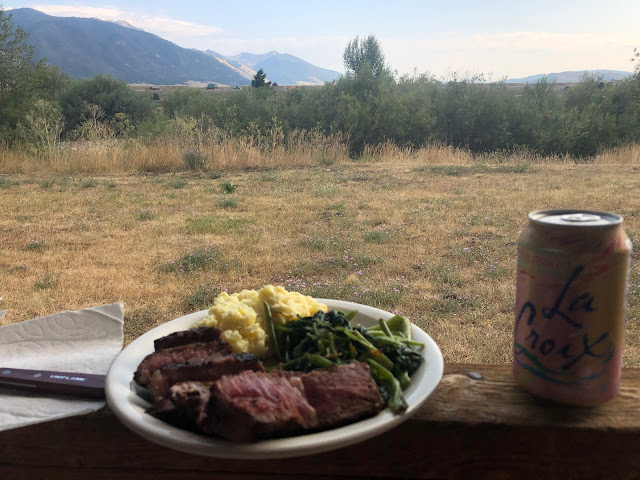 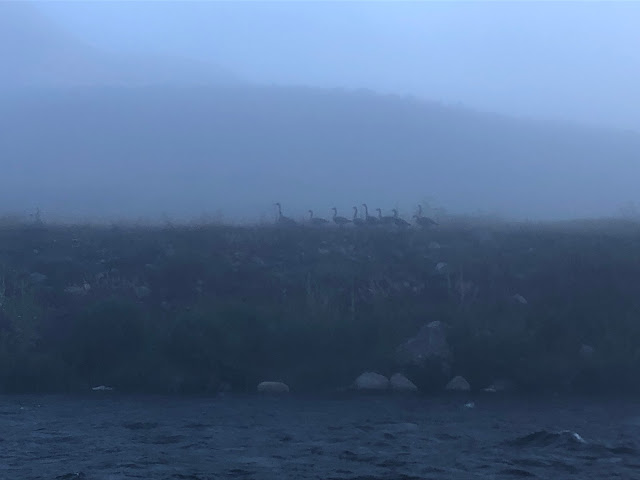 We awoke early before the sunrise to go back up to the same section as yesterday.  Mist filled the air giving an eerie atmosphere. As sun slowly crept we hiked our way downstream to the infamous boulder. This time would cross the river and fish the other side of the bank.  Our target as was the whole trip were large predatory browns hoping they attack our articulated streamers. 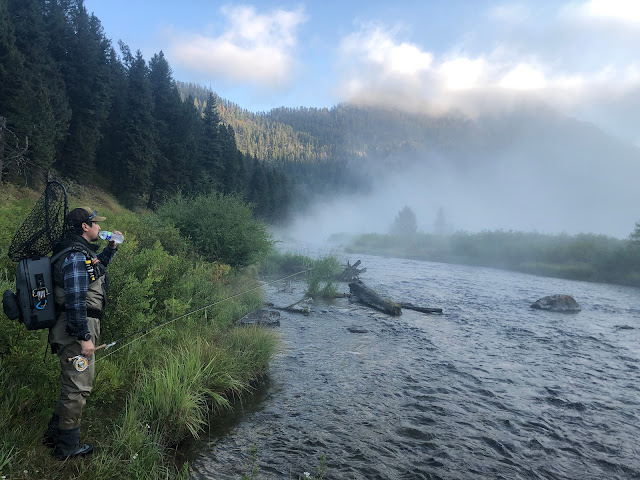 We fished til mid-morning and headed back to the cabin to make some breakfast before we had to check out of the place.  We ate, cleaned up the dishes, checked out and fished the thee dollar bridge section.  We headed downstream on the west side.  I didn't quite like this part of the river, finding it lacked the type of structure I preferred.  Just like every afternoon we switched to dry flies, mostly terrestrial patterns, with mixed results.  Tired and wanting to see something different  we opted to see another part of the river.  The vast number of anglers also prompted that decision. 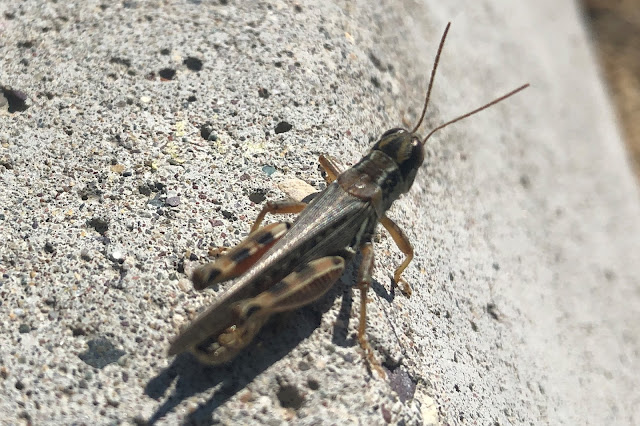 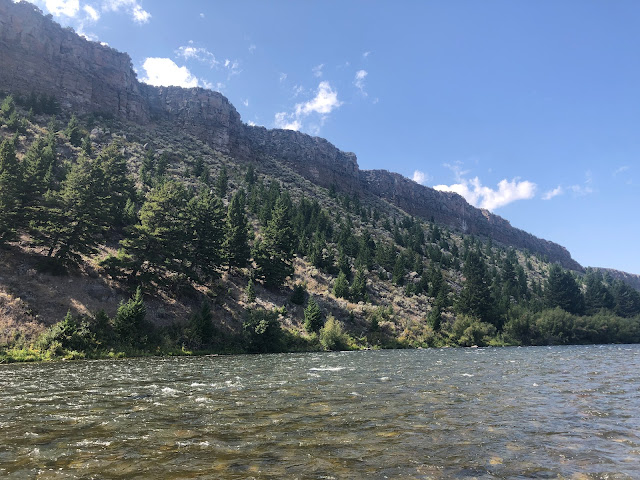 We decided to drive downstream for some exploring and stopped at The Bluffs section.  This area is loaded with drift boats.  It's hard to wade fish here and therefore not productive for us. 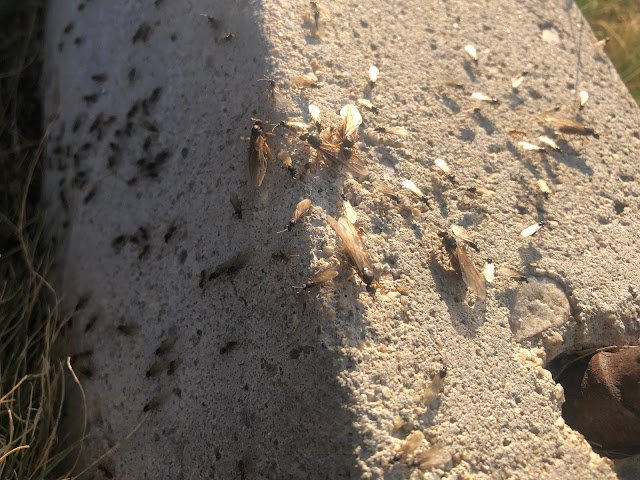 After a couple hours on the water, we'd come back to Reynolds Pass to camp for the night.  I had spoke with another angler who fished upstream and told us it fished awesome that afternoon.  He was fishing a black caddis and "killed" it.  The following day we'd head back to shop and Jeremy told us that there was particular ant hatch (the type of ant I don't recall now).  He did tell us that these ants have some chemical that reacts to the trout and makes them drunk.  So drunk that they'd often miss the fly.  On one trip, Jeremy told me that the fish get so drunk they'd crash into his drift boat. 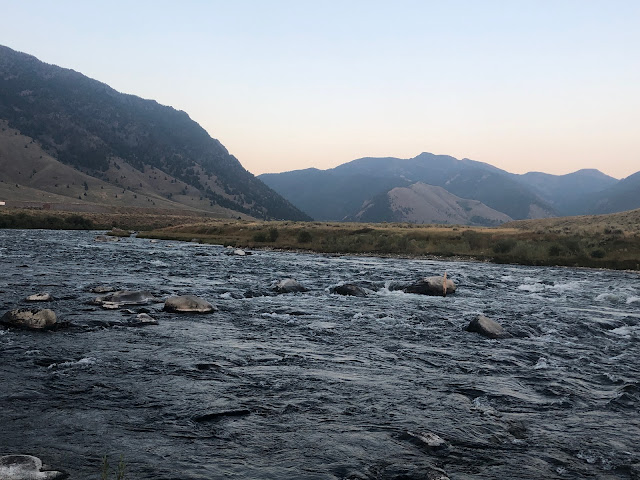 That evening we'd fish below Reynold's Pass.  I'd be throwing my mouse pattern again in an attempt to get one but I couldn't even get one to rise. 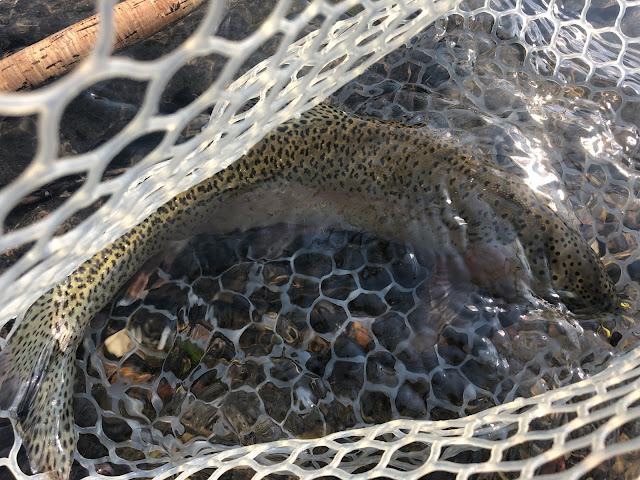 In the morning fished three dollar again with mixed results.  The Upper wasn't fishing quite as well as in the past and with increased pressure due to the increase of visitors due to Covid lockdowns we wanted to fish elsewhere.  So we drove to Ennis to fish The Braids. 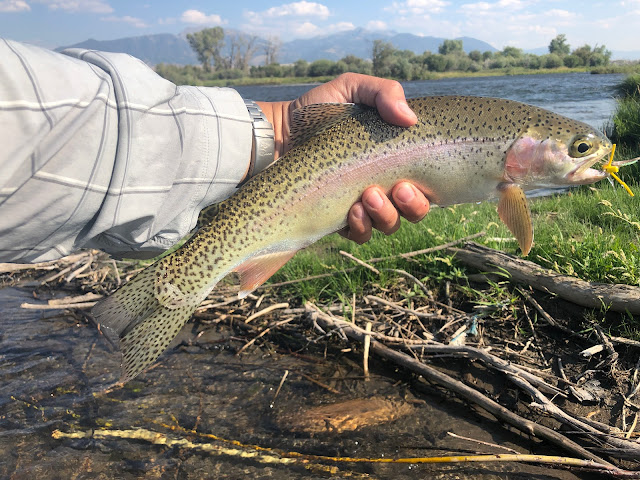 We'd stop at Madison River Fly Company for info. The pro staffer was helpful with not only flies but how to best access the river.  We loaded up with hoppers and went on our way. 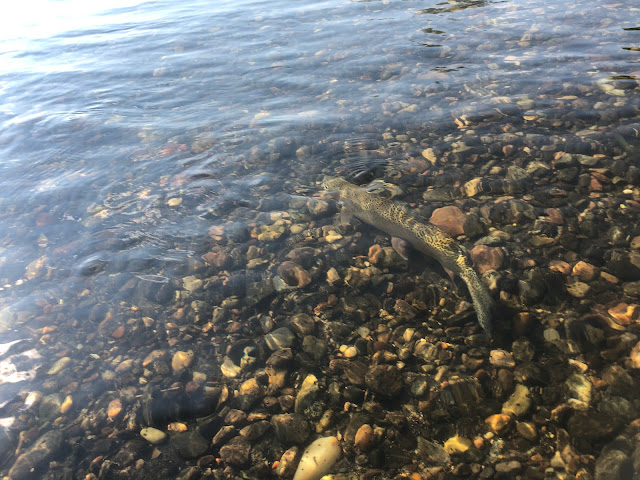 Fishing was hot and cold but if you found a section it was loaded with them and certain stretches would be void of any fish.  Or at least they would be unwilling to take. 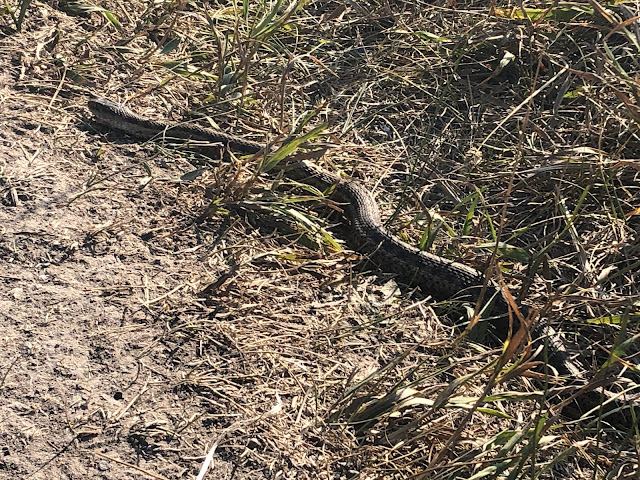 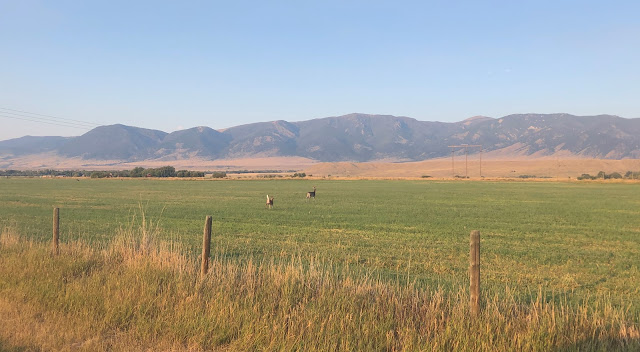 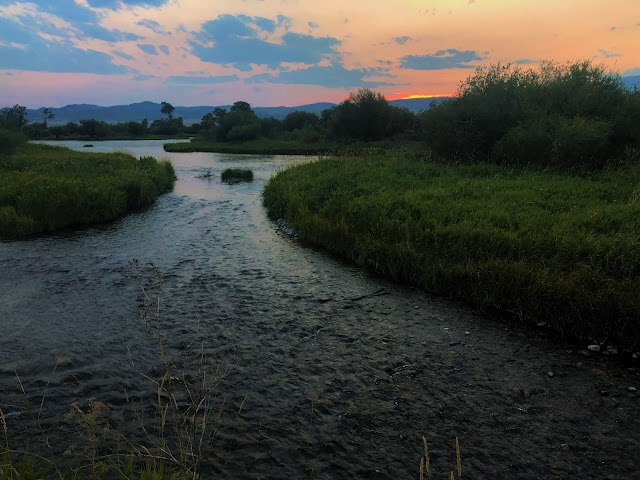 Having fished for few hours we headed into town for dinner.  We needed to fuel up for the evening session.  Unfortunately the pizza was mediocre at best.  We returned to fish the night and it seemed harder than in the afternoon.  Seemed like the bite shut down.  On the way back to truck, we found a pond and we threw mice at the banks in the moonlight.  We managed to get a couple blowups but no hook ups.  We camped right on the water for the night. 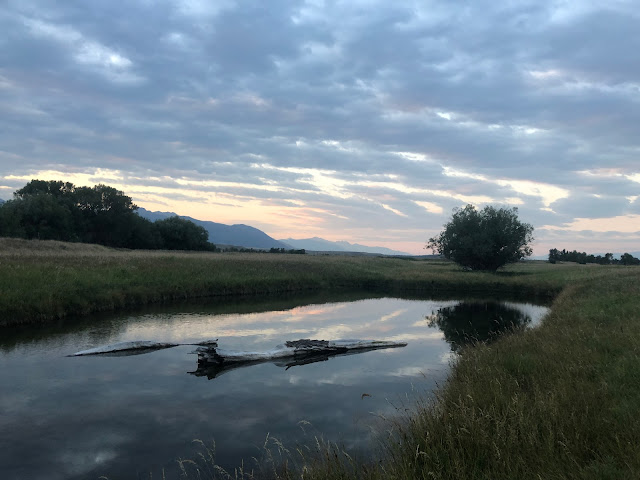 We woke up again before sunrise to try and get those fish we stuck out on the last night.  But this morning they weren't interested in the mouse pattern.  Once the started to poke out we switched to streamers and started fishing downstream.  Once the sun was bright we switched to hoppers but by late morning the blue wings began to hatch.  Instead of completely rerigging for lighter tippet I simply added the BWO as a dropper. 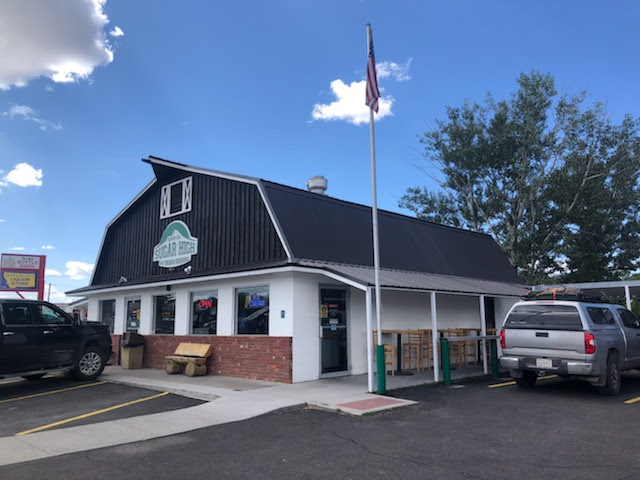 By noon it was time for lunch on recommendation of the fly shop staff we went to Sugar High.  We had told him we intended to eat at the cafe and he told us that their burger was average at best and we should go to Sugar High instead.  I'm glad we asked him because this was the best burger I've had in all the mountain states I had to date.  In fact it was so good we went back again for dinner.  The burger is made with fresh local beef.  The soft serve and huckleberry sauce was also good.  Worth a visit if you're in the mood for a burger in Ennis. 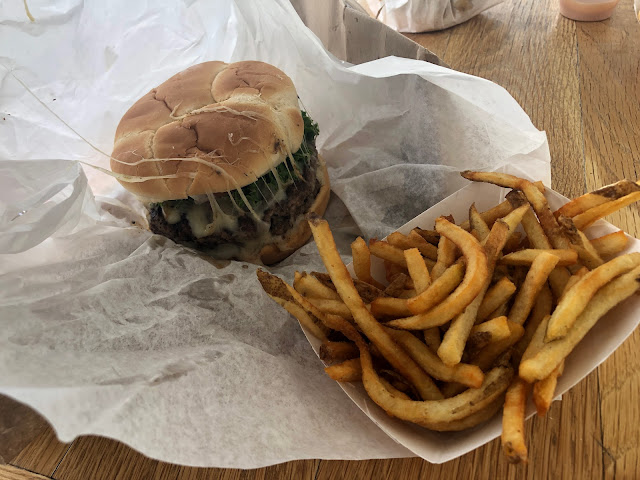 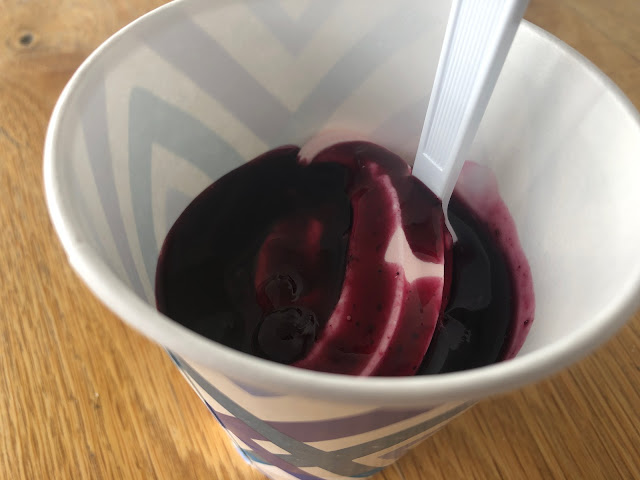 After lunch we fished another section of the Braids we yet to check out.  We'd be fishing hoppers all afternoon with good results.  After dinner we decided to start our way back but instead of staying on the Upper Madison we'd fish Henry's Fork once again.  We made it back to our favorite campsite on the river and while we planned to fish the Box Canyon for the evening we decided to to rest up instead.  We were exhausted by now and we needed all our wits to challenge the Ranch section the next day. 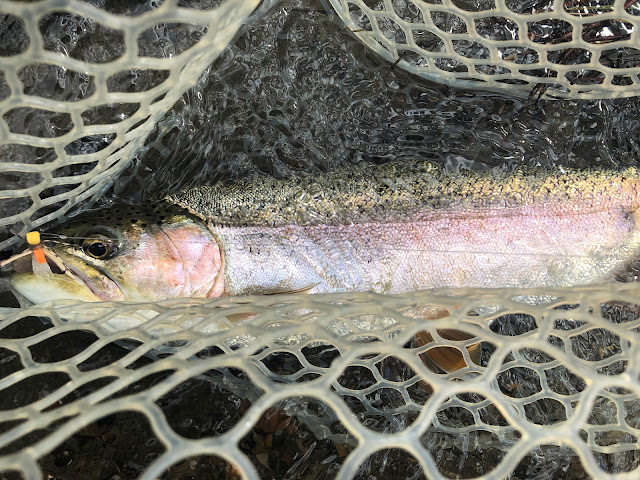 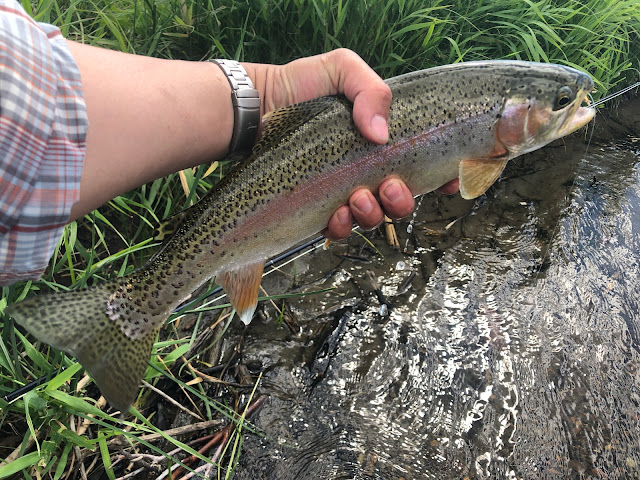 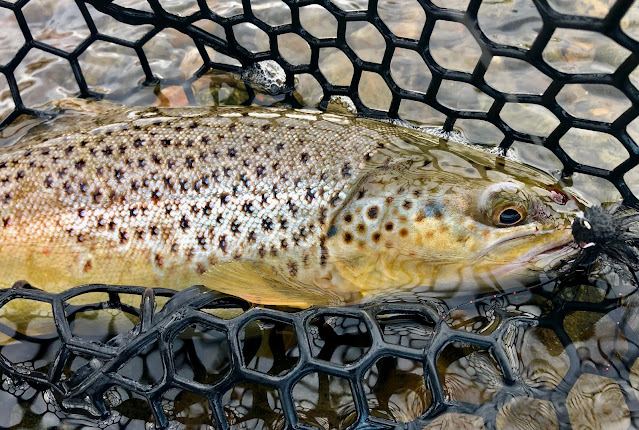 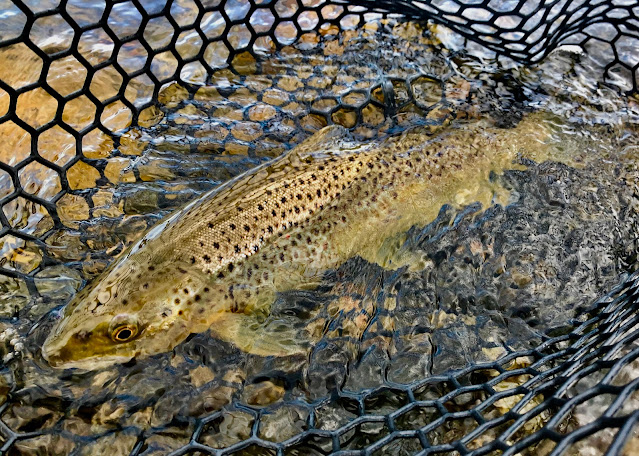 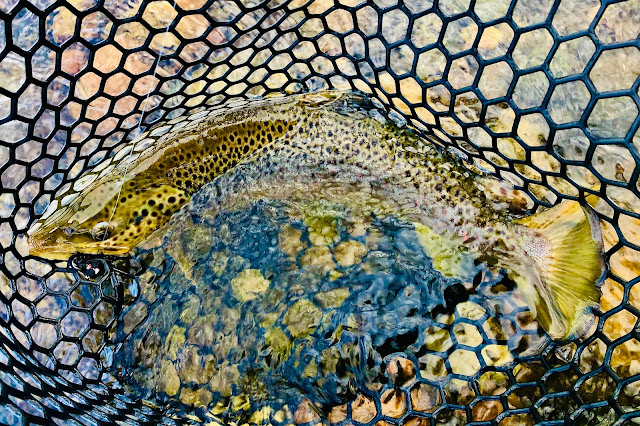 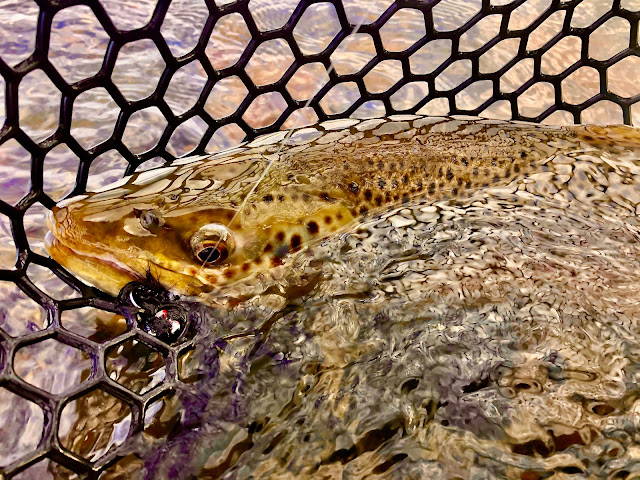 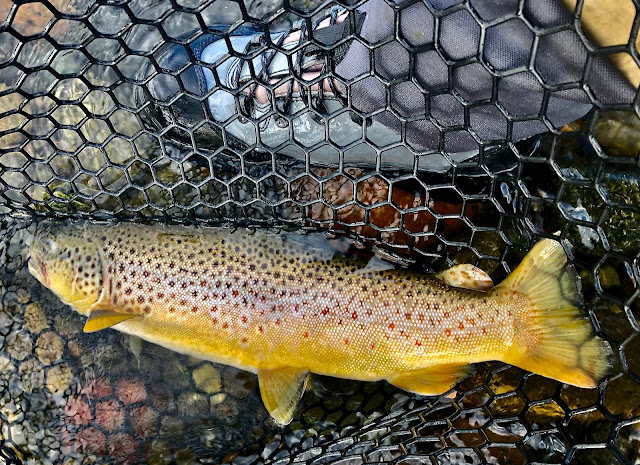