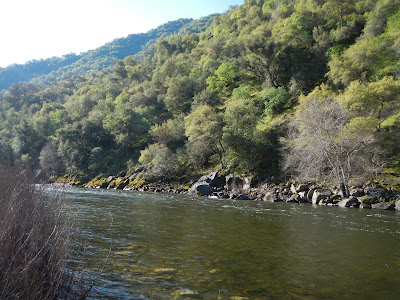 Yesterdays fishing was tough with only a few fish to hand.  When we awoke in the morning we noticed that the water had changed, slightly more off color than the previous day.  We left Erica sleeping in the tent as Chul and I drove around scouting spots.  We managed to find some areas with potential and picked up some dead wood for tonight's campfire.  The river was getting busy as more and more trucks made their way to the river.

After finding a few drop in points we headed back to basecamp to get Erica and get the day started.  We came back with the sun warming the area, noticing that our campsite was directly under a beehive.  Grabbing our rods we headed out to leave those bees alone.

Our first run had a lot of potential with a lot of submerged structure with a long run.  At the head was a fast rapid.  I started toward the head and fished there as Chul and Erica put on their waders.  After several drifts without any results I look behind me and saw that Erica and Chul were on the water fishing and Chul was fighting a fish from a drift that I had no grabs.  He finally landed the fish and later told me it was slightly smaller than the one he landed yesterday.  As no more fish were willing to take our flies we headed to the truck and decided what we wanted to do.  The fishing was difficult and technical.  ﻿﻿﻿
After some discussion we decided to try a tributary nearby to see if the smaller water would prove more forgiving.  Driving on the road of the tributary we could see the potential of this water.  It was much easier for our heads to grasp as it was water we were more accustom to fishing.  We drove as far as we could not seeing one fisherman on the water.  This should have given us a clue.  We stopped at the most convenient drop in point and hiked to the water.

The banks were covered in willows and wading was made difficult with the rapids.  Time passed without a single take and we decided that downstream section looked more promising.  We left for it and found a good place to park and head to the water.  As we fished this stretch Chul managed a bump or two and while making his way to the bank he slipped on some submerged willows.  The rocks here are slick as snot and although this was smaller water it actually was harder wading.  As I moved upstream I slipped backwards, submerging myself from head to toe.  Falling on my ass, I frantically flopped my arms trying to right myself while looking for my dropped rod.  I finally got myself upright and luckily my reel hooked on some willows preventing it from floating downstream.  I got myself to the bank and dumped all my water from my vest.  And squeezed all the water out of my shirt.  Disappointing.﻿
Fueled by anger and frustration I returned to the water with a purpose but without any luck.  Chul and I split up and I moved upstream where I found a hole with excellent promise.  I waded into it as I couldn't cast from the bank as the willows were thick.  I made a few roll cast trying to avoid the thickets.  Tired I mucked up my leader wrapping my split shot it all over my rod.  It was a mess.  Now beyond frustrated I cleared the tangle when Chul finally made his way to me telling me he had no luck.  We looked upstream for a bit until finally throwing in the towel.  The day sucked.  Disappointing.

We returned to basecamp and I changed to my shirt before returning to the water at our camp site.  We decided to fish the hole Erica missed a fish the day before.  Chul made his way up first and I followed.  As I was making my way to the head the riffles, I slipped again and drenched my last dry long sleeve shirt.  I got up and made it to my hole drifted a few times and got hung up on a submerged boulder.  I broke off my two nymphs and split shot.  That was my cue to give up.  I was in no mood to rerig.  Chul missed a nice one before he gave up too.  Disappointing.


I borrowed a shirt from Chul and started dinner.  The meal, Spaghetti with homemade tomato sauce with imported pancetta.  My intention was to make meatballs but since I did not take the Rover so I did not have the Engel refrigerator at my disposal.  So since I only had a cooler I thought it prudent to use a cured meat oppose to ground meats so we wouldn't get sick.  Last thing anyone wants is to have diarrhea in waders.  That would end a good trip pretty fast.  I finished the meal and while tasting I noticed I just made the cardinal sin of Italian cooking, I overcooked the pasta.  I was pissed.  I hate soft pasta, its such a rookie move.  Disappointing.

Chul tried for the first time his Dutch oven.  His contribution was pineapple upside down cake.  Forgetting the butter and sugar, he improvised and used rum and coke to try and create a caramel.  After the required baking time he checked his cake only to find he burnt the fruit to a crisp.  Disappointing.

Posted by gourmetsportsman at 11:31 AM