Day One- West Side Story, March 15 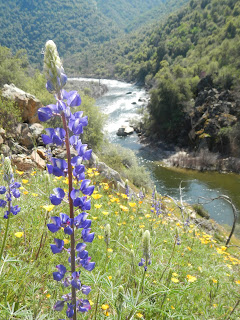 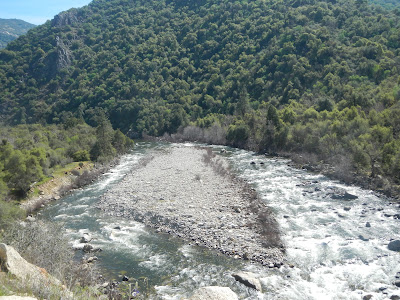 For Chul's birthday celebration, he initially wanted to fish Utah but due to several circumstances that dream died.  Instead he choose to fish here in California and invited some of his buddies along for the ride.  Tuck and Joseph committed early to the trip as did I.  But just days before the trip, Tuck backed out and therefore Joseph was force to bail out as well.

We left Thursday afternoon and packing the bed of Chul's Nissan as if it were a Tetris game.  After stuffing it full we made our way up north.  We managed to avoid all LA traffic and after about six hours we made our way up the windy mountainous road that made me feel car sick.  After a long tiring drive we made it to our planned campsite only to find it already occupied.  So we backtracked to find another.  We unpacked the truck and made camp next to the river.

In the morning we awoke and we finally got our first look at the river.  This was my first visit to the western side of the Sierras and it's big water.  I haven't spent too much time fishing them.  We began fishing around camp.  The moment I stepped into the water, even though the water was low for the river, I knew wading some of the areas was going to be more difficult than what I'm used to on the eastern side.  We fished this area for a while and Erica managed to lose a fish at the head of the a fast seam.  We decided to drive up to the trail head and hike in to see what the river looks like up there. 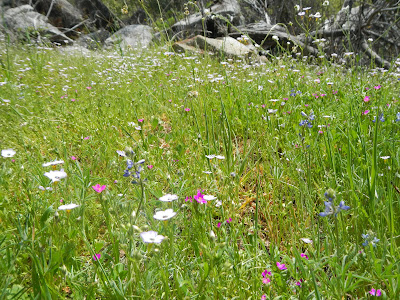 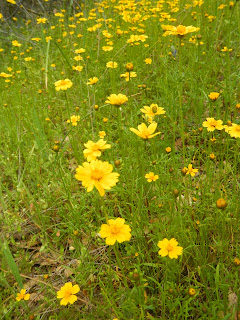 The canyon was at full bloom.  The wildflowers littered the mountainside.  It was quite a sight and made fishing in such an area something special considering I spent most of my time in the eastern side its quite a change of pace.  Hiking in about a mile we made our way to our first fishing hole.  Within about fifteen minutes Chul was on fish and after a quick fight he was able to net it.  This wild fighting fish refused to stay in hand long enough for a photo.  I managed a strike only to pop off after a few head shakes.

When the fish refused anymore drifts we move up trail to find more willing fish.  Like all big water rivers, it can be somewhat intimidating.  There was a lot of fast white water runs.  Heavily weighted flies and split shot was in order.  When we made it to a certain stretch we crossed the river onto an island and once I reached it I saw some fish rising.  Considering the speed of the water and an increased risk of slipping I only carried one rod and left my dry fly rod at camp so I had to rip off all my nymphs, split shot, and indicator.  Noticing the fish were coming up on small BWO I tied on a size 18 grey compara-dun.  After a few drifts I managed a nice healthy 11 inch rainbow that somehow got around me and flew down a small rapid.  Fearing that he'd come off I stripped him back toward me and was able to land him to hand.  After a few more drifts I managed a few dinks before the hole shut down although the hatch was continuing.  We made our way back to camp but stopped at the hole where Chul managed a fish earlier before heading back to camp. 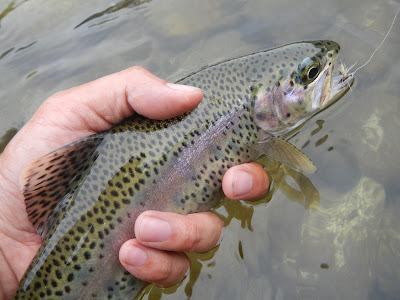 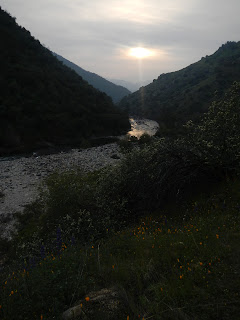 With the sun setting I set up my camp kitchen and revived my role as camp chef.  It's been a while since I've cooked outdoors so I was a little rusty.  The night's menu:  grilled USDA Prime New York Strip marinated in fresh garlic, rosemary and thyme, homemade mash potatoes and grilled asparagus all topped with fleur de sel.  I overcooked the meat to medium as I prefer to have my steaks rare to medium rare.﻿ 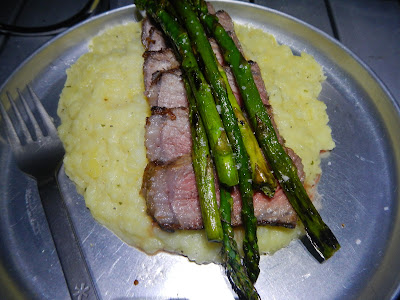 The night was spent with the typical campfire conversations ranging from the humorous to the crude.  Of course we spent a good time of it, making fun of Tuck for not making this trip.
Day 2 to follow...﻿
Posted by gourmetsportsman at 2:55 PM