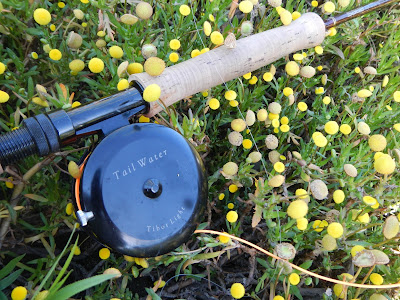 I keep losing good fish!  What the hell is going on?  This afternoon, bored out of my mind I decided to see how my local brown water was fishing.  The water has lowered somewhat but is still off colored more so than I'd like it.  Today I stacked the odds against me.  First I don't like fishing the afternoon since the winds create too much ripples and so its hard to sight fish.  Second I fished my Sage TCR 6 weight that is lined with a warmwater bass line.  Way over powered for delicate presentations.  Not to mention its orange.  Bright orange.  Third since I was way too lazy to change the existing tippet, that leader on the line was probably a year old if not more since I don't fish the 6 weight that often. 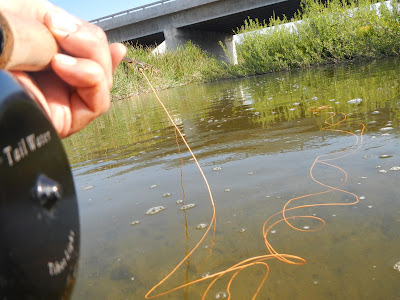 I spent most of my time trying to find fish.  When I was about give up I decided to hit up an area I've neglected for a while.  How things have changed.  The islands and tulies have been moved and so it channelizes the water.  It's gin clear, it almost seems as if you're on an English chalk stream.  That is if chalk streams smelt like ass, were loud with traffic noises, devoid of any clean water fish and had water that would make you sterile.  Other than that, yeah, very similar to a English chalk stream.  There were at least 15 large carp in here.  Casting was tough so I moved away from it and approached them from downstream. I had to wade and that didn't help my cause.  They spooked after several casts.  So I moved up and started blind casting into the weeds.  My rod went heavy and at first I thought it to be garbage until I lifted the beast out of the water and exposed its side.  It was at least a 2 pound bass, a pig for this water.  He never fought, he was limp as a Dirk Diggler and just as big.  He got off somehow after I exposed his side.  This month I've been losing way too many good fish...

Posted by gourmetsportsman at 7:13 PM