For some, the fishing gods look down upon them and make sure they have a good time.  While for
others, like me, they just give them the middle finger.

Its been years since my glory days fly fishing Newport Bay every other weekend during summer with my bud Yosh.  I think the last time I was here was at least six or seven years ago.  With all that experience here, I know how to fish it and where are all the good waters.  So I knew when my friend Koji from Japan wanted to get his first calico bass, I was pretty confident I could oblige his request.

With all the bashing I do about technology, there are the occasional perks about it.  For one I "meet" a lot of people with common interests around the world that I would otherwise never speak with if it weren't for the internet.  Koji is one example.  For the last two years or so, I have been in email communication with him as I had planned on going back to Japan to finally fish for their glorious native trout and Suzuki seabass.  Unfortunately with a weak dollar and a recession my plans never came to fruition.  Not long ago though Koji let me know that he will be in my neck of the woods on business and if I could show him some of our local fisheries.  I was more than happy to oblige. 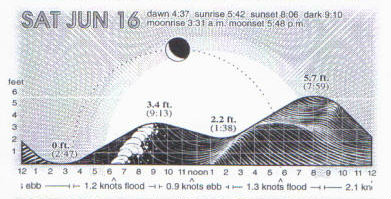 Today we were in search for first calico bass.  All forms of bass, calico, spotted bay, and sand, are present in the bay with calico being probably the least common of the three.   Once we boarded our skiff rental, I directed us to the mouth.  I have read reports that mackerel have been hanging out at the bait barge, so I figured we start there.  Macs are great sport on light tackle and i figured it would be a great start to get the skunk off the boat early.  Also since bass are frequently caught there, it made good sense.  I was a bit worried on how well the fishing would be as the tides weren't as good as I normally prefer but in this case we didn't have the option of changing days. 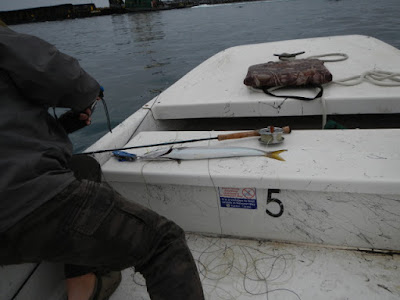 Not long I got my first hook up.  It was a strong fish and pulled line like mad.  I managed to spot it long enough to at least see its size.  Initially I thought it was a huge mac and then it suddenly came loose.  The tippet snapped.  I was pissed.  Not long afterwards Koji was on with a rather angry fish.  Once he landed it, we noticed it was a barracuda.  At that moment the fish I lost must have been a cuda and its teeth seared the leader.   In no time Koji was on a dink halibut.   It was not long after that that Koji finally hooked and landed his desired quarry, the calico bass.  Although small it was still a calico.  Now that I got him on his desired fish I wanted to get him the other bass species.  The next fish he managed was a spotted bay bass.  The already weak tide was beginning to peak when I decided it was time to move.   We moved to a section with deep canyon beneath us.  Within the first drift Koji managed a good spottie.  It looked about 2 pounds before the fish came unglued just near the boat. 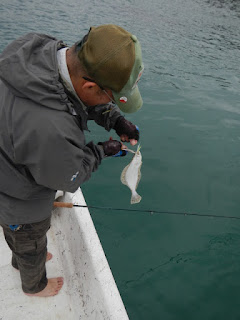 I told Koji about the time I misjudged my cast and double hauled my clouser directly into the window of a docked Sheriff Harbor Patrol boat creating a huge smack noise that seemed to be amplified by my fear and embarrassment,  Thankfully no damage was done to the window and doubly thankfully that no Sheriff deputies were outside at the time.  This gave Koji and great laugh and with the fishing slowed I moved us to an area of moored boats that I've had great success in the past.  It took some time but managed to complete the salt water bass grand slam with his sand bass.  We moved to other waters and I showed Koji Terrible Herbst's home.  I wanted to fish the many great sections past the PCH bridge but while fishing near the floating seafood market, one of the workers let me know that everything past the bridge has now been closed to fishing by order of the MLPA.  Great, I thought.  She apologized and defended our rights to fish.  There was no reason to apologize and I thanked her for letting us know, the last thing I need is to be cited.

We fished areas without much success. Koji suggested that we go back to the barge and I agreed.  With only about 45 minutes until the boat was due, I fished like made to fend off the skunk.  Since becoming knowledgeable of this water, I have yet to be skunked.  Today was not going to be the first.  The tide shifted slightly and that was a good sign.  I missed several short strikes while Koji continued to catch fish here and there.  Finally I managed a solid bite.  I rushed it in and finally landed a dink calico that saved me from the skunk.  Why did the fishing gods curse me?  At least Koji didn't come 5,478 miles for nothing.  I, at least, accomplished my primary mission- get Koji his fish.  While none were of any substantial size, with the expection of the one that got away, at least he didn't get skunked.  We left and returned our boat to get some lunch and then head off to Bob Marriott's so Koji could get some vastly cheaper fly fishing supplies compared to Japan.  Tomorrow we are off to the mountains and maybe since I fished so poorly maybe that means I get a huge local monster trout for my patience.

Posted by gourmetsportsman at 9:51 PM