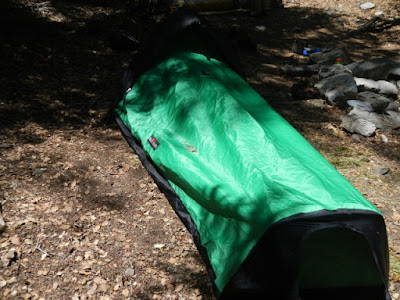 Sleeping in a bivy sucks.  Being partially claustrophobic doesn't help any either.  Add to that a slightly angled floor and you have a recipe for a rather sleepless night.  Throughout the night I woke up every few hours.    I choose to take the bivy to save weight and since it was going to be only one night I would just put up with the hassle. 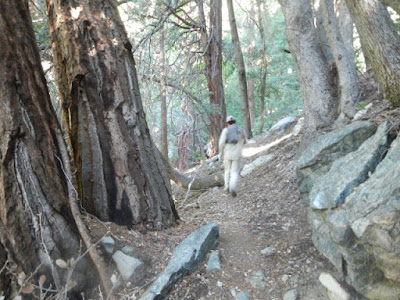 According to The Weather Channel the nightly temps were to be in the mid 50s.  While it was probably that warm around midnight, it was much cooler once the night progressed.  Chul had just brought a silk sack liner to save weight, and before I was envious since I had brought my Marmot down bag.  I had thought about buying just a silk sack before the trip and decided against it, I'm glad I did.  We woke just before 6am to a very brisk morning and made breakfast.  I found some just add instant chili soup in its own cup at Ralph's and had that for breakfast.  It was not good.  Its funny, in the wild food always taste better.  It must be the fresh air and maybe your sense are then heightened.  But if food doesn't taste good out there then it must be really crappy.  I managed to make it somewhat edible by putting in some Italian rosemary flat bread I had picked up at the Claro's Italian market when I picked up the salami.  They had cup-o-noodles and some random food as well.  I think both our meals sucked.  After our meal, I headed down to the water to fill every one's canteens.  I took my fly rod with me.  I casted to the pool Chul had landed his 14 incher and caught a 6-7 incher on the first cast.  No other fish wanted to take.  So I began filtering the water when they came down and asked if I wanted to start fishing or hike the trail to move upstream.  We chose to take the trail. 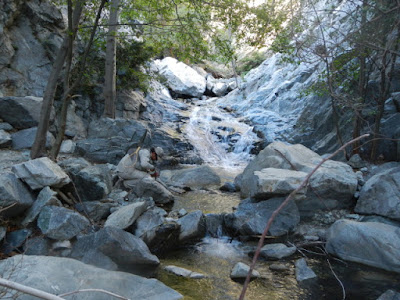 The goal was to reach the confluence, once we reached it we took the tributary to the right.  We fished the first few pools without a single take.  We moved on and found the area had been beat up pretty good.  Trees, limbs were fallen all over and the water was low.  After hiking no more than a quarter mile we decided to head out and hit the other water.    This side looked much better.  There were several pools along the way, many of them deep and holding several fish.  I was hooking on to a lot of dinks cast after cast.  It was like fishing the West Fork were each pool would produce 20 or more dinks.  After seeing Erica not catching any fish in a big pool.  I gave her mine and told her she'll get a bunch of dinks out of there.  And she did.    Chul was on a pool up ahead and I saw him land a good fish in the 9-10 inch range.  He gave me that hole and just like the one I gave Erica this one kept producing nonstop dinks, so I gave it to Erica and it continued to produce for her.  I continued upstream to a beautiful huge deep hole that I lost a killer fish when my knot slipped.By this time Chul and Erica had made it to this hole and the whole had a enough room for all of us to cast.  On Erika's first cast she manage a quality fish.  I told her if it has my fly in its mouth I want it back.  But it wasn't the same fish.  I really wanted that fly back, a Skwala stonefly pattern since I only had one. 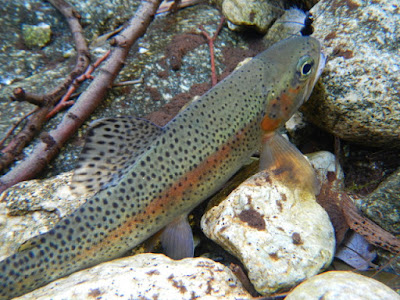 We continued to move on catching fish along the way.  Erika was working a pool with two large fish.  Chul and I were trying to spot for her but none of the two wanted to take.  I left them and reached the huge waterfall with a huge plunge pool beneath it.  I called Chul to get his ass up here and I managed a solid 10-11 incher on my foam ant.  I caught several more in that range here.  Chul had spotted a monster, probably 16 inches in there and missed him when it struck his fly.  He did manage some fish out of here before the pool died.  After that he tied on a streamer nymph and I decided to get crazy and tie a mini mouse pattern to try and entice that beast to take.  No such luck.  We decided to take lunch there and let the poole reset.  I sat eating my rosemary flat bread and salami on a huge boulder overlooking the pool.  In time the fish began rising again as a small BWO was going on.  I told Chul and I retied a size 10 Monkey Bum emerger I read about in a old issue of FlyLife I have on the coffee table the other day.  A fish took, a good one, but not likely the one Chul had chase his fly.   It was JUST another 11 incher.  Man, we are getting spoiled lately if a 11 incher is JUST a fish.   On most of our local watersheds most people would give their left nut for a 11 incher.  The beast would not take again this day so we moved back out of this section of water as it dead end here. 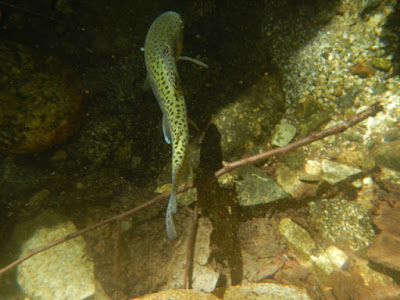 We continued to fishing but at least for me the fishing slowed considerably.  It may have been due to the fact we were moving downstream now and the fish were spotting us or that the heat was picking up and the fish were hunkering down in the shadows and undercuts.  Who knows.  The takes that did happen were soft sips and if you were too fast or too slow to set the hook you'd miss the fish.  We were making our way back to camp and I missed several good fish including one that Chul has missed on every visit here.  We reached the pool that had the 14 incher and I casted my fly in there again.  I had a very good fish chase only to look away once it swam near.  Chul though that may have been the pig he landed yesterday.  He wouldn't show his face again.   So I moved on to other pool that I caught the solid fish yesterday.  The dinks were aggressive in this pool but most were too small to hook onto my size 10 fly.  I finally managed to get one on, it was a good his but not the same one I landed yesterday.  But nonetheless it was a good fish to end the day with.  I moved down where Erika was working a small pool that she and Chul saw a 14 incher.  the fish would  not take even though it would show himself from time to time.  Erika named him Fred and we decided to load up on water before heading out. 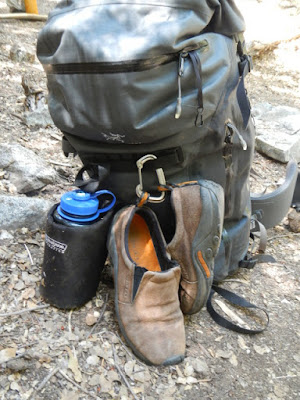 ﻿﻿We had packed most of our gear in the morning, all but our tents.  So we started to breakdown those and pack out.  While it did not bother me so much while fishing, my blister was going to be bothersome on the trail.  I put a fresh piece of moleskin and took a large gauze pad and folded it over and tape it to my heel.  That proved to do the trick.  I was no bothered my it for the entire hike our of there.  It's surprising how much better one can move when their feet don't hurt.  The hike out was a breeze as its mostly down hill and the weather though warm was not nearly as hot.  We found out that its not necessary to camp out here since the fishing ends at the waterfall but it was nice to spend the evening with friends under the stars.  It was also nice to finally use my new Arc'Teryx backpack which proved, unlike my last Arc'Teryx pack, to be a keeper.  I write this itching all over as the bugs were relentlessly feasting on my flesh.  Damn bastards.
Posted by gourmetsportsman at 11:30 PM