The Other Side- Welcome to Hell 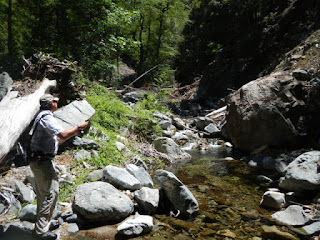 Lately we’ve been spoiled.  Typically most people don’t complain about catching 100 fish but when you’re told by a DFG biologist that there are a lot “big” fish up to 14 inches up the stream and you don't get any, well...From what I've heard these biologists don't bullshit and are a pretty reliable source.  But after a few hours of fishing Chul and I were scratching our heads.  While we were able to catch some fish up to 11 inches and some maybe pushing 12 we were still waiting to see one of those local lunkers.  Chul did manage to spook one of those pigs in a small pool covered with crisscrossing fallen logs, making it impossible even if it weren’t spooked to throw a fly at or even land. 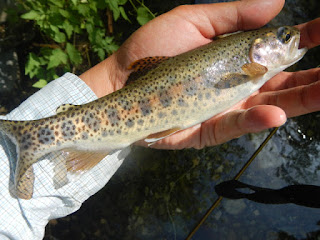 A while ago Chul fished this water and managed a few fish up to 10 inchers.  Once he was told there were larger fish upstream he was eager to return.  With high expectations, he made his return today bringing me along.  Without getting into his personal life, Chul had a rough week and needing some respite from it, we fished, unfortunately his bad luck seemed to follow him here to the stream.  The lower portion typical of SoCal streams was crowded with a combination of swimmers, spin fishermen, knuckleheads, and the like.  So we hiked past them bypassing some rather promising looking large pools.  We began fishing once we felt we weren’t going to be disturbed by others.


After a few hours of mostly dinks, I began thinking to myself maybe I should have just stayed home and watched Euro 2012 and one of my favorite teams, .  The trout here are easy to catch and they are plentiful but not really big.  There are pods of rainbows in very pocket water and small pools.  They are aggressive like most of our local fish and will take any dry fly that you present to them no matter how sloppy.  We hiked upstream finally finding a deep huge pool.  At this point we had not seen any fish bigger than 9 inches and we thought if there is a 14 incher it would be in there.  I missed a strike and Chul’s fish came loose.  Surprisingly the hole was a dud.  All the fish in there we could see were small.  We decided to move on upstream I took the shallower side of the pool and moved on.  Chul decided to take the dry route and climbed up to the bank covered in ivy.   Ahead of him, I heard a ruckus behind me and turned my head back only to see Chul belly flop into the deep pool.  I thought he slipped but the angle he took into the water didn’t look like it.  I asked if he were okay and he said he was just face to face with a rattler.  Knowing he was fine I started laughing and Chul now soaking wet could only giggle and follow my route upstream.  Being soaked from head to toe would later prove to be more of a headache later.


We continued to fish catching fish along the way and around noon we started get hungry so Chul found an spot near the rock face of the mountain to break for mealtime.  I noticed he had a concerned look on his face while looking around near all the small caves and caverns in the side of the mountain.  I asked him what’s up.  He was worried that this was a perfect rattlesnake habitat and then we noticed a den full of eggs.  “Let's get the fuck out of here, let’s find another place for lunch, " I said.   We found a shaded area near the stream away from any danger. 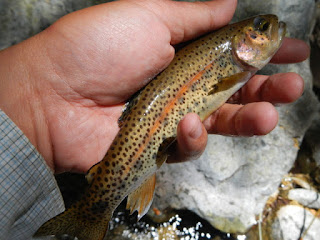 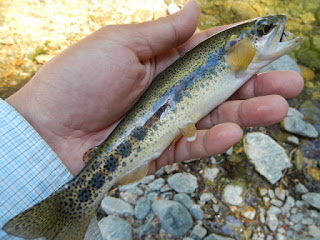 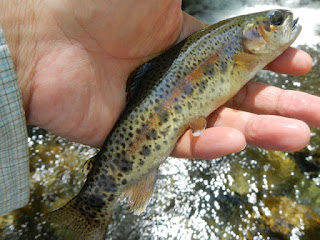 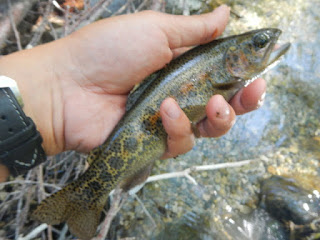 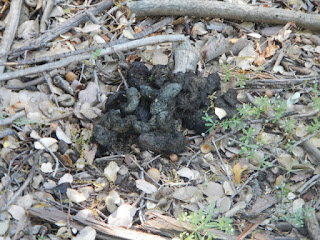 After eating in a snake free area we began fishing again.  The fish were starting to get bigger but none reaching the sizes we were hoping for.  I'm always impressed with the beauty of our local fish.  Some even have a golden trout look to them, while others are extremely dark and some in between.  It was 3:30 when we made the plan to fish until 4 before heading back.  When 4pm arrived we said screw it and continued to fish moving onward, still curious whether there really is a 14 inchers in here.  We continued and Chul spooked the only 14incher we saw.  We continued to fish until the stream basically turned into a trickle and started to head back.  I saw what appeared to be a trail and took the dry route.  We soon noticed that it was a littered with huge bear scat and that’s when we noticed its track.  This guy was huge.  We were in his living room and got the hell out of there and back into the water.  There was no trail so we had to hike down the whole way via the stream.  It was slow and agonizing trying to get out of there.  We were beat, beaten up and it appeared that we were wading in a loop.  It seemed like every bend, every, straightaway, every fallen log looked the same.  It was never ending.  It took us 2.5 hours to get off that mountain.


When we were finally in eye sight of the parking lot, our spirits began to rise; we were ready to get the hell out of there.  Once we reached the truck Chul hit the button one his car alarm.  Nothing.  Oh great.  Typical.  I told him, at least with my brother’s car, if you just use the key to open the door it will turn off the alarm.  Well Chul’s Nissan is not like my brother .  Once he unlocked the truck and opened the door the alarm blazed.  We took the key alarm apart and tried to dry the internals all the while the alarm is echoing the canyon.  We were there in the parking lot for at least 45 minutes until Chul was able to MacGuyver the alarm by scraping some corrosion off the diode.  Thank god.  We got the hell out of there, promising never to return.  We laughed at all of the misfortune Chul has had lately.   At least he can laugh at it, I guess that is all you can do without going insane. 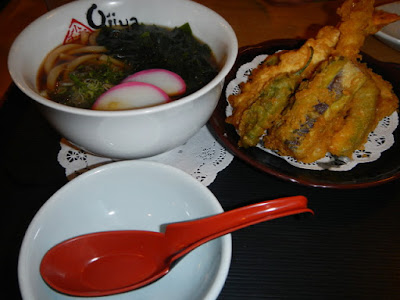 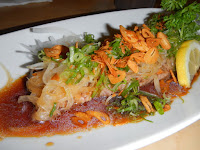 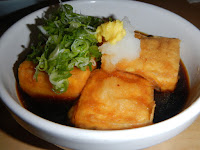 We made it back to Chul’s house beaten and bruised then after picking up his spare alarm key we had a late dinner at Oijima.  The food was great but we were so hungry and tired that anything would have taste good.  We started with fried tofu and beef sashimi.  Chul had katsu curry and I tempura udon.
Posted by gourmetsportsman at 11:30 PM