It's True, Local Giants Do Exists. Catching Them Though...

After visiting the Orvis shop to use our $25 off coupon, Chul and I hit one of our favorite local water.  The last time Chul stopped by he saw a pair of gigantic trout at least 18 inches in a pool.  While he was unable to connect with any of them, we returned today to see if we could tag team them using a spotter above to direct the attack.

Our plan was to fish known pools that held the big fish and skip all the pocket water and pools that we've only caught dinks or average fish in.  While driving up the mountain I saw a helicopter fly out of the canyon eye level with us.  I couldn't believe it and told Chul who was driving.  Once we arrived at the parking lot it was filled with paramedics, fire engines and US Forestry Search and Rescue.  I spoke with a group of hikers that saw what happened.  Apparently some gal fell 40 feet while try to dive into one of the deep pools.  She gashed her forehead pretty good among other injuries.  They told me the scariest part was no one there had a clue what to do.  Luckily there was student nurse that was able to get a hold of the situation before help could arrive.

We left the drama and headed to the trail.  After the first bend, Chul realized that he left his wallet in the truck and may have kept the truck unlocked.  So I took his fly rod and he went back while I went toward the the water to fish the first pool to wait for him.  I caught several dinks while I waited.  Chul finally arrived and I handed him his new Sage Z-Axis. 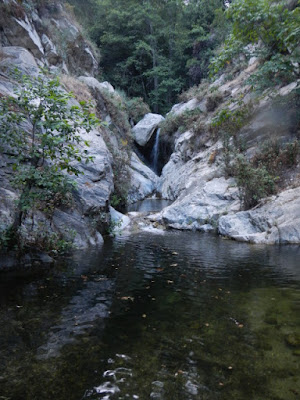 We reached the pool that held the pair of giants and looked for them from above.  We found them circling in a section of the pool.  Even elevated twenty feet these monster looked huge.  Once Chul met a fellow fly fisherman that told him that he managed an 18 inch brown here, I initially thought that guy is full of shit.  Now I know better.  Before I went down, we broke down the pool into sections A-D so that I knew where the cast. Chul would stay put and spot me telling me which section to cast.  I made it through the ivy before hearing some rustling and seeing a tail.  Was this another rattlesnake encounter?  I wasn't going to find out and took a roundabout method to the pool.  Once I reached the water I could barely hear him with the moving water.  I casted where he told me and I over lined the fish and it spooked.  The pool proved dead after that.


We hiked to an area of water that we never fished.  There were some nice pools in the beginning but it quickly turned into a trickle holding only 6 inch dinks.  We started to head back and I fished one of those nice pools that we skipped earlier and connected with the nicest fish of the day.  I landed him with my new Orvis labeled Brodin net that I bought earlier with my coupon.﻿

We headed back to the pool with the pair of monsters.  I fished the right side and Chul fished the left where we last saw the pair.  I spotted a serious fish follow my fly and start to sip it and I over zealously yanked the fly out of its grasp.  I saw his sides as he splashed out of the water.  Most likely a 12 incher or better.  Afterwards we headed out after trying pointlessly to connect with those pigs.  I even tied a small mouse pattern to see if that would interest them but they had no interest.
Posted by gourmetsportsman at 10:05 PM