I slept in on accident this morning as it was bone chilling cold.  It actually was a good thing as by the time I made it to the pond I wanted to deke up, I found it was frozen solid.  I would have been pissed had I woke up early just to find out it was a waste of time.  I spent the whole morning exploring for new areas, basically I wasted the whole morning driving around missing exits or making it to roads that were closed due to snow. 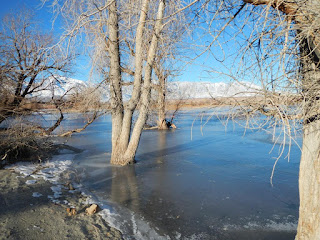 Bill told me of the area he hunted just before Christmas, I tried to make it there but the road was too sketchy for me to go it alone.  Since I was in the area I checked out a few watering holes that I never seen, of course they too were frozen solid.  So I turned back and headed to the lowlands.  I drove around looking for an area to jump shoot some ducks.  After sometime I managed to finally find an area that I could actually walk along the river.  I parked and after about fifty yards, I flushed a drake mallard and took him with the right barrel loaded with Bismuth number 5 load and he buckled as I was tracking him down, fifteen more mallards flushed and I took another drake I didn't track him as Kaiser jumped off the 8 foot bank toward the river.  I knew at least the birds fell on the opposite side within the reddish wood branches.  The river was too fast for Kaiser and he was reluctant to go in.  I climbed down and had to pick him up and put him back on the bank.  I rushed to the car and put on my waders and headed out with Kaiser to find a spot to cross together. 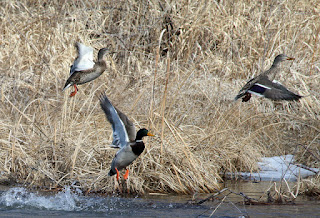 The banks on this section were too high so I put Kaiser back in the River and headed out myself.  I managed to cross and struggled to make it up the bank on the opposite side.  I looked through the vegetation and spent 45 minutes trying to find at least one of those birds.  No luck.  I went back to the truck and drove 20 minute to find a bridge to cross to get the other side.  Finally reaching the spot I let Kaiser out to see if his nose could find the birds but unfortunately I was not exactly sure where the hit the ground.  After about 30 minutes I gave up as we were running out of sun.  When I lose birds, I get pissed, I get even more pissed when they are fat mallards especially when it was my first double on ducks and would have been Kaiser's first mallard.  Oh well I guess that's hunting. 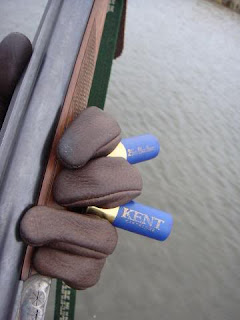 I drove to another spot I thought would be a good spot for some pass shooting.  Once I got out of the truck, three unknown ducks flushed and then a hen mallard flushed before I could even get my gun.  We walked along the river as the sun was setting.  Three small ducks flew overhead but were way out of range.  And after that it was time to head back to the motel. We'll see what tomorrow brings...
Posted by gourmetsportsman at 8:00 PM