Someone's Getting a Free Beer Or Two

Finally I've been able to get someone on a carp!   I didn't get on the water until about noon.  Much later than I ever would want.  I quickly noticed that the water had increased from the last time.  The good news was though that there was enough shallows to spot cast to them.  Chul was to arrive after work sometime after noon.  I started without him.  Fish were easy to spot even though the breeze was creating chop on the water.   In time I hooked up on a carp about 5 pounds.  Several blistering runs later, my phone ran with the distinctive cricket tone I gave Chul.  I picked it up while still fighting the fish.  He let me know that he had a work emergency and may not make it.  He would let me know if he could when he knew more.  I told him fine I'm on a fish!  I told him get out of it when you can cause the opportunities for fish are better than any other time he has come here.  About 2 minutes after we hung up, I had the fish within reach and it popped off.

Normally such an occurrence would leave me cussing but for whatever reason today I just moved on.  Within minutes I spotted more and casted to them.  I missed several.  I would either be late to set the hook, too fast to set the hook or just pull the fly away from the fish.  I was on a pod of fish when Chul called again I let me know he was here.  I let him know where I was on the water and met up.  I spot a few fish for him, by this time the wind was ridiculously hard.  Casting was now problematic and I was concerned that I had Chul come over again just to waste his time.  We fished together at several pods trying to get one to take. Chul as what seems like an everytime occurrence, sank too deep in the water filling his rubber boots with that nasty ass water.  I chuckled and we moved on. 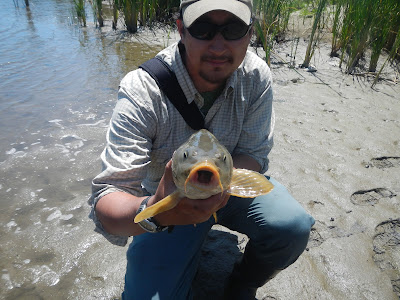 We found some more fish and I was casting to Chul's left when I heard a splash.  Initially I thought that he had fallen in until I turned my head and saw his Sage DS2 (the one I built) bent over.  Yeah!  I told him YOU BETTER NOT LOSE THAT FISH!  After several nice runs he brought it in and I helped him land it.  At just under 4.5 pounds on the boga, not bad for a first carp.  Finally he got one.  Tuck looks like you are in beer debt.

Afterwards I managed a dink largemouth just so I wouldn't be skunked for the day.


Posted by gourmetsportsman at 6:52 PM