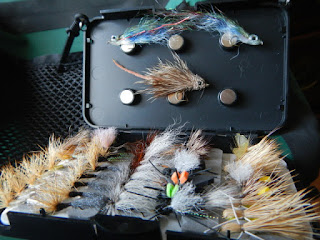 Arriving just in time for my weekend trip, the C&F design Chest Patch will be my primary local water fly box.  Fly selection is of no real  consequence with out local trout.  They are aggressive and will generally take just about anything you throw at them.  As a result, I refuse to cast anything but dry flies at them.  Sure I could catch more fish and larger ones at that if I went subsurface but I'm content with fishing them "properly."  But how I look at it is, if I wanted to nymph I would just go to the Sierras and catch some fat fish instead of trying my luck at the local dinks. 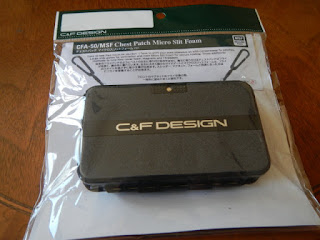 When I opened the package today I was somewhat disappointed in what the fly shop sent me.  I ordered the older 10 row Chest Patch and they sent me the redesigned version with the one side containing six magnets.  Since I will unlikely be carrying any more boxes while fishing locally I wanted more fly capacity. The old version had the ability to carry a maximum 175 flies.  The new version carries a maximum of 85 plus whatever you can carry on the magnets.  With dry flies, due to hackle and a more bulky materials that fly capacity shrinks at least half. 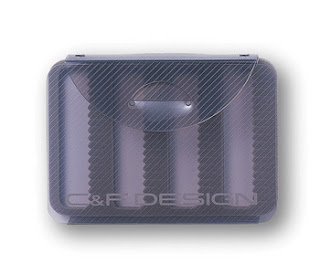 As anyone who fishes with me knows, I am a big fan of C&F design boxes.  This patch will replace my old C&F MSF Fly Patch and Protector that is now on the bottom of some Deep Creek pool that fell off my vest years ago.  While the ideal of that product was good the execution was poor.  The patch is connected by a pin that is glued on to the system insert.  The glue is weak and failed on me, thus I lost several awesome flies that slay the local waters.  The Chest Patch design is similar as it appears to use the same glued on pin system it also has clips that can be attached via split rings for fail safe in case the glue from the pin fails.
Posted by gourmetsportsman at 6:32 PM