Carping So Good I Shit Myself (Not Really) 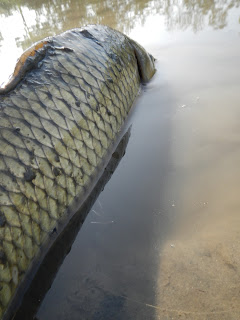 Disappointed again last night at not being able to obtain Barrett Lake tickets and seeing I was in the neighborhood this morning, I decided to hit the local carp waters.  The waters have receded somewhat and although they are not as ideal as I would like, it is fishing quite nicely.  Even with the crazy weather this month, the tules and the wildflowers are growing rapidly.  The vegetation is about neck high now.  The moment I was near the water I was seeing tailing fish.  Missing my first two opportunities, I finally managed one (3 lbs) within the first hour.  The second fish was the smallest I'd ever "landed" here at one pound.  Landed is in quotations because I foul hooked it in the fins.  It never ceases to surprise me how small fish look underwater yet when you pull them out the are so much larger.  When I first saw this carp, it looked like an eight inch fish.  It was not until I pulled it out of the water did I realize it was a 15 inch trout sized carp. 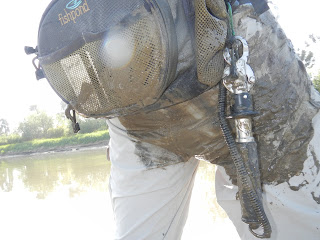 Not long after I managed a 4.5 pounder.  After releasing it, I hadn't noticed I was in some sinking mud.  I was at least shin deep in the mud before I moved and lost  my balance.  I feel right on my ass landing in some of the nastiest black mud ever.  Although I couldn't see I could only imagine what it looked like-as if I shit my pants.  To clean my pants I squatted over the water as if to take a dump and started scooping water on my ass while trying to clean off the mud.  I only wished one of my fishing buddies were around to witness this as it must have been hilarious.  Thankfully this area is not widely used by joggers or morning walkers as I can't imagine what they would have thought I was doing. 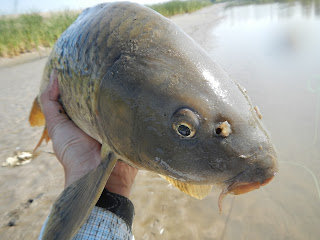 After a rather undignified clean up session, with my ass now all wet, I found some tailing carp.  In time I managed to get one to bite.  This one a 5 lber.  Though he ran quite a bit, it did not spook the others and they only moved a few yards away and continued to feed.  I spotted a rather large silhouette and I casted a few feet ahead of it and stripped it slowly under its mouth.  He took and ran fast and far.  Most of the carp this year have not given me the blistering long runs they did last year.  This one was the exception and after about 2 minutes of fighting the fly came unglued.  I managed to see its head during the fight.  While not the 9.5 pound monster I caught earlier this year, it could have been the second largest fish I ever hooked up here. I started to make my way back to the truck looking for tails on the way back.  A pod of 5 of so rather large carp were on the other side of the river.  I double hauled to reach the other side.  I lost connection with the fly line with my stripping hand.  The carp took it on the drop.  I set the hook with only one hand by rotating my waist to the right.  Surprisingly the fish was on.  This one was about 3.5.

While trying to cast in front of a cruising carp I spooked it but continued to strip and felt a light bump.  As I pulled him in I noticed it was a baby bass.  Its nice to see that the bass have successfully bred.  This is only the third bass I've ever caught out of here.  All fish caught on a BH Rubber-Legged Hare's Ear on a Sage 6 wt XP with Abel Pt5.

Posted by gourmetsportsman at 2:12 PM