Some New Flies For Barrett Lake

Two more days until Ed and I hit Barrett Lake for the first time this year. According to recent reports, gear fishermen are having 100 fish days. It sounds like Barrett is back. Although lately much of my attention has been on carp, I've been spending alot of time at the vice tying new flies for bass. This year I'm trying something different, I'm going BIG. Most of the flies are much larger than I usually fish. I'll be bringing my 9 weight so casting them shouldn't be much of a problem. 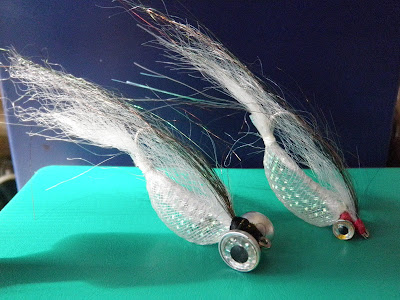 These shad flies were actually tied several years ago but I never gave them a real good chance. Originally I had tied it with Icelandic Sheep as the wing. But since I didn't like how unruly sheep can be I cut them off and replace it wth SF blend topped with angel hair. The big eye version has a large rattle. 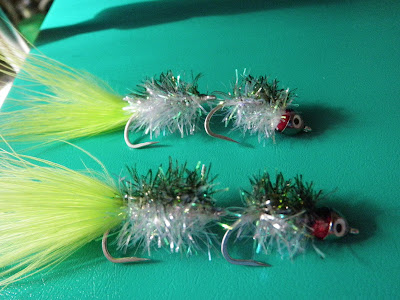 These articulated shad patterns were my attempt to mimic a crankbait action. The trailing hook is first wrapped in foam before wrapped in estaz so it will ride above the front hook as it dives tbeacuse it has a conehead. I've not tried it yet some I'm not sure if this theory actually works. 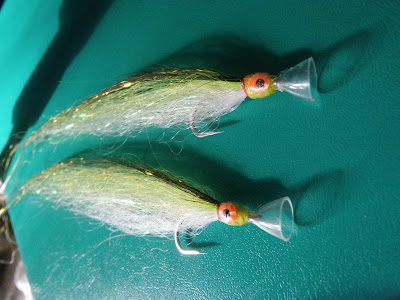 I've had these Marc Petitjean Magic Heads in my drawer for a long time and I decided it time to give them a try. 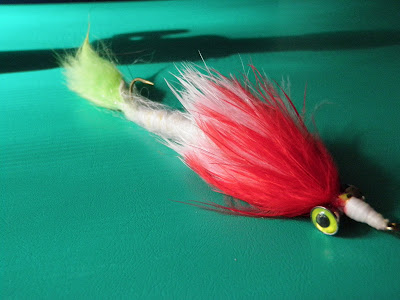 This is another articulated fly with the trailing hook is wrapped in foam before wrapped in mohair. 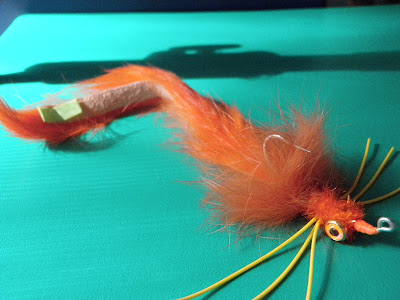 This leach pattern is nothing new but I did make one addition. As you can see in the photo, the end section of the tail I've glued a small piece of foam so that the tail floats up and undulates. This ideal is not mine I got it from one of Conway Bowman's friends who invented a much more elaborate fly. I liked the ideal for a stationary fly that still entices bass. Such a fly, I would guess, be and amazing fly during the spawn and placing it on the bed and let it sit. I'll have to try that theory next year's spawn. 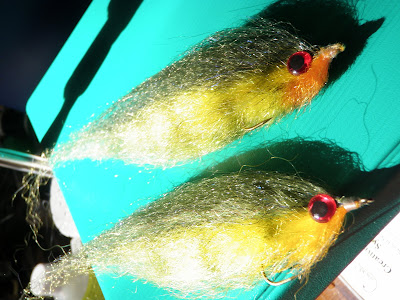 This is my version of Enrico Puglisi's bluegill fly. I used SF Blend instead of EP's fibers. 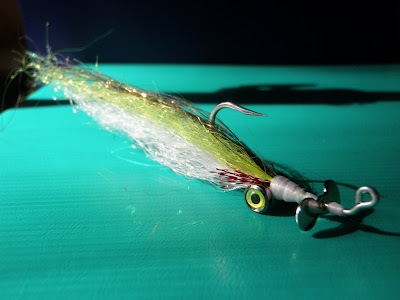 This is nothing new, a clouser with a propeller. I tied it big and on a jig hook. 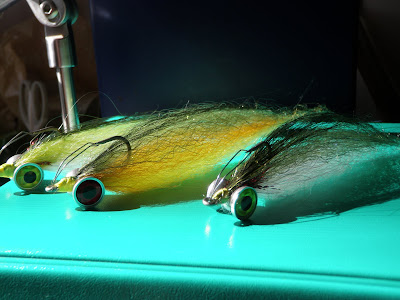 Mega Big Eyed Clousers on 1/0 TMC 800 hooks. These are six to seven inches long and I added weed guards on some so I can throw them in some really nasty stuff. Tied in bluegill colors, olive/white, purple/white, orange/white, and chartreuse/white. These will becoming with me to Newport Bay this year. 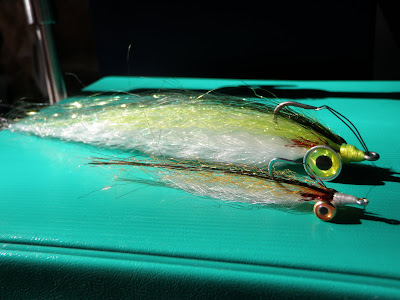 A comparison with a clouser I normally fish for bass and at local bays.
Posted by gourmetsportsman at 5:01 PM