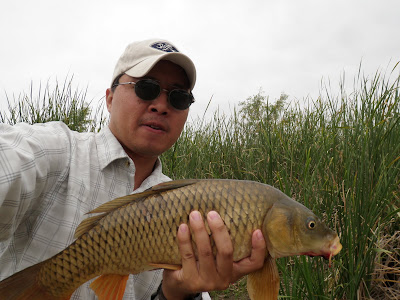 When I awoke this morning at around 7, I looked out the window to find that it was already breezy outside. I had intended to try my luck at carp with the one weight but with the wind starting early and with no sun in sight I thought I'd better try that another time with more optimal conditions. Having received the package of Gyotaku material I order a week or so ago, I took the carp I caught and kept out of the freezer last night. I figured I'd try my Gyotaku prints this morning instead. After a quick breakfast I decided what the hell and changed my mind, I'd give the one weight a go. By this time it was about 9 and when I reached the water it was about 15 after. 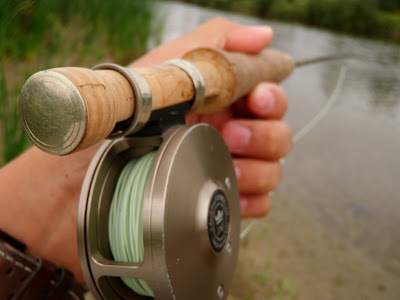 Within the first 10 minutes, I saw a pod of about three feeding. I casted several times until one took. My J. Austin Forbes reel screamed as the carp ran. I worried that the carp was about to spool me. That reel only has maybe 20 yards of backing in addition to the fly line. Eventually it stopped its run, I tried to gather line by reeling as fast as I could but with a diameter of maybe 2 inches, it was a bit pointless. The fish continued to come toward me as I tried to keep the line tight. After about a 10 minute fight, the fly flew out of the water toward my direction. Spit the hook out. Note to self don't bother with the reel, its pointless. It doesn't even have a drag. I'll hand line the next one if I can get one. 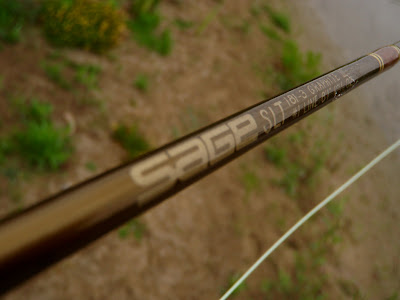 With the wind picking up, it became more and more difficult to spot a carp let alone cast to one. I'd see one or a group and try to throw a cast that would go absolutely nowhere near where I was aiming. One weight in even the slightest breeze is amost impossible to cast more than a few feet. As time and fish passed, I found a lone feeder, and made a few casts. The carp took the fly and ran and continued to run. The reel zinged like crazy, one of the best sounds in the world. Although this was a smaller fish than the first hook up, I still worried that I'd get spooled. Eventually the fish tired and I tried to make up line. Again I used the reel and reeled in as fast as I could but it was worthless, I remembered to just hand line the fish in. It ran a few times but I managed to hand line him in. With the boga I weighed the fish. A four pound carp on a one weight in a breezy sunless conditions. Talk about making things difficult for oneself. 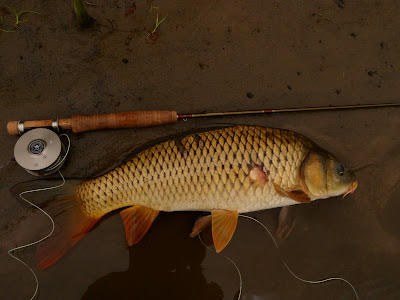 Posted by gourmetsportsman at 2:20 PM