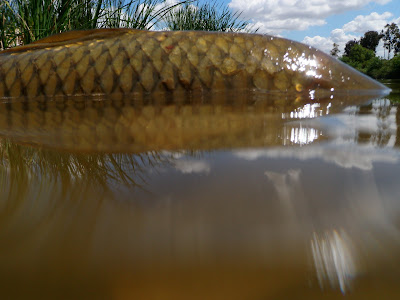 My intention was to fish yesterday morning but the Lake Barrett trip the day before just took too much out of me to motivate myself to hitting the water. Last night I thought I might have regretted that decision as Sunday was a perfect breezeless day. Also by 9pm we had a light misty rain that may have affected the fishing today. My fears proved unwarranted. 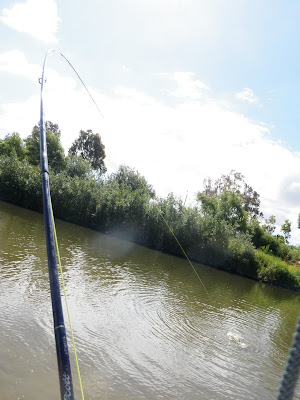 The carpin' was amazing today. I hooked up on four landing two losing two. The first fish was huge. Making a long cast to the other side of the river, I hooked a big angry runner. He pulled drag making three blistering runs. On the third I got alittle too zealous and yanked and reeled while he was making a dash. That stupid move cost me the fish as the tippet of trailing hare's ear broke off. 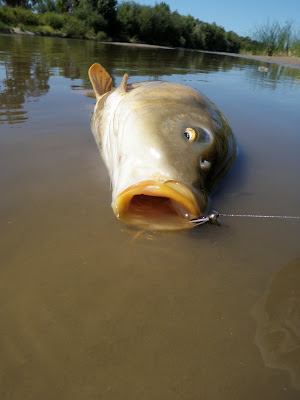 I made it to another area and casted to a lone feeder. Fish on! A bit of comedy ensued. I strip set my carp and once he runs I point my rod at him and let him run a few yards before I lift the rod. In doing so, the rod disassembled at the second and third section. I had to try and fight the fish with half a rod. Thankfully these carp only run when they feel pressure and let up when it gets slack. Managing to reattach my rod I continued the fight but for some reason I could not reel any line in. Perplexed I looked a the rod, and in assembling the rod the line had wrapped around the guide essentially creating a brake. Quickly I disassembled the rod, cleared the line and put it back together. I thought the fish had been lost but no he was still on! Having no intention on losing another, I cautiously fought the fish. Eventually landing him. This time the fish took the legless aggravator, my go-to fly. 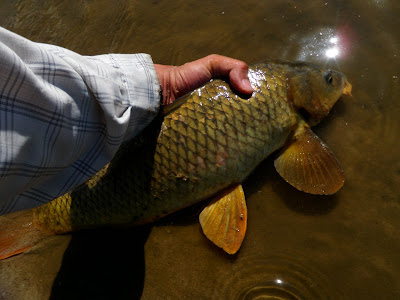 In time I found a pod of 4 or 5 rummaging around. Making at least 30 casts, I finally hooked up on the largest in the group. I was within a forest of cattails and had to fight the fish while trying to get out to the clearings by lifting the rod high, hoping the line would not clip the high cattails. Making it without losing the fish, I finally landed it. I really should bring my boga, I always forget. Its hard to judge weight when you have nothing to go by. 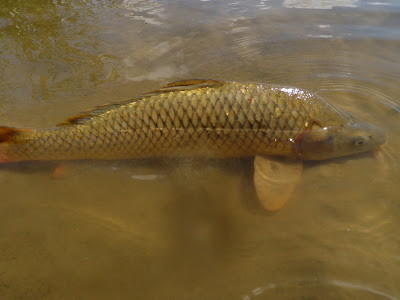 The wind had really picked up by now so I decided to head back to the truck when I suddenly saw a lone feeder near the bank. Casting to him on the second try, he took. I fought him but on his third run the fly flew back toward me. After that I had enough and left for lunch.
Posted by gourmetsportsman at 11:52 AM