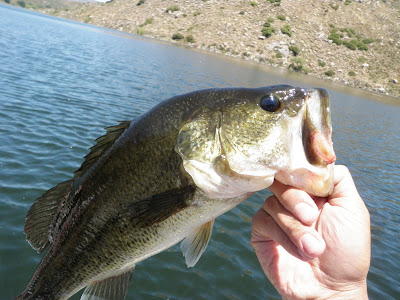 Barrett Lake continues to please. Ed and I made what is starting to become an annual trip to this fishery. We've been excited by recent reports of 100 fish per angler days by gear fishermen. Although we knew fly fishing numbers were most likely not going to reach that high, both of us knew we were likely to get into some respectable numbers. We were right between the two of us we landed at least 70.
Since Barrett has some unique entrance requirements, getting here can be brutal for anyone not living in San Diego County. Ed made it to my house before 10pm last night. We made our two hour drive and made it to the gate just after midnight. We slept in my LR3 until the gate opened at 5am. Outside temperatures according to the temp gauge went below 35 degrees. Managing a few hours of sleep we patiently waited until we could fish.
Before 5am, the gatekeeper checked us in and let us through the gate. Once we set up our boat, we set off to a point just at the opening of the Hauser arm. Dahlberg Driver was Ed's first choice. I would start of with a Mega Clouser in blugill colors. On Ed's first cast a largemouth blew up on his fly once it landed and proceeded to miss the strike. He would eventually landed at least 4 largemouthes here on topwater. Seeing Ed with some sucess I abandoned the big fly and moved onto my 6 weight loaded with Webb's popper fly. As the sun was starting to come up, the topwater bite slowed down. As always it seems, Ed starts off with a huge lead. He must have had 5 or 6 fish before my first take. I moved on to the Thomas and Thomas Helix 5 weight SW, my favorite rod, loaded with 150 gr line. Pretied with an Articulated Super Sexy Fly (ASSF). This new fly proved its worth. I lost the first fish just at the boat but it produced at least eight or ten before I lost it in the submerged matter. I moved on to the Barret Shad fly. That fly continued to produce numbers as well until I lost it.
Ed was producing some serious numbers as well but ran into some bad luck. His Airflo 200 gr line ripped when he was trying to extricate his fly from the branches. He began fishing his 6 weight floating line with a long leader and a purple wooly bugger. Although he had success, he definitely was limited in where and what he could fish. Its both our opinion that he'd had much greater numbers if he'd had his 6 weight sinking line with him all day. He did fish for sometime his 300 gr 8 weight but gave that up as he, as with I, doesn't much care for bigger rods unless its really called for such as the blue waters.
My top flies were in order of most fish caught: ASSF, Formal Jig Hook Clouser with Propeller, Barrett Shad, Floating Tail Bunny Leech, Bluegill Clouser. Also I did catch one LMB with a size 12 Enrico Puglisi's Bluegill until I lost it in the submerged structure. The largest fish of the day was 2.5lbs taken on Propeller clouser. The second, a 2 lber, was taken on the ASSF. All fish for the were decent sized, no dinks in the bunch for either of us. The several crappies also were of good to better than average size.
None of the Big Flies produced, not so much as a bump. Even for Ed who had slightly smaller but nonetheless large flies failed to tempt a fish to take. I had several SDR (short distance releases) most were just a few feet from the boat. I was at least able to see most if not all of them. Some including my first crappie were of very good size.
We did not keep track of all our fish but we had at least 35 a piece. I do not recall Ed catching anything but LMB. I, on the other hand, had at least 5 crappie, losing several that I did not count as catches along with several LMB as well. We had quit fishing so we could make the first train out at 2pm. Our intention was to stay until 3 but the wind began to howl quite hard, effectively putting the fly rodding to an end. This has been the best I've experienced Barrett. It appears that Barrett is back to its old self which is nice. I hope to make it out again this year but that seems unlikely for now. If I do make it out there it will be most likely next month or the following during the African hot days of summer. Those days are not very pleasant. 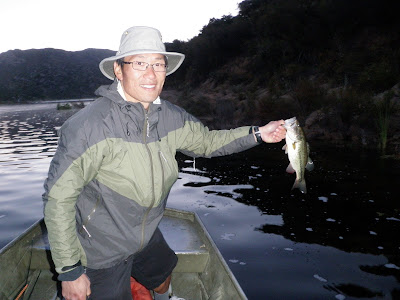 Ed with the first fish of the day. Taken on a Dalhberg Diver. 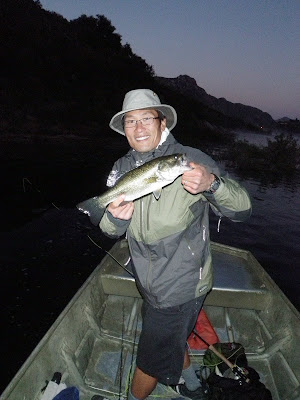 More fish taken on the Driver just before the sun came out. 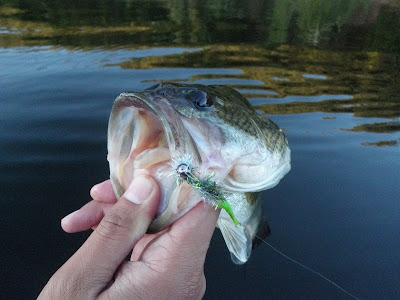 My first bass on the Articulated Super Sexy Fly. 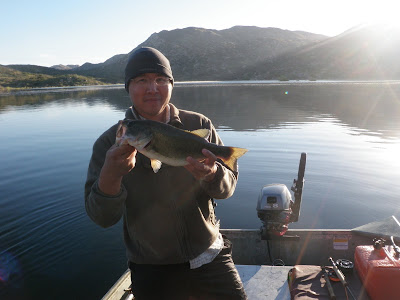 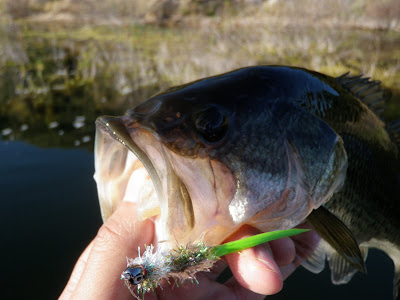 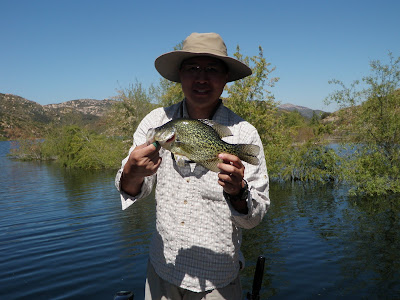 This crappie was taken on a blugill clouser. 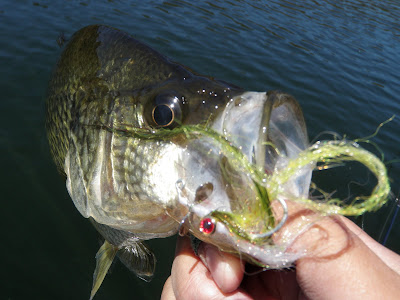 Jig Hook Clouser with propeller was the top fly of the day for me. 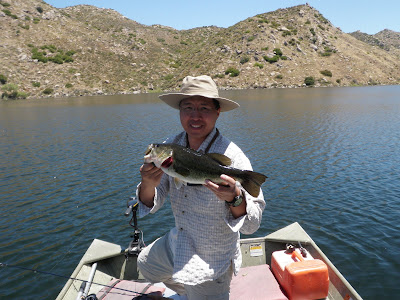 Two and half pounder on a propeller formal jig clouser in chartreuse. 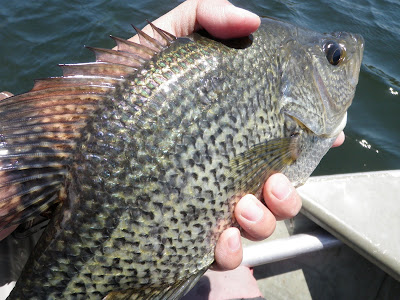 One of many crappie of the day on a Barrett Shad Fly. 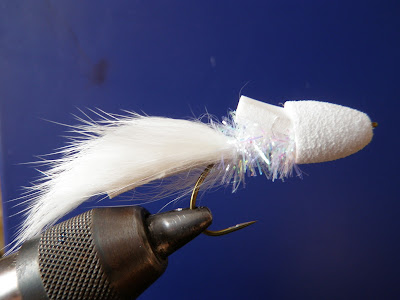 One fly I forgot to try, since Ed was having so much success with the Dahlberg Diver early, was my Lazy Man's Driver. I even tied one with a rattle. I shall remember to try it next time. 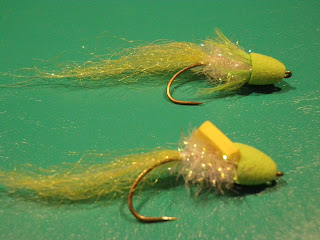 Posted by gourmetsportsman at 5:09 PM