Should Have Worn Snow Shoes 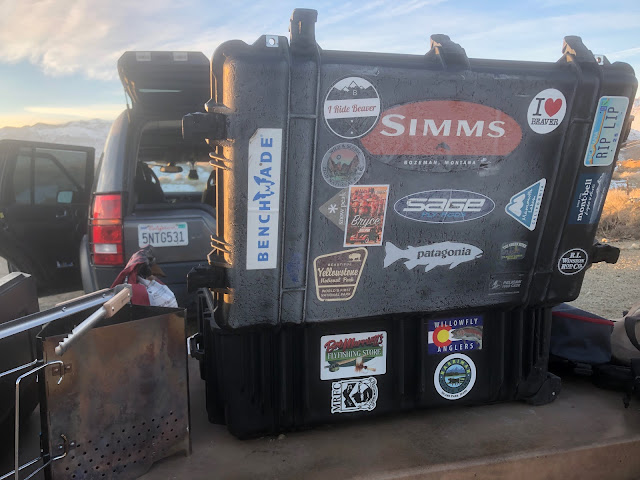 In the morning I made a simple breakfast of bacon and egg sandwiches before heading north to the frozen tundra.  The morning was cold and will be evening colder when we made elevation.  I never did get cold though sleeping in the Rover.  The night got down to 21 degrees but my zero degree down bag and my Germany Army wool blanket kept me warm. 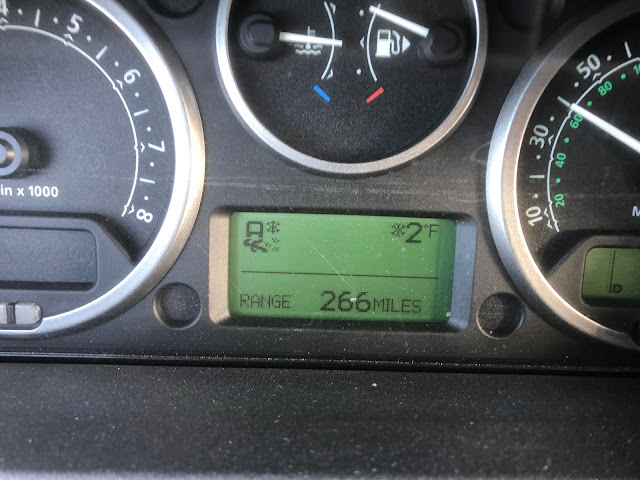 We left to drive up the 395 and once we reached the crest we slowed down and started drive more gingerly as ice was now on the road.  Last winter on a trip by himself Chul spun out on the turn at Benton Crossing at took out the stop sign.  Neither one of us needed a repeat of that so we took that turn cautiously as it that section was still iced over. 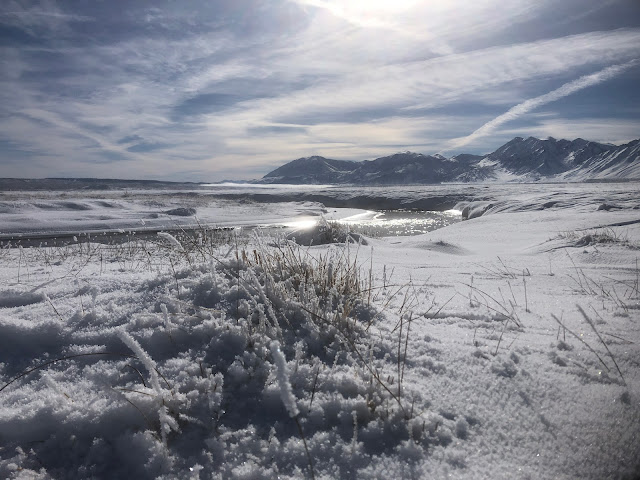 We got to the water and there was already at least ten trucks parked at the entrance.  A lot of anglers.  As we started to get of gear together we debated whether to bring the snow shoes.   Thinking the anglers ahead of us already blazed a trail for us we opted to to leave them behind.  It proved a mistake as even hiking in that packed snow was not as easy as we thought.  As we made our way upstream Chul's boots began to contract from the cold and bind on his toes causing extreme pain.  We didn't even make it to the Hot Creek Confluence before we started to fish but with about ten groups ahead of us and with Chul in pain we decided to fish downstream and head back to the trucks.  I maybe had one hit and that was it.  Slow fishing. 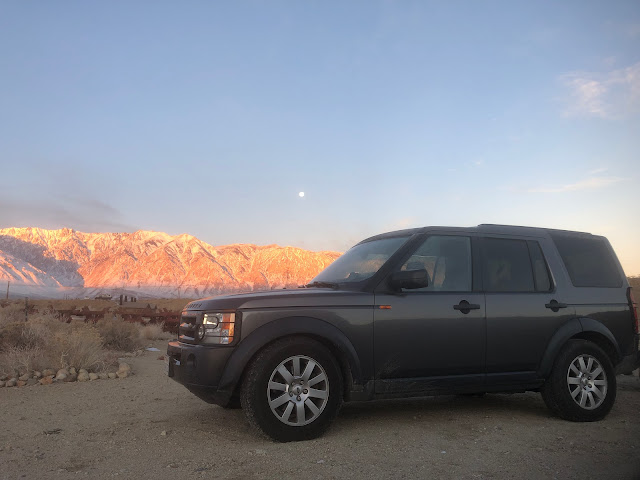 When we reached the parking lot we chatted up a guy in a Van conversion.  He had camped there for the night in -6 degree weather and had his battery died.  I offered him a jump with my portable jumper battery.  At first he declined as he had AAA on the way but later reconsidered figuring better go with a sure thing than wait for someone.  So when I reached my truck and got the charger and then hooked it onto his battery but with no luck.  This van was a rental and he told me the battery compartment was in the back.  Now that I think of it I don't believe that was the car battery but the battery for the mobile home section. So that may have the reason we couldn't jump it.  I did what I could and he'd have to just wait for AAA.  We proceeded to head down the valley but we'd stop for lunch before we did.

For a couple years KB had told me how good the spaghetti and meatballs were at the Shell station at Crawley so we decided to check it out.  They didn't have that item that day so we got meatball sandwiches instead.  Wasn't bad for gas station food but wasn't anything to write home about.  After the quick bite we headed down south back to the Lower in the hopes there was still a dry fly bite.  We'd fish further down than yesterday and it suck.

We went back to camp and I decided it wasn't worth staying the night only to fish a couple hours the next day.  I figured it was better to just go home rather than spend the night in the cold.  On the way though we'd stop at Victorville to get some burgers at Freddy's, one of their few locations in California.