Once in a Lifetime: First Outing of 2022 Steam rises off the bush as I pee on it.  I am cursing myself for wearing waders as I hate hiking in waders.  Although its 41 degrees I'm sweating and peeing in wader absolutely sucks especially when you don't wear your zip up version.   My regular fishing buddy and I took to the local mountains to start off the New Year with a fishing outing.  Last year it took me five months to get out, I wasn't about to do that again.

We had debated which local river we should check out.  After deciding Location X was probably covered in snow we chose another option lower in elevation.  We knew we all the rain we gotten the past weeks it was probably raging.  And when we arrived we weren't wrong.  Water was glacial looking bluish green in color and running fast.  We started fishing some spots closer in that we normally bypass but because there weren't the crowds we started early but it was a a waste of time and we should have just hiked in more like usual

It wouldn't be long though before I managed my first rise.  I launched the little dink behind me as set the hook like a bassmaster.  It ended up flying off the hook 10 feet behind me.  Not long after though I'd land my first fish of 2022, a dink and more dinks after that.  Biggest fish was probably no more than six inches but I'd catch many of them.  Chul had already cheated and put on a nymph rig on once he realized the raging water wasn't conducive to dry fly fishing.  I refused.  I refuse to fish anything buy dries in our local waters.  Although I may throw streamers and that's only because the fish tend to be smallish and I find it amusing for a fish to hit a fly nearly it's own size.  We decided to fish for another 30 minutes before heading back.  As we made our way up, my concentration was on the water looking for the perfect piece of dry fly water.  On one run I was so focused on the water I failed to realize what was to my left.  Only when my periphery caught what I thought was a moving bush did I turn my head and notice three Bighorn Sheep grazing.  I almost had to do a double take as I couldn't believe they were so low in elevation.  I called Chul who was fishing downstream of me and pointed to the rams.  Both of us stopped fishing we watched in awe of these magnificent creatures.  Cursing ourselves for not bringing a proper camera we both tried to capture the moment with our iphones.  Poor lighting and garbage zoom we both failed to get any decent pics. 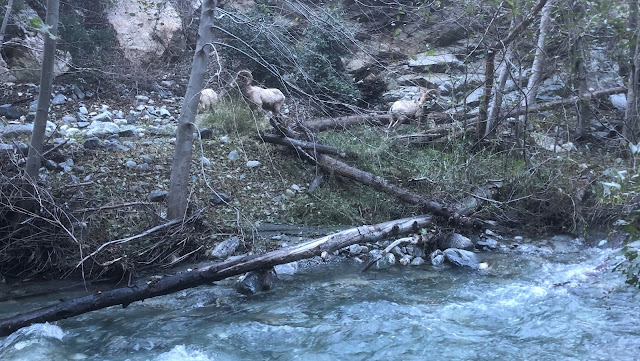 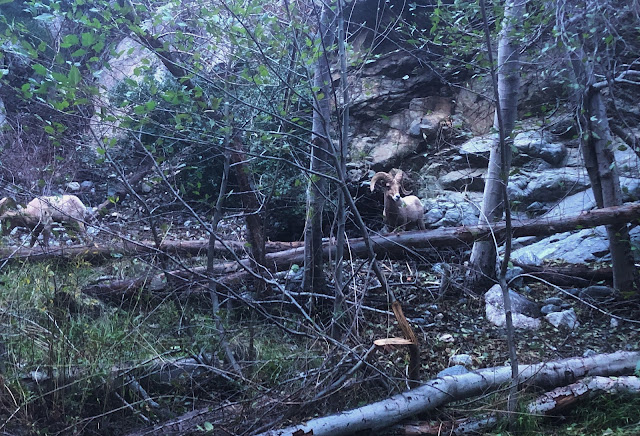 I've fished these mountains for over 20 years and the closest I've ever got to a Bighorn was when Chul and I saw them in the opposite mountain hundreds of feet above us in a valley of a different range.  Even then we only noticed them when we heard them and had to glass them with binos.  On this day we could have pet them (although that would not have been wise) we were that close.  I've fished among the bison of Yellowstone, elk in the sierra, deer and moose in just about every mountain state, I've even been face to face with a linebacker sized black bear here in the San Gabriels while coming around a bend hiking back to the truck after fishing but this was probably the most memorable.  These are the reasons you get out afield.