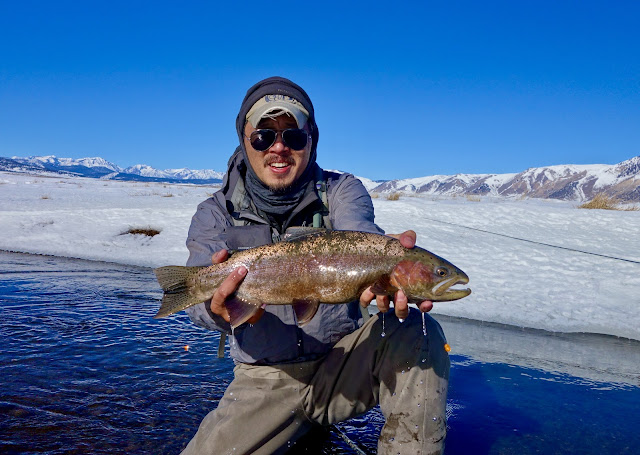 End of last year we tried our luck here on the Upper without any success.  The trip was a bust.  Out of laziness we'd chosen not to wear our snowshoes and we paid the price.  We wanted our revenge.  When we arrived at the parking lot two guides had already set off on their snowmobiles and three trucks were parked.  I assume two must have been with the guides and the other fishermen were fishing near the bridge. 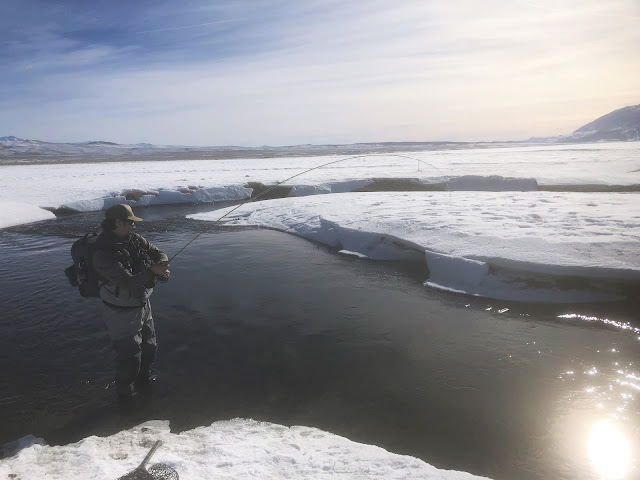 So we hiked in about a mile to one of our favorite spots.  From there we'd have the next mile or so we'd have the river all to ourselves until we caught up with the snowmobiles in the afternoon.  Not long after reaching our spot Chul hook up with a nice hen.  He told me that had his indicator set at 5.5 feet so I adjusted my depth to the same. 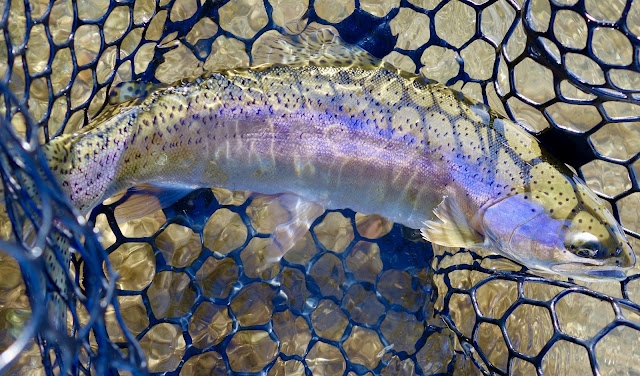 After landing the fish and gave me the hole expecting a pod to be in there.  I drifted my fly exactly as he suggested multiple times.  Each perfect drift resulted in nothing.  Odd.  Was there only one fish in there? 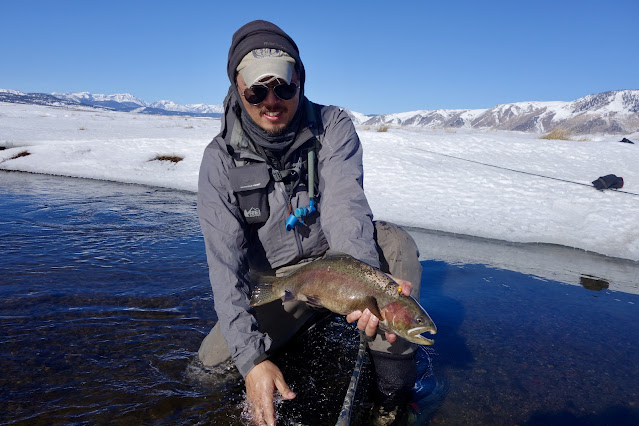 After several unsuccessful attempts I moved to the next hole.  The honey hole.  I made my long casts and was refused at every attempt.  Was it possible the guides had already blown out the hole?  I checked my tippet and noticed that I was fishing without any weight.  How long had I been fishing without it?  No wonder I couldn't get any takes.  After securing another water gremlin it didn't take long before I got a strike. 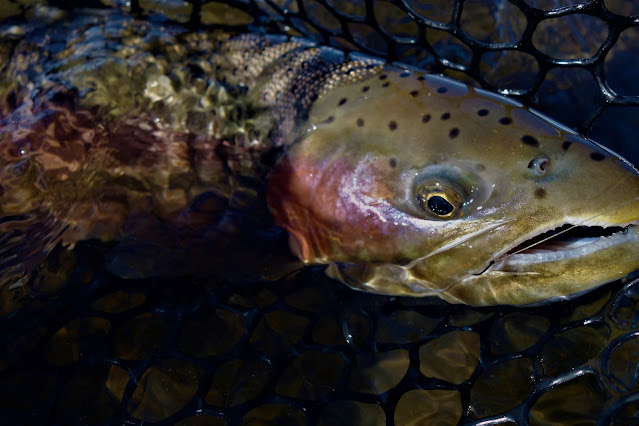 Once I had him on the line he ran through the hole and spooked at least five other fish.  I saw all the swirls.  This buck had some fight in him and put my five weight to the test.   He then ran me downstream and then upstream.  Eventually we'd landed him.  From the scaring this trout I assumed it had been in the system for a while. 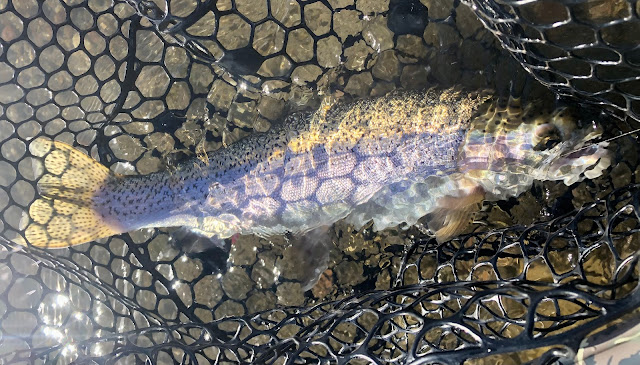 After landing the fish I told Chul to take the hole and not long after he was on another hen.  The pod moved over slightly into the seam and against the weed line which is where Chul got the strike.  This fish too ran upstream.  The fish buried him into some structure and as he tried to pull him out we worried this fish may be lost.  But eventually the fish released after some serious pressure.  So much pressure I worried and warned him to watch that bend of his rod.  I thought it might break.  We landed her and released her. 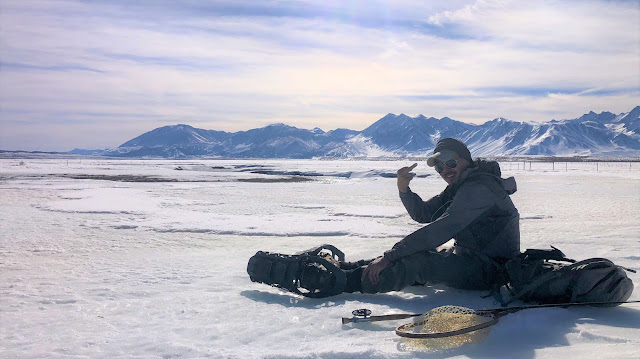 All the hens appeared to be a new batch while the buck seemed to have been in the system for a while.  We would continue to fish until we reached the guides.  We knew they were sitting on another honey hole some 200 yards away.    I decided to wait them out and have lunch as I was starving by this time as I didn't have much for breakfast.

There was plenty of bends to fish before we would reach them but as we moved closer they simply sat there and never moved.  After finishing lunch the holes ahead of us were now occupied by an angler that had hiked up while we were taking the lunch break.  At this point the sun was at it's highest and we haven't had success during this time of day and decided to head back to the trucks. 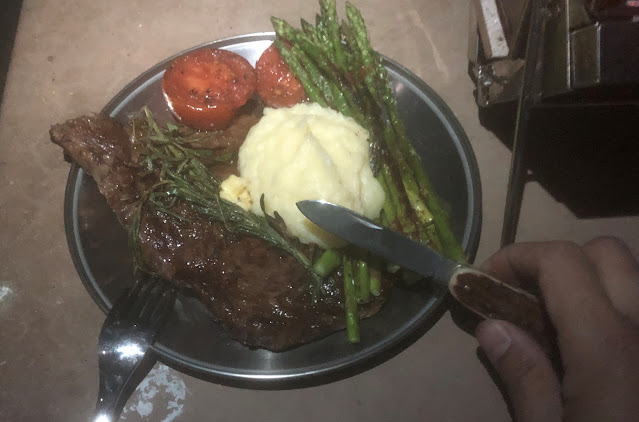 By this time it was 1:30 and we decided to head down to the valley and fish the lower in the hopes of catching the afternoon hatch.  Armed with our dry flies we searched the river for rises.  The hatch never materialized and I only saw two rises the hole time.  I threw a few probing casts throughout river but it was more casting practice than actual fishing.  Speaking with an angler who had been fishing all day he said he saw no rises at all.  When 3:30 came we had already quit and I made our way back to camp as Chul went to return his rentals. 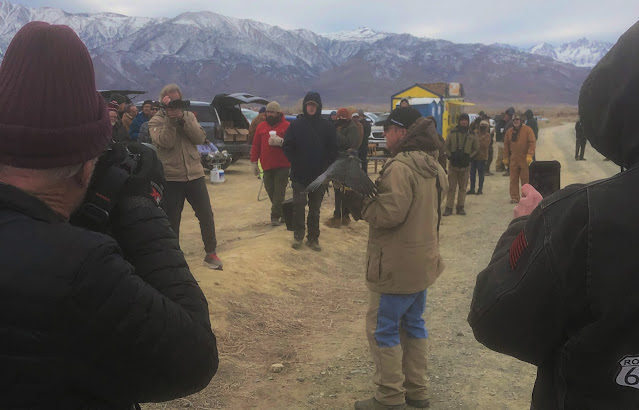 The next morning we scouted some areas but chose not to fish them.  Afterwards we checked out a falconry event that Chul's buddy was participating in.  We never found him but we watched some of the trials before I made my way home.  On the way home I'd stop by Freddy's for burger fix on my way home after taking an alternative route home which was far more pleasant drive than the usual route. 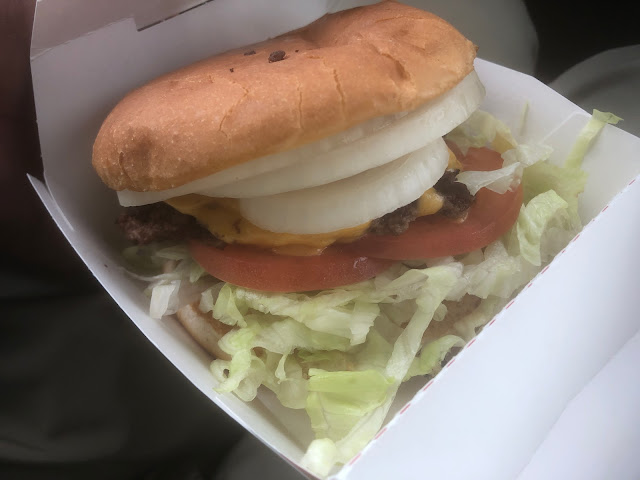