Salmon Fishing in the Yemen? 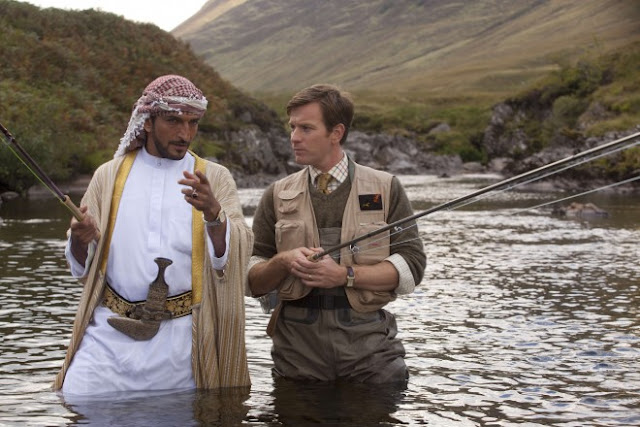 I was surfing the web and found this photo.  I originally thought that it was Ewan McGregor actually fishing with an Arab.  After reading the article its a movie still from Salmon Fishing in the Yemen, a small movie that apparently out now in select theaters.  And I thought I looked foolish in all my fishing gear...It would be quite the experience if I were to run into someone on steam looking like that in all Arab garb, it would make quite the story.  Maybe even better than some of my friends' such as walking in on a nude photo shot, or the time one of them accidentally snucked up on an old timer taking a dump, or the time one walked upon a "love nest" between a couple of lover birds, or the time one went to the stream, saw a boot near the water, went down to pick it up to throw it away and it was attached to someone...who wasn't alive with two bullet holes in the head (welcome to L.A.).  Ok maybe it wouldn't be that interesting.

Trailer for the movie:

I typically dislike celebrities.  I think most are douches and that is what I initially thought of Ewan McGregor when he arrived in the Hollywood scene.  But when I saw his documentary, Long Way Round, about his road trip with best friend and fellow actor Charley Boorman, I changed my mind and became a fan of his even though his Star Wars were the lamest movies ever.  I guess that wasn't entirely his fault though.  In the film, Ewan and Charley ride BMW motorcycles eastward from London to NYC, camping, off roading and sight seeing along the way.  It was quite the adventure and fun to watch.  So much so I ended up buying the DVD.  They did another film years later, Long Way Down, where the start from Scotland and drive down to South Africa which I didn't feel was as good.  It seemed some scenes were not as natural and even some jokes were somehow preconcieved.

Will I watch Salmon Fishing in the Yemen?  Probably not, at least not in the theaters as I never go to them anymore unless of course it's on a date.  Since this is a romantic comedy it may actually be a good date movie, at least you'll be able to see some beautiful scenes of Scotland with Spey rod action(hopefully the actors learned how to cast properly or at least had stunt doubles).  I would probably end up renting it when it comes out on DVD.
Posted by gourmetsportsman at 11:20 AM