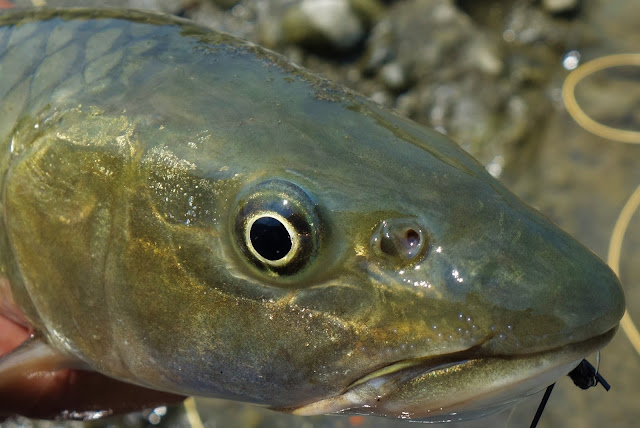 My last fishing outing for this epic adventure was the return to the mahseer grounds.  This time with my new friend Danny.  The fly fishing community is small in Taiwan.  Almost all of them are on a Facebook page and all know each other either personally or through FB.  I got a friend request on my FB page from Danny after coming back from Japan.    I normally don't accept "friendships" from unknown people but I noticed Danny was friends with Donny so I accepted.  Once I did he messaged me and offered to take me out.  After going through his timeline checking all his fishing posts of large mahseer, I agreed without hesitation. 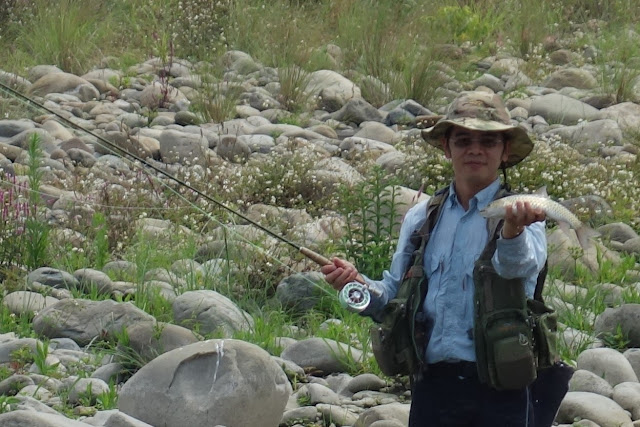 I left early for the first train of the day to head out to Banchaio to meet Danny who would pick me up there.  As I exited the station, Danny was waiting for me in the parking lot and after brief pleasantries we headed to toward Hsinchu.  We'd be fishing the same river as Donny took me earlier this trip but further downstream.  Danny had a different approach to fishing than Donny.  First he didn't fish first light.  He said most of his fish won't rise until past 9am.  So when we arrived into town we stopped by a 7-11 for breakfast and for some lunch to pack in.   While eating Danny told me that these mahseer in this river, while native to Taiwan, are not native to this part of the island.  They were transferred, most likely by anglers, from Hualien (the Eastern part of the country).   As with any introduction of a new species, it altered the river and mahseer started to dominate and weed out the native fish, angering those anglers who targeted those species.  Danny take is a more pragmatic one.  For one, Taiwan has a lot of imported foreign fish in its waters, from tilapia, carp, African catfish, cichilids, and even peacock bass, so at least these fish are domestic and native to this land.  Besides they offer great sport. 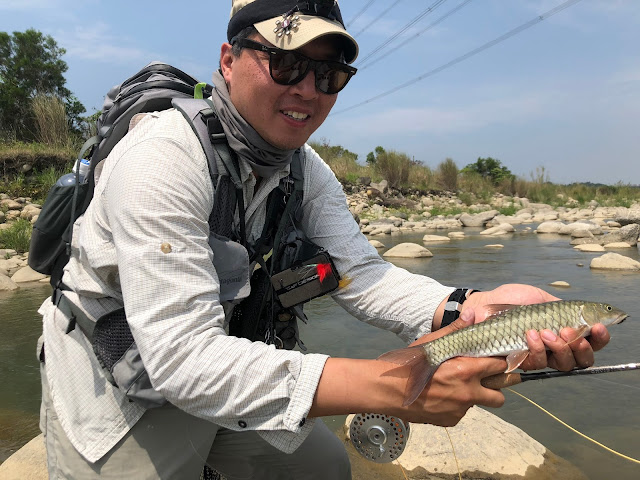 After finishing our meal we drove to the river.  We parked and headed to the water passing through some jungle and then through a small banana farm.  Danny lead the way and picked up a fallen branch using it to pound the ground to spook any snakes that may lay near.  Eventually we made it to the water and this section was big, deep, slow and void of any significant current.  Danny let me know this section was hard to fish but was loaded with big fish.  These fish are spooky and presentation is the key to getting these fish to bite.  Danny suggested I practice my pick up and laydown cast before we headed out on this outing.  Of course I'm in a city that I'm not too familiar with so I had no opportunity to do so but I see the benefit of knowing how to use this cast here.  You want to keep false casts to a minimum or even non existent.   I tried this cast on the water and simply sucked at it.  First I'm not used to the cast. Second I'm fishing a new 8 foot rod that had little to no time with it prior to this trip and was not used to the timing of the slow action.  Third I was using a double tapered line that isn't the greatest for shooting line.  I was also making some common mistakes with this type of cast such as starting with the rod tip too high and not starting it on the water. 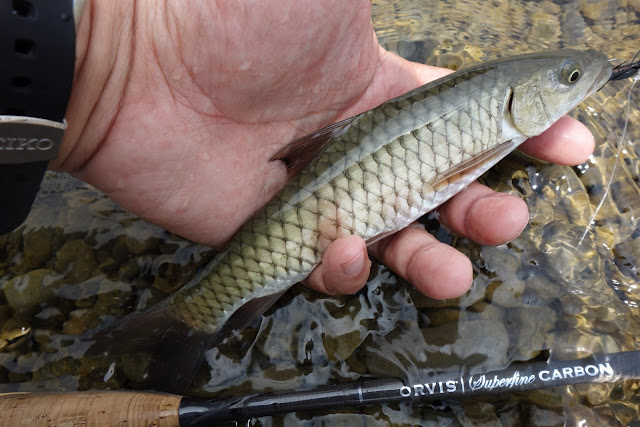 Danny left me alone to try my luck while he started downstream of me.  I managed a few rises but could not connect with any.  Every time I turned my head Danny's rod was bent or he was in the middle of releasing a fish.  He would give me a few pointers when he passed me while moving upstream.  I'd catch up with him later at a section of river that produced faster moving water.  Now with riffles to hide my false casts fishing became a little easier.  Danny stopped and guided me to my first fish.  After that, fish became more plentiful.  So much so I lost count on how many ended up landed. 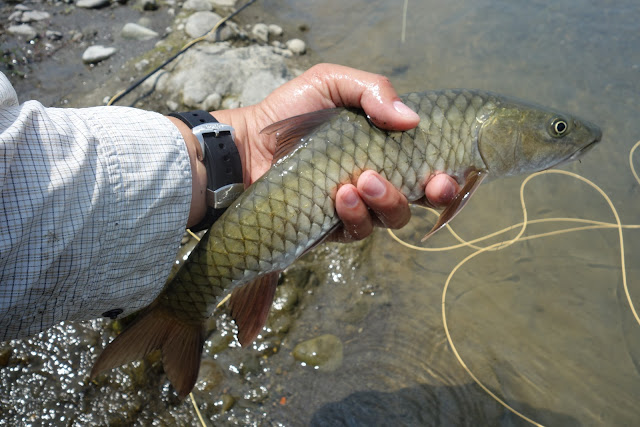 We'd split up again once he knew I no longer needed his help.   We came across a section that Danny told me held fish in the 50cm plus range.  Danny would end up landing fish in the 45 inch range.  I'd get a big enough fish that straightened out my size 8 TMC 101 hook. 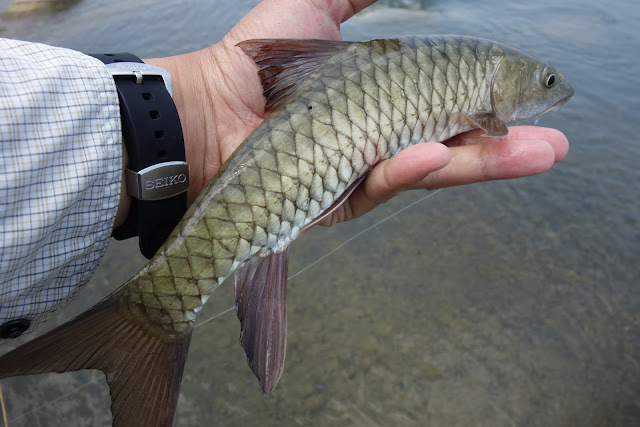 Danny is an engineer by profession and his approach to fishing reflects that. It' very methodical.  His approach to mahseer is different from Donny's and Cash's.  First he fishes only dry flies.  A Beetle fly specifically tied with a nonslip loop knot.  He casts upstream and strips in the fly.  Pick up line and shot line with minimal or no false casts.  Once the fly passes the zone  take one step slowly forward and cast again methodically from left then to the center then to the right.  Take one slow step move forward and repeat. 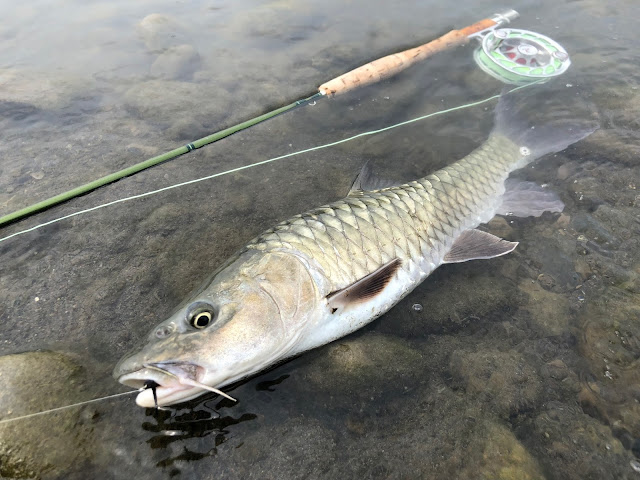 We stopped fishing just downstream of the section Danny and I had stopped on my first outing.  I have no ideal how many we landed this day but it was significant.  Mahseer are extremely difficult to catch and most anglers in Taiwan are happy to get a couple an outing.  Most anglers on the Taiwan Fly Fishing pages don't actually believe Danny catches the numbers he does.  They think he's full of it.  Of course I've witnessed it firsthand so I know that's not the case. 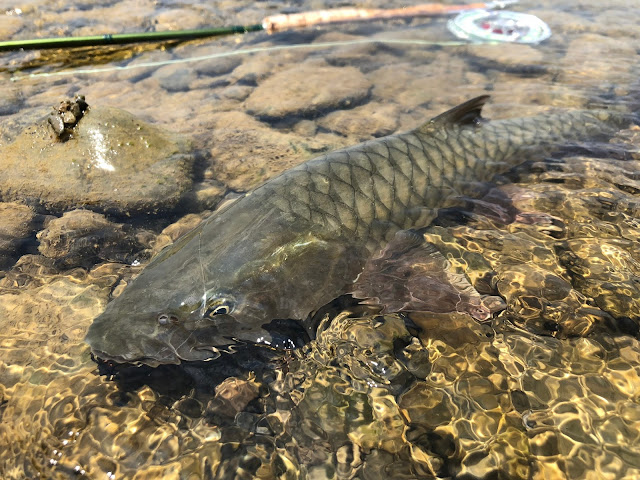 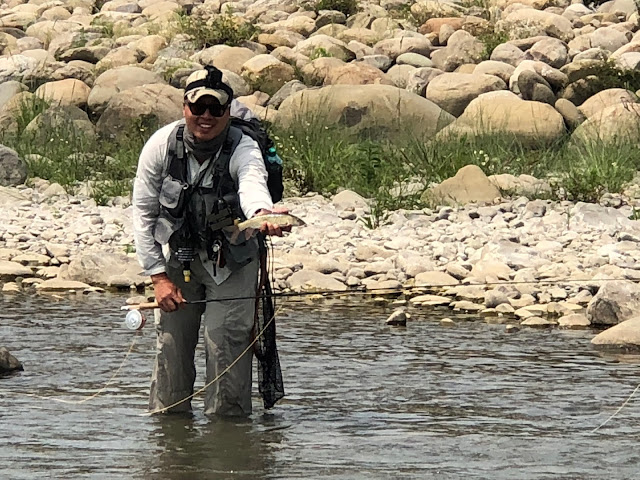 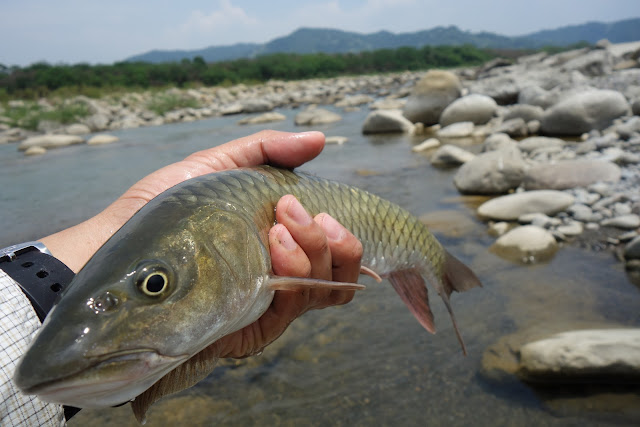 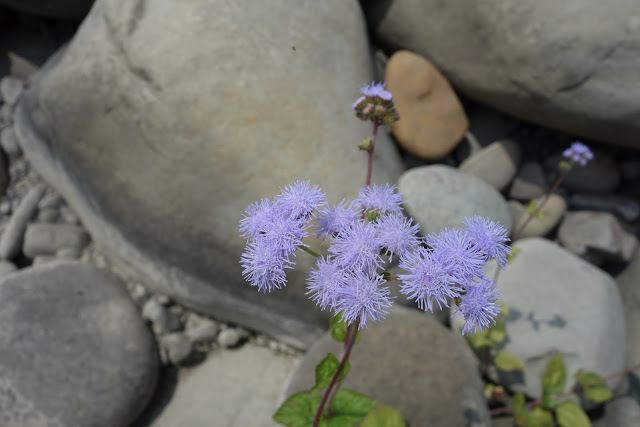 Posted by gourmetsportsman at 9:02 PM