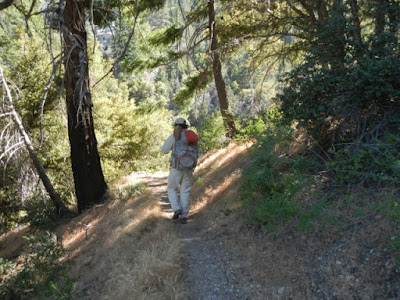 It's been years since I've backpacked into the wilderness in search of wild trout.  The last time must have been at least 8 years ago when Joel and I hiked in the middle of the night to reach Sespe Creek.  When we awoke from camp the the next morning we were in awe of the beauty of nature that was not too far from LA.  After exploring the water, we quickly found out that the water was devoid of any fish.  Our weekend trio was then cut short and we hightailed it out of there.

This trip would be different.  At least here I knew there were fish.  I've caught them and Chul had caught some seriously legit fish the weekend past.  We wanted to get in deep and see if we could find some serious SoCal lunkers.  We made it to the trail head parking lot and opening the door was like opening a blast furnace.   While SoCal temperatures haven't reached Africa-hot yet, it was hot enough to make this trek not particularly fun.  To top it off its all uphill for the most part.

We made our way to the trail and the first quarter mile was a complete bitch, while the rest was no picnic either that beginning portion let you know what you're in for.   Having to wear an old pair of Simms wading boots since the aquastealth soles of lightweights are peeling off, in no time the old guide boots were causing me problems.  I could feel the back of my right heel rub and I knew that wasn't going to be good.  Luckily Chul had brought his first aid kit; I had forgotten mine.  Resting in the shade I took off my boot and placed some moleskin on the hot area.  Unfortunately this was little help.  We stopped again and I put some additional gauze padding and tape on the affected area in the hopes it would relieve some of the pain.  While I was putting my boot back on when Chul spotted a pool below us with a lunker within.  We were elevated quite a bit from the water so even spotting a fish would be difficult.  We knew this was one of the stellar fish we were after.  We hiked a short distance looking for an easy way down.  Once we found it we took off our packs and rigged up and made our way down.  Not exactly sure which pool it was Chul took the lower pool and I took the upper one.  The first fish to take my size 12 Madame X was a solid 10-11 incher.  Than another that must had been its twin.  Finally  the beast took the fly and caused such a commotion within this tiny pool, splashing water everywhere.  He was the aquatic equivalent to  a wild mustang trying to be broken.  The Sage SLT 1 weight was bent to the cork and I finally brought the fish in.  I managed to get my hand on it and lifted him for a pic when he bucked and fell into the water below me.  That was the fish Chul spotted from above.  Trying a few more pools up we climbed up back to the trail to get our packs and move toward our campsite. 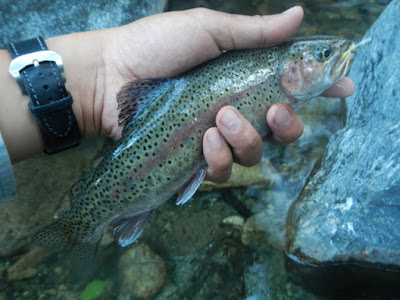 Before we made it to our planned camp, the trail finally merged toward the water so we filled our Nalgenes with treated water and moved on.  Walking a few yards on the trail, we found a suitable campsite.  Chul asked me if i wanted to just camp here.  After hiking on my bum feet, I was in no condition to continue. The heat had worn me down and I just wanted to fish.  His only worry was that Erica was to join us after work and might miss our campsite and go to the predetermined one instead.  However that was unlikely his tent and my bivy would be clearly visible from the trail.  Chul marked an big arrow with sticks and I told him to hang his bright orange tent sack on the tree next to the trail.  He left a note for her to stay there and that we would be fishing upstream.     With only about an hour of so of light we chose to make camp here and start fishing.

Making our way to the stream Chul gave me the first hole that held a monster fish.  I moved into a suitable casting position and I could see him at the end of the pool just under the boulder's undercut.  I made several casts caught beast.  Measuring at least 12 inches, this rainbow was fat and healthy.  The picture, as it never does, does not convey how really big it was.  Chul had moved upstream fishing a pool and when I reached him, we asked each other how we did.  He had caught a true beast.  we showed each other our pictures and I was amazed at his fish.  It must have been a 14 incher.  We continued upstream, catching respectable fish along the way, though non as great as the ones we had just caught.  Our casts and movement were clearly affected by our worn out bodies and we decided to quit after about a quarter of a mile or so of fishing and made it back to camp. 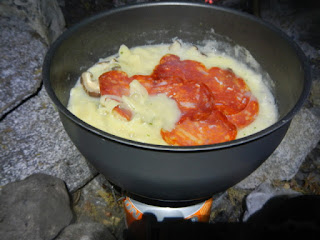 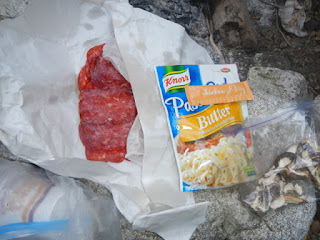 Erica had no made it to camp when we made it back to camp.  We decided to give her 30 minutes before Chul would start looking for her.  Sitting there we rested our bodies and talked about the fish we caught particularly the one that I couldn't take a picture of.  After Chul headed back on the trail in search of his girl.  I waited a bit and I noticed I was low on water so I headed to the stream to fetch some for dinner.  When I returned the two were already at camp.  We prepared our dinners.  They were having backpacking food, Turkey Tetrazzini from Mountain House.  I, on the other hand, refuse to eat that stuff unless I really have to so I shopped for real food.  I bought some imported Italian spicy salami, dried shitakis, some crappy instant noodles and instant mash potatoes conveniently packaged in its own cup.   Normally I would never eat these instant foods but if I had a choice between backpacking food or instant market food, I would choose the later.  We sampled each other's food and I was surprised that the Mountain House was somewhat edible.  Things must have changed since the days when Joel and I were eating that crap.  Maybe we just chose the wrong brand.  On a multi day trip I'll have to remember to pick up Mountain House brand food.  Chul let me know just avoid the rice entrees and stick to the pastas. 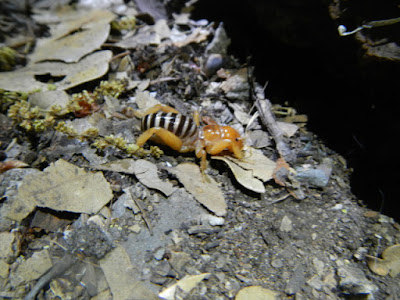 We chatted for a while before heading to bed before Erika noticed a Jerusalem cricket, an alien looking bug that apparently has one nasty bite, in our campsite.  As we any proper fly fishermen, Chul and I started thinking of materials to make a fly to represent it.  Although it might be a waste of time to make a pattern of it as, from what I have now read, they are nocturnal.  It might be fun just to tie one just for the hell of it and see what happens.