With a bad taste in our mouths from our MVL outing on Thursday, Chul and I wanted to head out for some fast action on wild trout.  Our plan originally was to hit a mountain close to home on Friday but since Chul thought rather than go after dinks we should head out to a further mountain stream where respectable fish can be caught.  I agreed and we changed our plan for a Saturday all day outing.  As I woke up on Friday feeling like crap I was glad that the plan changed, not to mention the fact that I have heard recent reports that serious fish are being landed here.

Saturday morning I woke and drove to Chul's and we headed out for the hour and half or so drive to the mountains.  Its such a pain to get here from where we live that I rarely fish here as much as would like especially since gas prices are what they are now but big fish live here.  I have personally witnessed a 18 inch fish spook out of the undercuts and have seen some photos of 20 inchers on the internet.  That is unreal for Southern California where a 10 inch wild trout would be considered a trophy.  We managed to reach our destination to find out that the second gate was closed and so we had to make a short hike to the water.  Once we made it to the trail we saw one fly fisherman rigging up on stream.  Our plan was to get in deep hiking on the trail til we found a decent entry point to  hit the water.

We finally found one and made our way down, cautiously looking out for rattlesnakes.  Chul lead the way and said at least if he startles a rattler it will most likely strike me as I followed behind.  Thanks pal.  Making it down without incident, we fished the first hole we saw.  I managed several out of my hole including one with a large bump on its head.  None were of the big fish we were hunting but nonetheless they were fun.  Much of the fish were the same as we moved upstream.  Chul managed to find a pig in some pocket water, we ended up spooking it but we managed to see its wide tall fat body flash as it moved.  Unbelievable.


We continued, excited about seeing a beast while looking for another.  The fishing continued to be great and while we were catching several fish in the 8 to 10 inch range we were still on the look out for the pigs.  Although I considered fishing nymphs before this outing I decided to keep my intrgrity intact and stay with dries.  I refuse to fish subsurface on our local waters.  Simply refuse.  Chul rigged up a dropper on his stimulator.  We found a deep pool and I began fishing the mouth.  I landed several good fish while Chul spotted me on the ledge of a granite boulder.  With a good vantage point he spotted two pigs in the submerged structure below.  After my fly cooled down I told him to fish his set up.  In no time Chul had one of those pigs on his dry.  It was a bit comical trying to see him land this fish that refused to give up or even to let him take a photo of it.  Once he finally got his fish and picture we moved on.
Moving upstream we continued to get more fish, many in the 10 inch plus range.  I managed one at least 12 inches maybe more but not much in the mouth of another large pool.  These fish do not quit.  They continue to fight.  They do not like being held and struggle as you try to remove the hook out of its mouth.  Chul helped me land his one and held it just long enough for a photo.  These fish definitely have spunk.  We debated beforehand on whether or not to bring a net.   We opted for leaving it behind.  That was a mistake that we will not make the next time.  Toward the end of the day I was coughing up all my insides as the smog was unbearable.  The winds must have pushed all that to the mountains.  I was having a hard time not choking.  You try to escape the city and it still finds you such is life in and around SoCal.  It was a long day and I didn't get home until about 10pm after Chul and I had dinner near his house.  It was a long day but a good one.  Hopefully we make it back there before it gets Africa hot out there.  The plan though is to camp out there one night so that we can thoroughly work that water without being rushed to do so and find some more of those lunkers.  We both lost several good maybe even great fish today including Chul's last cast of the day.  That one was a pig.  We will be back for them. 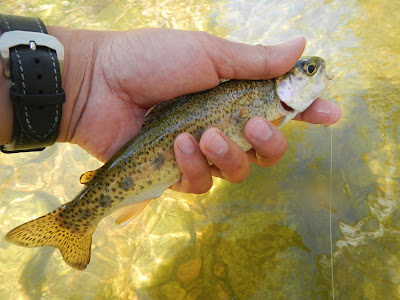 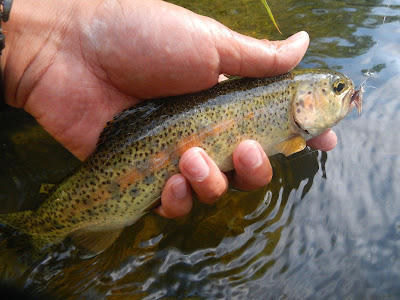 Posted by gourmetsportsman at 11:27 PM