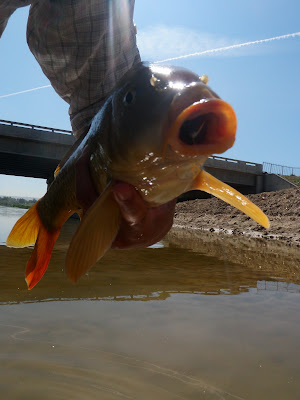 Chul and I had the intention of returning to Mission Viejo Lake today but due to today's trout plant the lake is closed to fishing.  I don't care for stocked trout and so I'm a lttle bummed that we couldn't go after those monster bass.  So we'll just have to wait until tomorrow.  We decided instead, since we both had a itch to fish, to try our luck at the local carp populations.

Our plan was to meet at 1pm but I arrived a little early and instead of waiting for Chul at the parking lot I decide to check out the waters as I waited for him to get off work.  I wanted to see if the waters were even fishable.  I was uncertain how well the fishing was going to be due to all the rain we had this weekend.  I thought it might be pretty useless but I was quite surprised to see at least one section fishable, clear and shallow.  Conditions were perfect- sunny and with no wind. 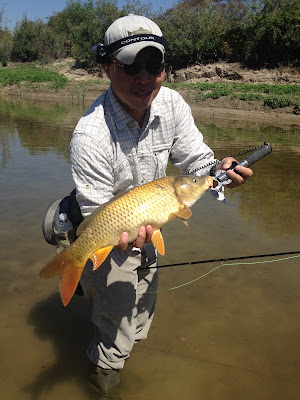 I thought to myself, this is the day Chul we get his first carp, Tuck better get his beer ready. I fished until Chul showed. The fish were rather tight lipped and fish were unimpressed by even the most perfect presentation. Eventually I felt the line go tight and at first I thought I hooked up on some vegetation, but then it started to fight and I was on a carp.    Since I was fishing my early model Abel Pt.5 with no outgoing click, I was unable to enjoy listening to the reels scream as the fish ran. I still don't understand Steve Abel's rationale for not adding the outgoing click. I've yet to hear another fly  fisherman say the same thing. I once asked him at a fishing show and he told me he wanted to hear the line going out of the guides. Who the fuck cares about hearing the line going out of the guides?
The 4lb carp gave one hell of a fight when it finally decide it wanted to fight.  I landed him and moved on to the other fish stacked up in the hole.  I saw Chul make his way down to the water and at that moment I felt the line go tight just for a second and came unglued. 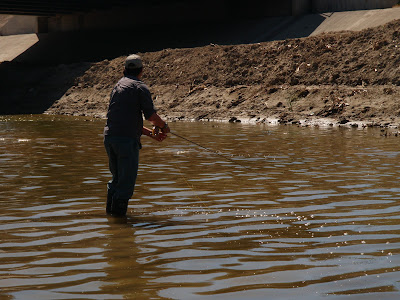 Chul finally made it on the water and told him where to fish.  He could see some near the bridge and he started to fish there.  I stayed at the same spot.  In time I managed another.  The same thing again, I thought I had hooked up some vegetation and all the sudden the line began to run.  Again it took some coaxing but the fish became feisty.   I managed to land him and it turned out to be a nice chunky 5 lber.   At this time I gave Chul a Prince Harry Aggravator and started to help him out.  The wind started to pick up now.  I tried to get Chul on some fish but conditions began to change and the fish were starting move away for this prime area.

I ended up losing another and also what appeared to be a baby bass.  Chul fished under the bridge as I moved to an elevated position to see if I could spot him some fish.  He managed to hooked up on a juvenile bass that came off the hook just in front of him.

By this time it appeared the fish had moved on and so we followed.  There were casting opportunities but none would take.  I could see from my elevated position that there were some huge fish.  None though would honor either of us.  We made it down stream abit before we realized that this piece of water sucks now.  Chul suggested we move back to where we started.  It was a good plan.

Chul fished again under the bridge.  I moved to some extremely skinny water upstream and to my surprise it held fish.  A lot of fish.  Big fish.  I tried casting to them but none were eating.  It looked like a Salmon river stacked up.  I was shocked.  After I realized that they were going to take a fly I went back to Chul who let me know he had one and it went unbuttoned.  Ahh that hurts.  He hadn't strip set the hook, he set it like a trout and it may not have penetrated enough to stick. 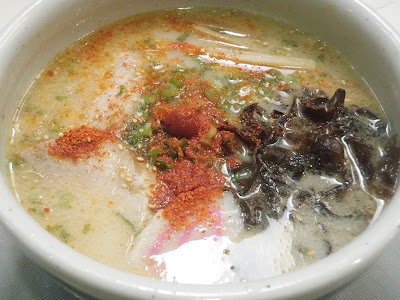 Eventually we called it a day.  I tried to comfort Chul that it took me something like 10 or so tries before I landed my first carp.  So I understand his frustration.  The problem,today, is the conditions changed right when he arrived.  One of these days,its bound to happen.  He's better off not fishing with me as I'm apparently the WORST GUIDE EVER and I'm probably just bad luck to him.  Well, at least for Tuck, he doesn't have to owe him a beer...yet.

Afterwards it was time for ramen which for Chul probably was the best part of the day.  Even though I had a good day, I am a little pissed though that my contour did not capture my two fish on film.  I know for a fact it was ON when I hooked up.  For whatever reason the camera did not capture any of them.  I'm pissed.  Maybe the card was too full and shut off automatically, who knows.  Maybe because its made in China and therefore its a POS.  Lame.  Oh well.  Tomorrow Chul and I are after big bass at Mission Viejo Lake.  Hopefully we land some.
Posted by gourmetsportsman at 8:46 PM