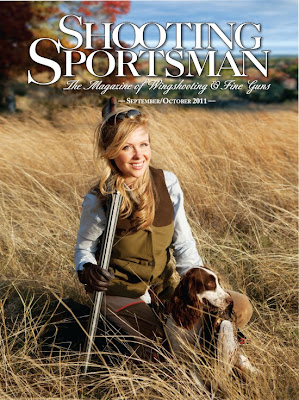 I'm a person who never throws away magazines.  In fact my house is littered with magazines over 20 years old.  I just can't bring myself to do it.  Its like burning books to me.  It just seems wrong.  Because of this I decided not to renew any of my magazine subscriptions once they expired.  So no more Revolution (it's a watch magazine, not some leftist magazine), WatchTime, Time, Bon Appetit, Wild on the Fly, Double Gun Journal,  Pointing Dog Journal, National Geographic, Nat Geo Traveler, among others.

One in particular, Shooting Sportsman, I'm quite pissed I left go, at least for one issue.  I let my subscription pass about a year ago and now I find out in the Sept/Oct 2011issue, SS had one of their best covers ever.  It featured Georgia Pellegrini holding a side by side along side a Springer Spaniel carrying a pheasant.  Of course this issue comes after I end my subscription.  Typical.  The article can be read here. 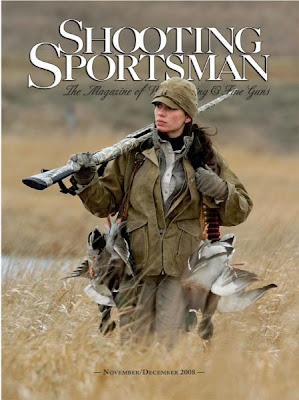 This is the only the second time a female has graced the cover of SS.  The first caused quite a stir in the Fine Gun community.  Not so much because of the female but rather for showcasing an auto on the cover,  a  camoed auto no less.  The horror.  That is quite blasphemous for a magazine devoted to fine guns.  I still have that issue and will gladly trade for the newer one with Georgia.  I guess SS learned their lesson and made sure to have a double, a side by side no less, predominately showcased this time.

If you scour the forums of SS and Notssmbs you can find the threads with all the frustration, although they may be gone since I've not frequented these boards in many years.  SS had to make some real quick PR moves to quash the backlash.  Here is an article on the first cover.  I guess sometimes life can be pretty pointless and we find some of the most trivial things to get angry about.  It just shows we have too much free time on our hands.  But for the record, there should never be a camoed auto on the cover of Shooting Sportsman.  The ladies, on the other hand, there should be more.

Posted by gourmetsportsman at 9:34 AM

Email ThisBlogThis!Share to TwitterShare to FacebookShare to Pinterest
Labels: duck hunting, fine shotgun, side by side, wingshooting