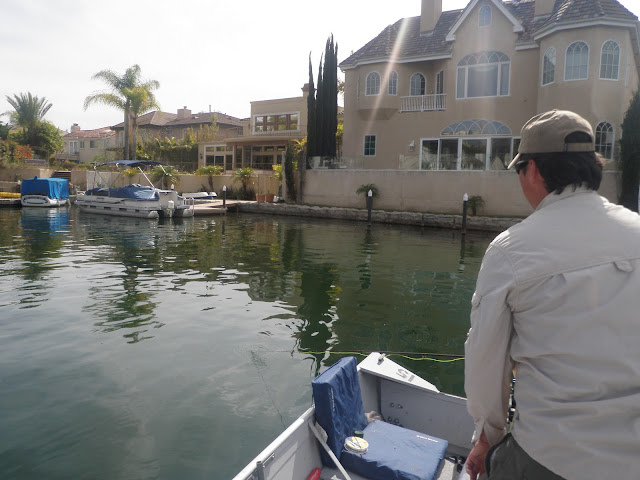 I was fortunate to receive an invitation to fish Mission Viejo Lake this morning. Since only members of the Mission Viejo Association are permitted use of this lake, I am lucky to know a member. The lake has been stocked recently with rainbow trout from Nebraska Tailwalkers. Chul calls them ghetto steelhead, they are large shouldered fish with tiny heads. Although the lake has been stocked with them, my interest laid elsewhere. In particular the monster bass that live there. For years I have read about 8 to 16 lbs bass being pulled out of the lake. This was my focus. I could care less about stockers. I wanted my chance at a big bass or any bass for that matter.

Chul has fished here since he was young but has never caught a bass on a fly rod. To my recollection one of my first ever fish on a fly rod was a bass. I, for one, have always had a love/hate relationship with bass. I love the way they fight. I love the predictability of them. I love their never quit attitude. But I hate the ugly environments they live in. I hate the hot climates they are found in. I hate dirty water. Given all this I still love catching bass on a fly rod. In Southern California, unless you have a deep sea boat, the best fishing is for bass. So I go after them. 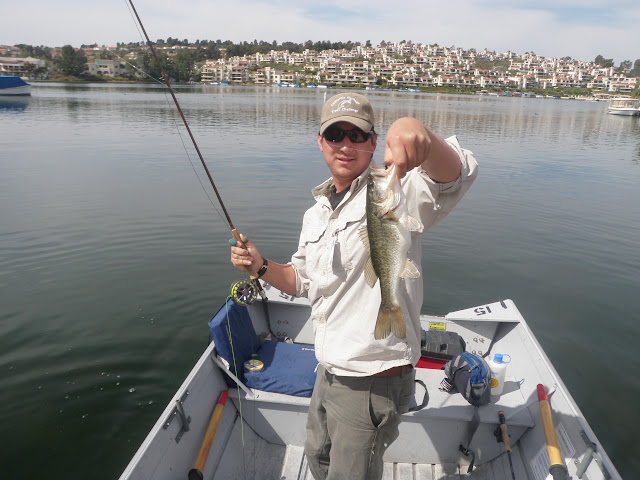 We began fishing just past 8AM. The lake is pretty clear and we spotted a few I the shallows. There were no takers in the morning. In one of the coves we saw a pair of monsters, at least 8 lbs but could have easily been much more. I casted to them but they didn't even consider my offerings. I started with the Scott S3S 7WT with a purple Burk's V-worm then to a Foam Rabbit Tail fly. Eventually I tired of casting the big rod and moved to my favorite T&T Helix 5WT SW with the ASS fly and then Rattle Shad. I got a couple bumps but no serious takes. I switched to a purple bunny leech and fished that the rest of the day. Chul fished one of my propellor clousers and later switched flies. He managed his first bass on a fly rod on his 6 WT with a small black wooly bugger. In the same cove I had a serious take that bent the rod pretty good. Unfortunately Chul was maneuvering the boat at the time and I could get a good hook set as we were moving in a circle. The next cove over I did manage to set another bass. It was smaller and I managed to get to the boat before it went unglued. Afterwards I had several bites but was too slow to set the hook. The action all started after the sun peaked out of the clouds and heated the waters.

We fished until 2PM, about 5 or 6 hours and it only cost us $25. For a guy who has paid around $100 to fish Barrett and Newport Bay, MVL was a bargain. I look forward to hitting this place up again now that I have a little better idea on what I should expect.
Posted by gourmetsportsman at 3:43 PM