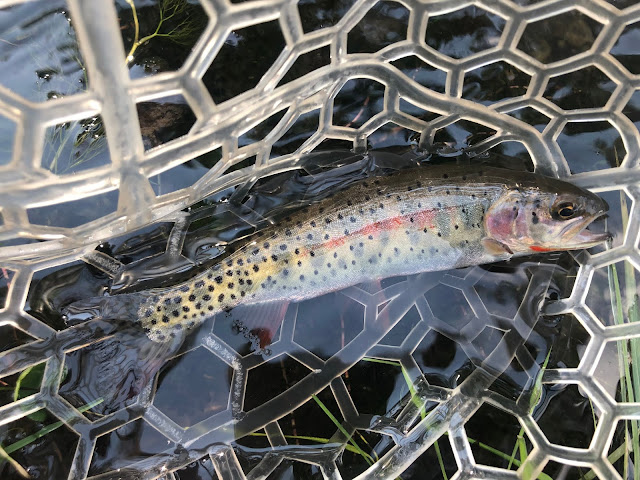 Having failed at documenting my first Rio Grande Cutthroat we planned a return to the small tiny water the following morning.  This time we would pass the landmark that Curtis told us about and begin fishing from there. 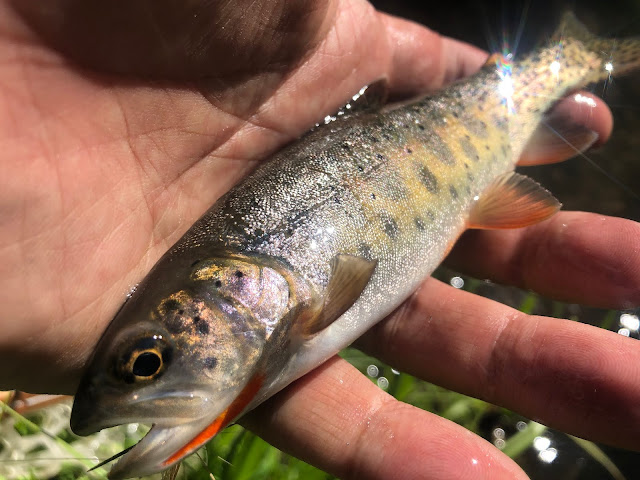 We got up and drove to the water with the intention of only fishing a couple hours before we started to head north to the San Juan River.  This water is tiny and at the widest section maybe three feet in length.  Most of it maybe only 18 inches in some areas.  Despite the narrowness of it Curtis did tell us there are sections that were deep.  Several feet deep.  So there are opportunities for fish in the 18 inch range but most would be dinks with a 12 incher being a very special fish. 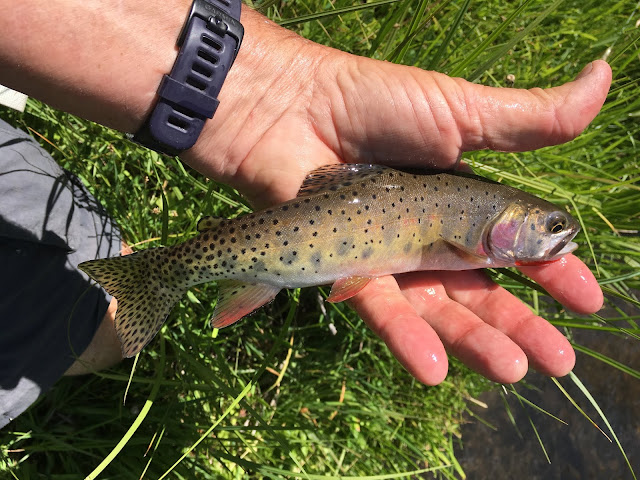 I really wanted the small fish stage of the trip to end but since this was the closest and most convenient area to get a cuttie I would just have to suck it up.  We started hiking down the trail past the landmark and began fishing almost immediately.  It wasn't long before we were on some Rio Grandes. For the next few hours a combination of cutts and browns would take our dries.  Fishing wasn't hard but it was challenging to make some of the casts when the wind began picking up.  Most of the time the fly would land along the bank in the grass and all you would do is slowly yank it out so it would land in the water.  Kelly would get the biggest fish out of the both of us in the 10 inch range. 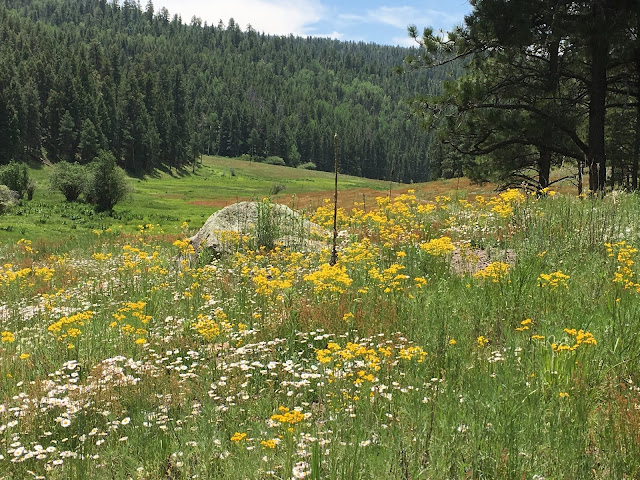 By around lunchtime we started to head out and make our way to the truck.  We  would make our way northwest toward the San Juan River. 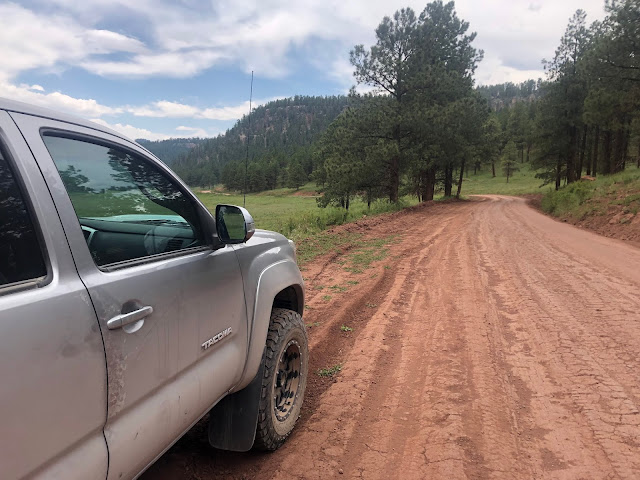 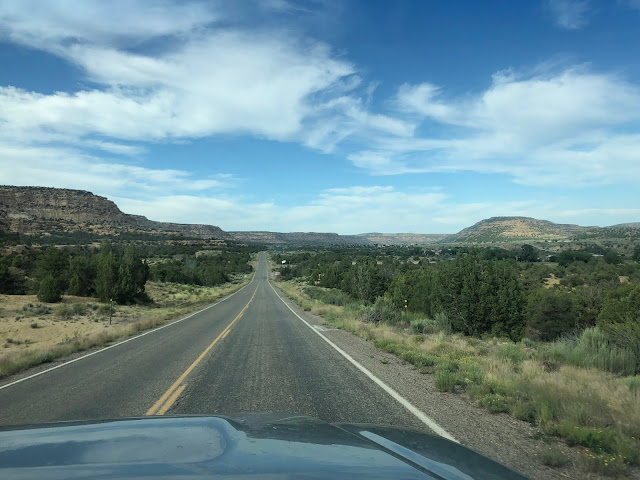 We drove from elevation to the desert watching the landscape change as we past it by 75 miles an hour.  After a pitstop in Farmington we headed toward the Navajo Dam to Abe's fly shop for so supplies and intel. 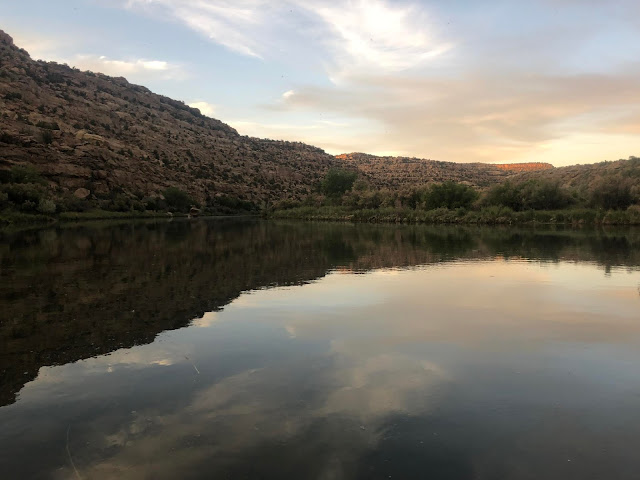 I picked up some flies and the shop suggested we fish the BLM section of the river to avoid some of the crowds.  To do so though required a $6 fee which we gladly paid.  Afterwards we went to the campgrounds along the way to secure a site before heading to the parking lot to rig up.  We would only have a couple hours or less of light to fish.  I got on the river and almost instantly I was attacked by mosquitoes.  I was trying Euro-Indicator nymphing.  Not Euro nymphing.  Euro-Indicator nymphing uses a dacron section as the indicator and is primarily used to fish in the shallow waters of the San Juan although it can be set up for deeper water as well.  This is a fishing technique I saw on YouTube and decided to try it out.  It wasn't long before I got a hit but lost it after the first run.  Not sure if the micro hook was at fault of what but I lost my first chance at getting my first San Juan fish.  I moved up with no luck and started to see fish rise but had no luck in getting any of them interested in my fly. 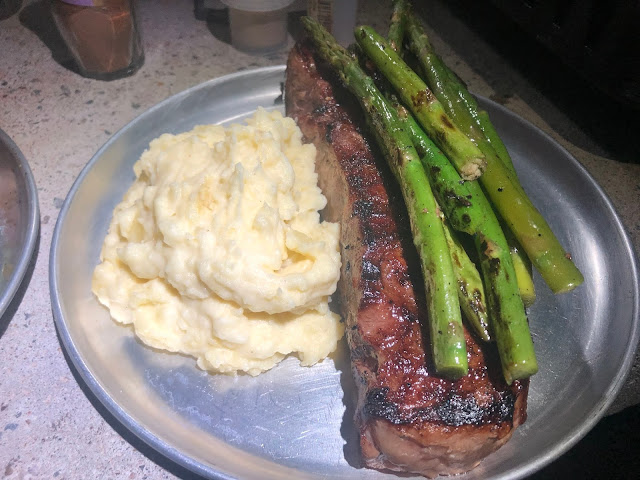 Just before dark I quit and headed back to the truck.  Kelly had given up early frustrated by all the mossies eating him alive.  I was wearing insect repellent clothing from head to ankles which included a buff but still got hammered on the hands where I was unprotected.  We made camp and dinner before calling it a day.
Posted by gourmetsportsman at 8:20 PM